Skip to content
You are here
HOME PAGE > 01 FEATURED > Horse Racing Exclusive – Opinion: The 154th Belmont Looks Like A Snoozer 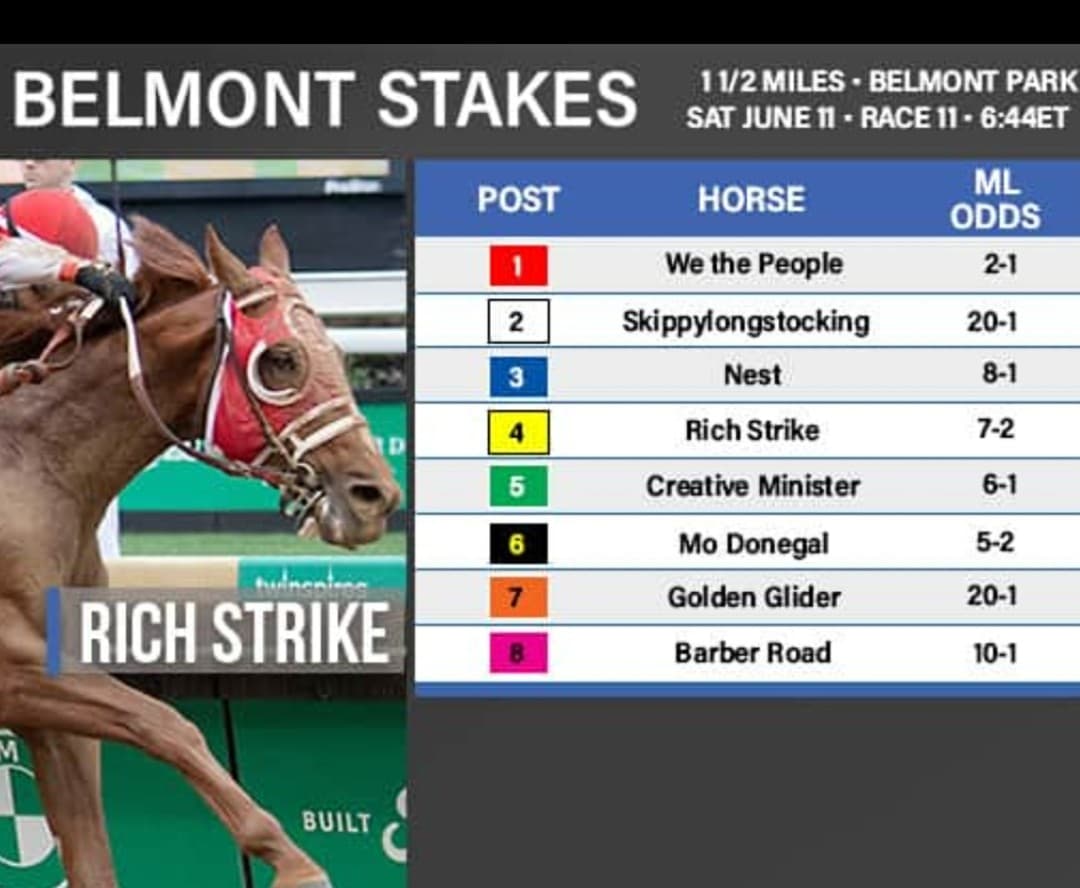 Yawn, stretch, yawn describes my excitement level for the 154th running of the Grade 1 Belmont Stakes. The ten-horse field is now down to an eight-horse field comprised mainly of upper level allowance horses, and three Kentucky Derby contenders, including the 80-1 winner, Rich Strike.

Hall of Fame trainer Todd Pletcher sends out two decent graded stakes horses in Mo Donegal and the filly, Nest This pair finished 5th in the Kentucky Derby and second in the Kentucky Oaks, respectively, in their most recent starts. Mo Donegal got a horrible trip in the Derby and should have a better outcome in New York. Nest was runner-up to Secret Oath in the Oaks and we know that the Oaks winner was not successful in her two starts against the boys.
Rudolphe Briset sends out Grade 3 Peter Pan winner, We the People. That victory in his most recent start over the Belmont track earned him the morning line favorite status at 2-1. It also led to world-famous chef, Bobby Flay, purchasing an interest in the horse. We the People is the only frontrunner in the entire field. If he pulls off the Peter Pan/Belmont double, it will put him in the company of stallions like the great A.P. Indy.
Creative Minister is a late-bloomer who finished third in the Preakness in just his fourth career start for trainer Ken McPeek. And, Barber Road, who was most recently sixth in the Kentucky Derby, will run for trainer John Ortiz with jockey Joel Rosario up. This is a significant jockey change from up and comer Reylu Guittierrez. Most believe it is an upgrade that could put Barber Road in contention.
When Etheral Road and Howling Time were pulled from the starting lineup just days before the draw on Tuesday, that took two of the longshots from consideration at morning line odds of 20-1 and 30-1. So the likelihood of an upset resulting in any sort of hefty payout is pretty slim. Yawn, again.
I suppose the only real excitement in this contest at a grueling mile and half comes from watching Rich Strike attempt to prove he is not Giacomo, the one-hit wonder. Trainer Eric Reed says the Belmont was always the goal for Rich Strike. By stallion Keen Ice, Rich Strike appears to relish the longer distances. So, can he win? Let’s discuss.
While I do not believe Rich Strike is a one-hit wonder, I do not see him as a lock to win the Belmont. Rich Strike got both the perfect set-up and the perfect trip in the Kentucky Derby. The suicidal fractions caused a meltdown of epic proportions from all the frontrunners except Epicenter, and it certainly compromised him.
Rich Strike has exactly two wins to his credit and both came over the Churchill Downs surface. And, jockey Sonny Leon has never ridden a horse at Belmont. Inexperienced jockeys tend to move too quickly in this long race over “Big Sandy” where the stretch seems to go on for decades at 1097 feet.
However, Rich Strike is well-rested, turned in a nice work at Churchill Downs last week in front of a big crowd, and seems to have settled in nicely in New York. I have no doubt he will like the added ground. But the race setup is a definite detractor for me, as well as his running style. I cannot and will not wager on him at low odds. I will, however, include him in my exotics.
With the exception of We the People, this is an entire field of stalkers and closers, whose running styles are not conducive to a fast pace, and should not result in fast early fractions. In recent years, however, the Belmont has mostly been won by horses fairly close to the lead who can grind, grind, grind.
I suspect We the People will be able to go to the lead and throw up modest fractions with a decent position. Is he talented enough and does he have the stamina to close the deal and take them gate to wire?
We, the people, shall see on Saturday!