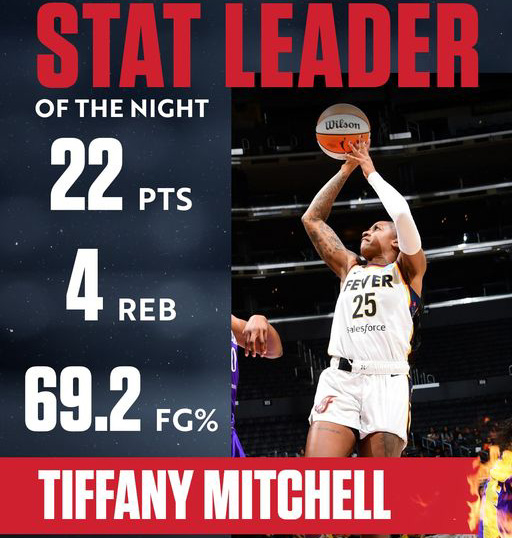 LOS ANGELES – Fever guard Tiffany Mitchell has notched three games scoring in double figures in her last five outings. The seventh-year guard came off the bench in Tuesday’s 86-79 loss at the Los Angeles Sparks to finish with a season-best 22 points on a career-high nine made field goals. Mitchell scored 16 points in the first half as well to tie her best first-half point total in her career.

Tuesday’s loss dropped the Fever to 5-23, while LA improved to 11-14 after taking two of three regular season matchups against the Fever.

Neither team owned a lead larger than six through the first three quarters on Tuesday night at Crypto.com Arena and was tied 68-68 with 8:09 remaining in the game. Los Angeles put together a 10-0 run over the next 3:48 to eventually solidify the victory.

Emma Cannon came off the bench to pitch in 10 points for her fourth game this season scoring in double figures. Indiana reserves outscored the shorthanded Sparks bench, 34-17.

Los Angeles was paced and guided by Nneka Ogwumike’s season-high 35 points on 12-of-20 shooting and 9-of-11 free throw shooting clip. Jordin Canada added 11 points and a game-high eight assists, while Chiney Ogwumike was inserted into the starting lineup to finish with eight points and 10 rebounds.

MEDIA
The recordings of Coach Knox’s pregame interview, along with the postgame media availability with Coach Knox, Emma Cannon and Tiffany Mitchell can be accessed on the WNBA Content Network.

UP NEXT
The Fever conclude the roadtrip on Thursday at 10 p.m. ET at the Las Vegas Aces

Thursday’s game will be streamed on the official Indiana Fever Facebook page and broadcast on NBA TV.