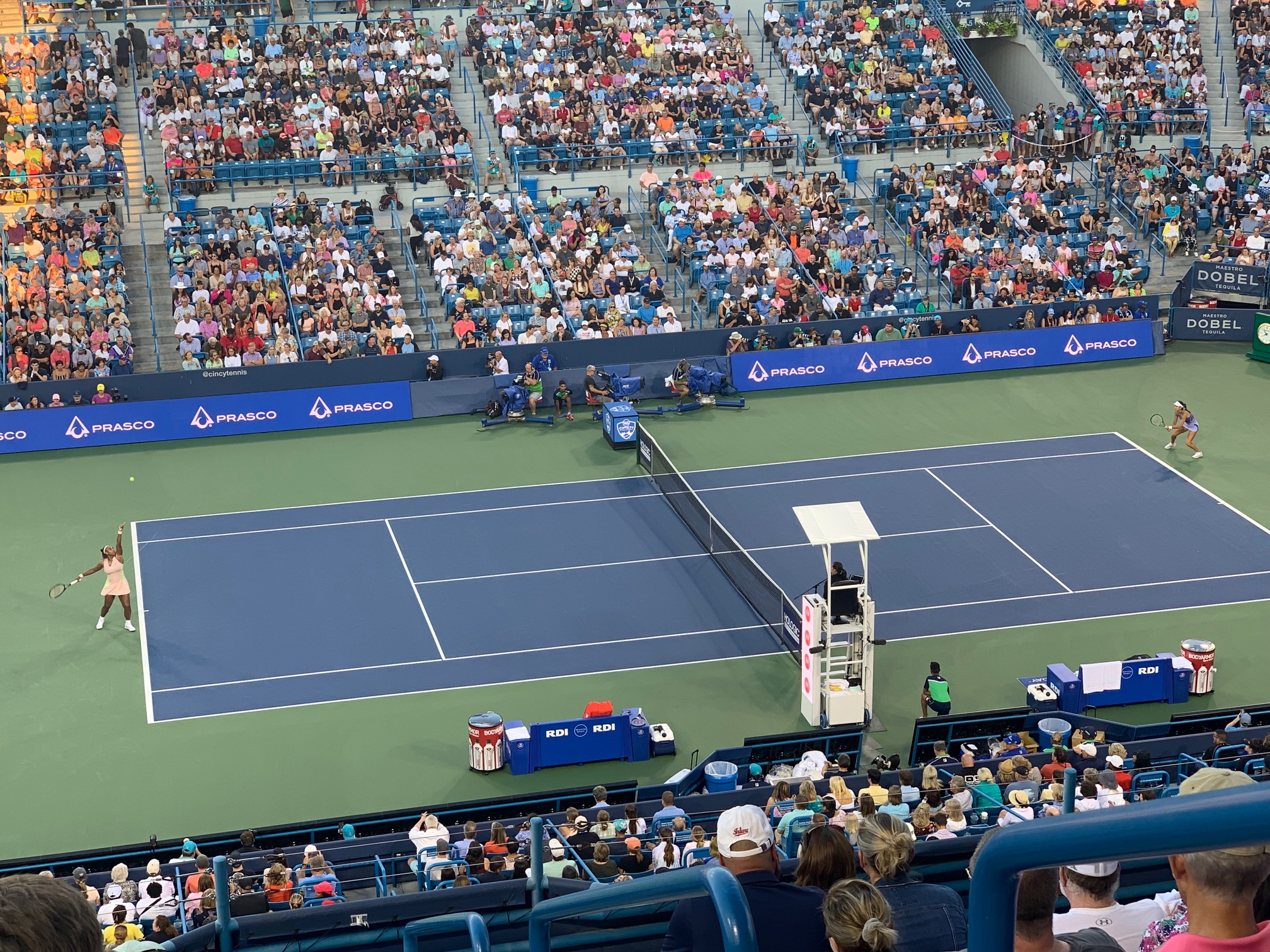 Most likely the last time many of these tennis fans (myself included) will see Serena Williams playing live and in person.

Let’s face it. This ATP Masters Series event isn’t some second-rate gathering of no-name up-and-comers or washed-up has-beens. You won’t find any pretenders to the throne sneaking into this prestigious field on a lark. Nope, the 56-person men’s and women’s draw features only the best of the best among the international tennis elite—all vying for a combined $7.8 million in prize money.

And to think that it’s happening just a scant couple of hours from Lexington. One of the most efficiently run, family friendly, open air sporting events anywhere in the country is located right in our own backyard. Gourmet food, live on-site bands, swanky merchandise galore, and plenty of midwestern hospitality to fulfill all your indulgent tennis fantasies.

The festivities are indeed fantastic, but it’s always the tennis players that bring the “WOW factor.” Ten former champions and 19 Grand Slam major winners provide for plenty of pop and sizzle.

Likewise, on the women’s side, you have big-name champions like Victoria Azarenka, Karolina Pliskova, Garbine Muguruza, and top-seeded Iga Swiatek all waiting to survive and advance.

Still…if that weren’t enough, you have the Williams sisters for the overkill. Venus, with her measly two US Open and five Wimbledon titles, and her younger sister Serena, with a record-setting 23 Major championships on her resume. To say they’ve had a good career run would be the understatement of the century.

The 40-year-old Serena remains amazingly competitive on tour but indicated she’s retiring after this year’s US Open to “focus on being a mom, my spiritual goals, and finally discovering a different, but just exciting Serena.”

That means Serena’s first round match at the Western and Southern Open against 10th-seeded Emma Raducanu could be one of her last. It also means drama, intrigue, and pomp and circumstance for every lucky fan in attendance.

As the GOAT—not just of women’s tennis, or men’s or women’s tennis, but arguably of the entire sporting world—Serena walked onto center court regaled like royalty, serenaded by thunderous applause from a stadium full of her adoring subjects. All that was missing was a wand in her hand, a tiara on her head, and a big brass band.

Against her opponent this evening, however, Serena’s game resonated more like an out-of-sync string quartet. Breaking at love in game one, Raducanu quickly jumped out to a 4 – 1 lead. Serena rallied briefly, but the unflappable reigning US Open champion refused to buckle, closing the first set out 6 – 4.

The second set proved even worse for Serena. Unforced errors, double faults, and shots sprayed well past the baseline became the norm. Despite the heavily pro-Serena crowd hoping for an imminent Raducanu collapse, the Brit pressed on—matching Serena’s power stroke for stroke while capitalizing on her opponent’s numerous shot-making errors. Serena never got it going, dropping the second set 6 – 0.

“You have to cherish the moment,” said Raducanu, when asked about playing a legend. “You’re going to have this memory for the rest of your career. I was really just trying to make the most out of every single point out there and give myself the best memories of when I played Serena once.”

Fairytale endings are never guaranteed. In fact, most of these end-of-career runs don’t end well at all. They’re often bittersweet, with the hero or heroine a mere shell of their former, unbeatable self. As fans, we want to always remember our idols in the prime of their playing days. But we also don’t want to ever miss out on any final fleeting glimpses of glory.

So, we root and cheer. We stand, clap, and salute. Whatever, the outcome, we feel we’ve all just witnessed a part of sports history in the making.

Well done, Serena. Well done, Emma. Thanks for taking us along for the ride.