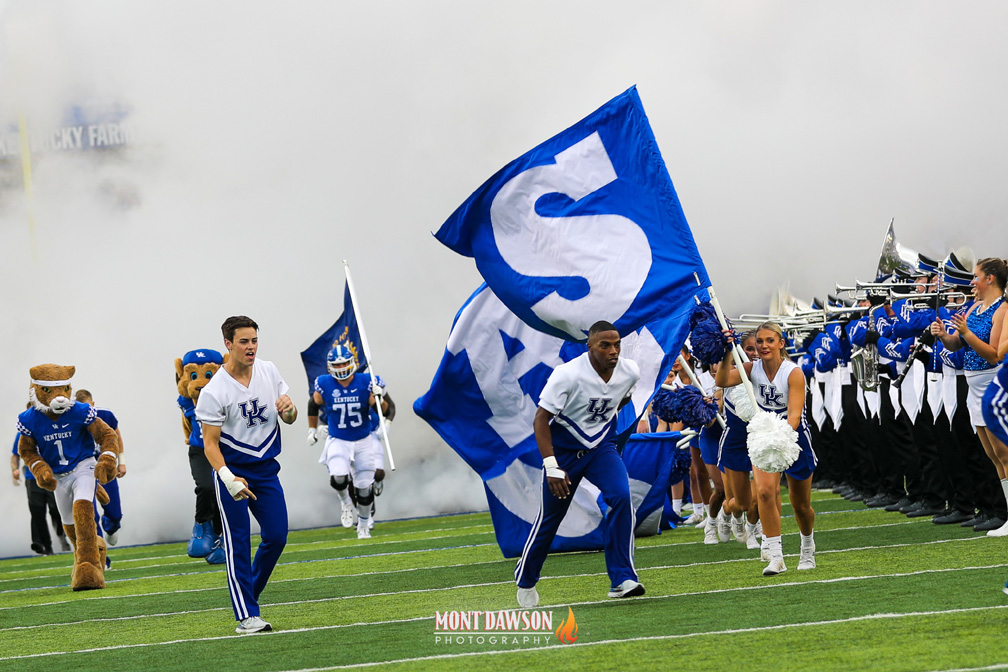 The 2022 Kentucky football season kicked off today as the Kentucky Wildcats faced the Miami (OH) Redhawks. After a successful season and a bowl game win against Iowa, the Big Blue Nation filled Kroger Field in support of this year’s team. The game may have been closer than the fans wanted, but the Cats still brought home the 37 to 13 victory over the Redhawks.

The win wasn’t an easy one for the Cats who were only up 3 points with the Redhawks at the half. The criticism fell on the offensive line for allowing Miami’s defense to get four sacks and many quarterback rushes on Will Levis. Despite the poor play by the offensive line, the receivers were as good as advertised. Tavion Robinson ended the game with 136 yards on 6 catches. Dane Key gained 53 yards on four catches which included a touchdown. Quarterback Will Levis, who was under pressure all night, threw for 303 yards on 21-32 passing.

The biggest play of the night was the 100-yard kick return touchdown by Barion Brown which was the first since 2009 when Derrick Locke against Louisville. J.J. Weaver was the defensive player of the game with a sack, forced fumble, and a blocked punt.

The win wasn’t a pretty one, but it was still a milestone victory for Mark Stoops, tying Bear Bryant in all-time wins at Kentucky. Stoops first three seasons at UK ended with more losses than wins, but Stoops brought in the right coaches and players to make Kentucky a SEC contender. After posting his first 10-win season many fans expected to take a coaching position elsewhere, however, Stoops showed his dedication to the program coming back to Kentucky.

Miami won the coin toss and elected to receive the football and made good on their first possession gaining 75 yards and scoring a touchdown in 13 plays on a 22-yard rush by Tyre Shelton. Kentucky followed with a quick 5-play touchdown drive on their own that ended with a 6-yard pass to Brenden Bates in the endzone. Kentucky made the first defensive stop of the night and continued their offensive drive to end the quarter.

Kentucky started the second quarter with the ball in the red zone, but gave the ball back to Miami on a interception by Will Levis. The Wildcat’s defense stopped Miami from driving down the field and were able to keep the ball on Miami’s side end of the field after a blocked field goal by J.J. Weaver. Kentucky settled for a field goal to take their first lead of the game 10 to 7. However, Kentucky would only hold the lead for 3:12 when Miami scored a field goal of their own evening the score 10-10. Kentucky finished the half on a 10-play, 77-yard drive that ended with another field goal.

Kentucky started the second half with a 100-yard kick-off return touchdown by Barion Brown to put UK up 20 to 10. UK’s defense then forced a fumble (Tyrell Ajian) that ended with an 8-yard touchdown pass to Chauncey Magwood to push the lead to 27-10. The Redhawks found success on offense in their first possession of the second half, but only could get a field goal. (27-13) Kentucky matched the field goal for the last score of the third quarter pushing the score to 30-13.

The only score of the 4th quarter came late with 7:46 left in the game on a 1-yard pass to Dane Key for his first touchdown as a Wildcat. This pushed the score out of reach for Miami and the Cats won 37 to 13.