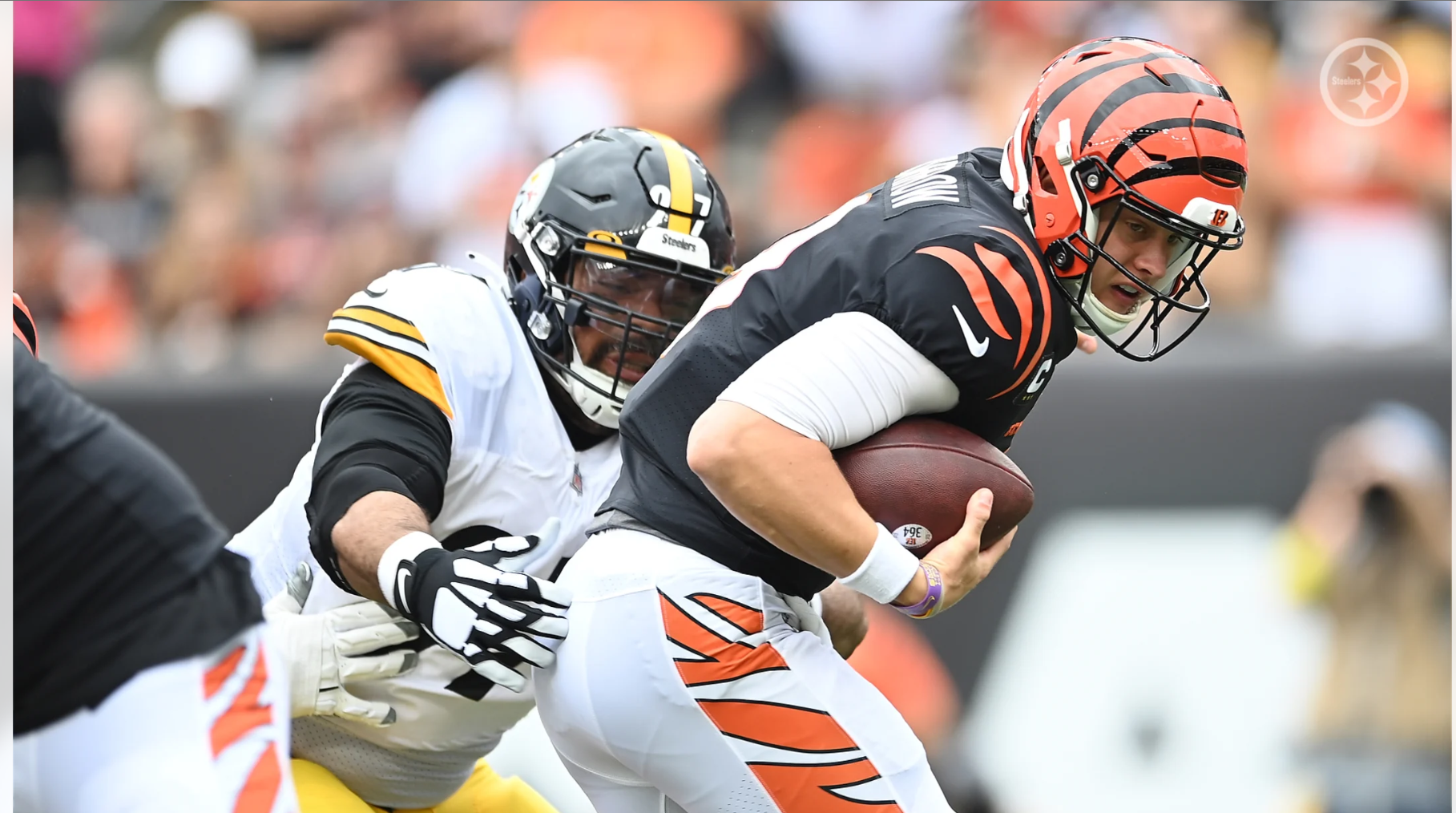 OUCH! Quarterback Joe Burrow running for his life on his way to throwing four interceptions and being sacked seven times in Cincinnati’s season opener against Pittsburgh (Photo Credit Abigail/Pittsburgh Steelers/Steelers.com).

Still Crazy After All These Years

(CINCINNATI, Oh.) – Nutso! That’s one way to describe the Bengals demoralizing 23 – 20 overtime loss to the Pittsburgh Steelers Sunday at Paul Brown Stadium. Correction—make that the newly-sponsored Paycor Stadium. Name change notwithstanding, the defending AFC champions bumbled and stumbled their way to a jaw-dropping, opening day defeat in front of 65,841 expectant fans celebrating the kickoff to what promises to be another wild NFL season.

The 106th meeting between the divisional rivals didn’t go quite as the Bengals had planned. Four Joe Burrow interceptions—one a pick-six—another sack fumble, a blocked extra point, and a missed game-winning gimme field goal off an errant high snap all added up to disappointment, dejection, and deflation to fans who deserved better.

Looking for blame? How about the Bengals newly built O-line? A veteran left tackle joined by three proven free agents and a highly touted fourth-round draft choice was supposed to bolster the Joe Burrow protection package. Instead, Burrow ended up running for his life to the tune of seven quarterback sacks. The first half was a virtual comedy of errors as Cincinnati gifted Pittsburgh to a 17 – 6 lead.

The Steelers—playing for the first time in two decades without quarterback Ben Roethlisberger—couldn’t capitalize on Cincinnati’s turnover fest. The Cincinnati defense, returning all eleven starters from Super Bowl LVI, played admirably throughout the afternoon—forcing numerous three-and-outs and continuously keeping the Steelers from tasting paydirt.

Here’s what was most frustrating to everyone in attendance. The Bengals boast one of the most talented passing attacks in the NFL. Burrow, in 2021, set single-season team records for passing yardage (4,611), passing TDs (34), and passing rating (108.3). Yet, the third-year pro appeared noticeably out of sync with his O-line and receivers. Perhaps it was the appendectomy early in training camp (he denied it) or the lack of reps in the preseason games (he and his coach also both denied it), but Joey Franchise couldn’t quite deliver on an afternoon where opportunities abounded.

Sure, Burrow stuffed the final stat sheet completing 33-of-53 passes for 338 yards and two touchdowns. And his favorite target—Ja’Marr Chase—picked up right where he left off last year with ten receptions for 129 yards and a touchdown. But when the game was there for the taking, the duo surprisingly fell short.

Even Evan “Money Mac” McPherson, after drilling kicks from 59 and 26 yards earlier in the contest, couldn’t get it done with the game on the line. The nearly automatic McPherson lost Clark Harris—his long snapper— to a biceps injury and subsequently managed to get his game-winning extra point attempt in regulation blocked while missing another game-winning kick wide right in overtime.

In a game where the Bengals outgained their opponents in total yards 432 – 267 and first downs 32 – 13, head coach Zac Taylor pointed out the obvious.

“It’s not the way we wanted to start the season,” he acknowledged. “But we’re smart enough to know not to react. When you lose the turnover battle five to nothing, I don’t expect to win many games. We almost did. So you’ve got to find the silver lining there.”

The Bengals better improve in all those areas because it doesn’t get any easier next week as they head on the road to play America’s Team at Jerry World. With difficult challenges, however, fortuitous opportunities often arise.

“That’ll be my first time playing in the stadium as an NFL athlete,” Chase said. “Overall, it’ll be fun. Getting to go in Dallas. I know a few Dallas players. So that’ll be pretty cool to see.”

Cool? Or crazy? After all, it’s the Cincinnati Bengals we’re talking about.

See you in Dallas.