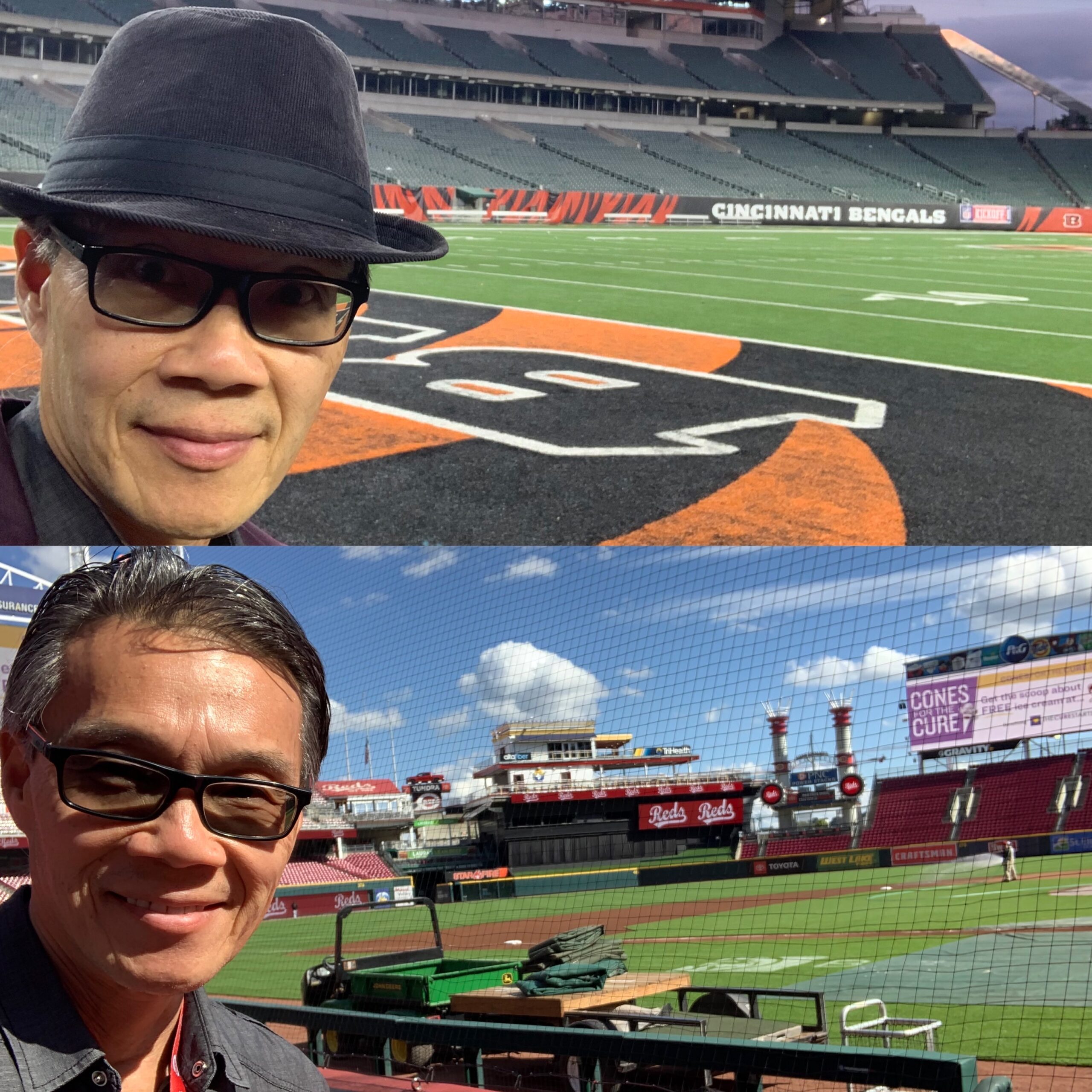 Is watching Cincinnati take on Pittsburgh in an NFL/MLB doubleheader on consecutive days awesome…or weird?

Wasting Away in Cincinnati

(CINCINNATI, Oh.) – You might say I’m a glutton for punishment. After watching the AFC Champion Cincinnati Bengals stumble out of the gate against their hated divisional rivals from Pittsburgh, I decided to stick around the Queen City for another day and watch the lowly Reds take on the even lowlier divisional rival Pirates. You might call it the Cincinnati versus Pittsburgh doubleheader from Hell. It’s a one-two punch for the desperate sports fanatic with way too much time on their hands.

The contrast between an NFL opening day spectacle (where Cincinnati is coming off their magical Super Bowl LVI appearance) and a regular weeknight MLB clash (where the perennial bottom feeding Reds are squaring off against their fellow cellar dwelling Pirates) couldn’t be greater.

On the football side, you’ve got 65,000 or more fans jacked, packed, and stacked three hours prior to kickoff—tailgating in the most ridiculous manner possible. They’re hunkered underneath overpasses, spilling over into concrete parking garages, and scrunched creatively into all these urban nooks and crannies.

Navigating through the morass to the stadium gates was no small feat. Parking alone can set you back fifty bucks. Engaging with all the drunks, panhandlers, and obnoxious terrible towel-waving Steeler fans further robs you of your dignity.

Once inside the sanctity of the Paycor Stadium press box, however, the NFL experience was definitely first class. As always, the hospitality, food, and locker-room access easily rated five stars in my book.

Unfortunately, the Bengals didn’t uphold their end of the bargain on the field, squandering away several opportunities to win after turning the ball over five times, missing a chip shot field goal, and getting a potential game-winning extra point attempt blocked in the process.

You had to feel bad for Bengals fans. They came into the season with such high expectations (rightly so), only to be punched in the mouth right out of the gate. I’m not sure if it was the alcohol speaking or what, but I heard several threats uttered by disgruntled patrons exiting the stadium that probably needed to be reported to the FBI. There’s nothing like passion for your NFL team, or outrage when they crash and burn.

On the baseball side the next evening, the mood and circumstances couldn’t have been more different. Even with the never-ending construction along the I-75/I-71 corridors, getting downtown was a virtual snap. You could park right next door to the stadium for a mere $12 a pop. Is there tailgating in baseball? I didn’t notice any drunken revelry on my casual stroll in.

Looking around the field-level seats on a leisurely Monday evening, I spotted a lot of young families with children, numerous couples on dates, and the usual mix of baseball die-hards donning Joey Votto jerseys. Conspicuously missing was the boisterous group of Pirate fans usually seated along the third-base line. It seems that even Yinzers have their limits.

When the game finally started, there were the obligatory loud cheers when Aristides Aquino blasted a two-run homer in the bottom of the fourth inning, but other than when the Reds closed out an inning, you could easily have mistaken the crowd noise for a casual summer night watching the fireflies on your back porch. The Bark in the Park promotion only added to the backyard-like ambience, especially when the number of furry four-legged friends easily outnumbered the hairy two-legged variety.

For the record, Cincinnati (56 – 83) lost to the Pirates 6 – 3, but the reality is that none of the 12,083 in attendance at Great American Ballpark really cared who won or lost. The Reds were mathematically eliminated from the National League Central race on Saturday. With their loss this evening, their elimination number for a wild-card spot is rapidly dwindling as well.

Remember, the Reds must win seven of their remaining 23 games to avoid the dreaded 100-loss season. After their disastrous franchise-worst 3 – 22 start, it’s miraculous they’re even poised to make that final run. It’s also ironic that despite the fact the team stinks to high heaven, there are still more fans in the stands by far than you’ll see at church on Sundays.

I guess the overarching lesson for me these past two days is that sports—for many—remains a welcome distraction. It doesn’t matter whether your team’s in the hunt or just playing out the string, it’s the experience of following them faithfully that counts. Unless your livelihood is based solely on winning or losing, consider it a blessing to be able to just regularly sit back, to cheer on the victories, and to lament the defeats. All the better if you can spend time doing it together with friends and loved ones.

In the end, there’s nothing at all wrong with passion for sports, as long as it’s not misdirected toward others or taken to extremes. In fact, passion for sports is totally awesome. I’m convinced it’s good for your psyche. It’s certainly not wasting your life away—even if you’ve spent that entire life as a loyal Cincinnati sports fan.