Skip to content
You are here
HOME PAGE / 01 FEATURED / College Football – ACC – No. 5/5 Clemson Pulls Away For 31-3 Win At Boston College 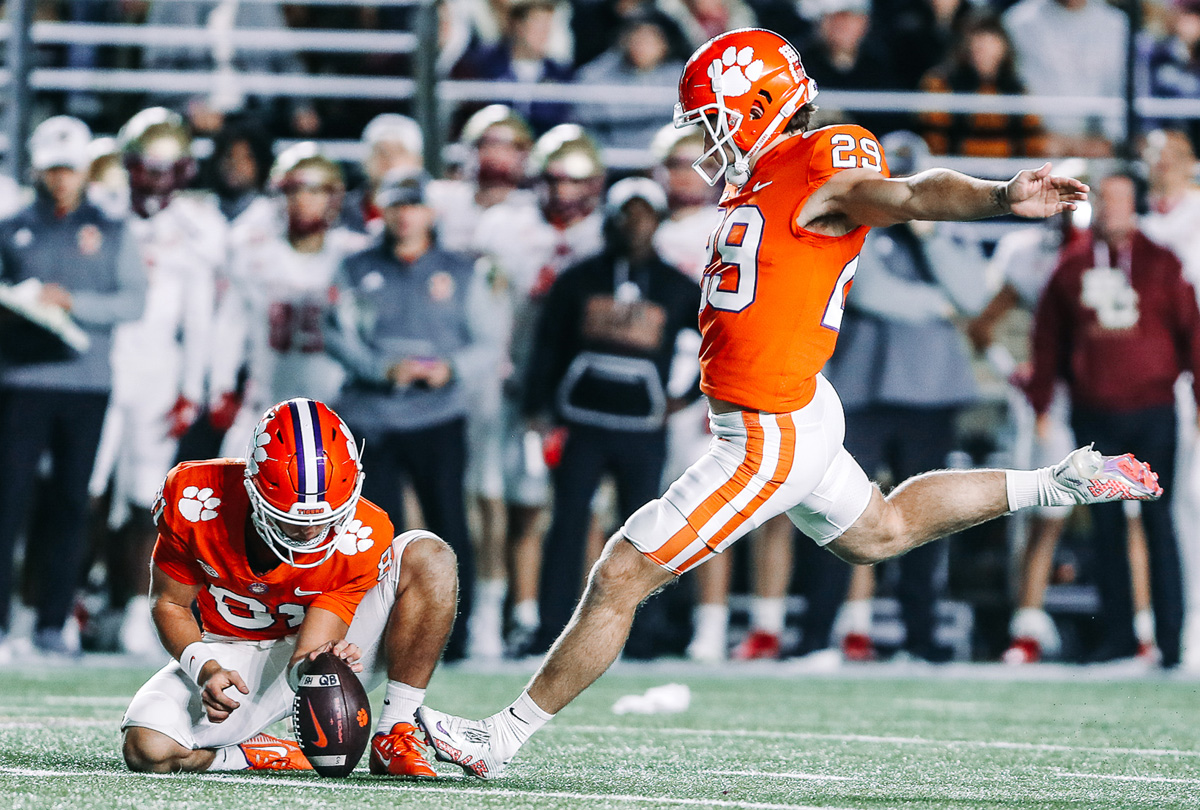 CHESTNUT HILL, Mass. – No. 5/5 Clemson used touchdowns on its final offensive play of the first half and first drive of the second half to pull away from Boston College, 31-3, on Saturday night at Alumni Stadium. The Tigers (6-0, 4-0 ACC) held the Eagles (2-4, 1-3 ACC) to 34 rushing yards, piled up 11 tackles for loss, four sacks, broke up eight passes, and registered 13 quarterback hurries in the victory.

Clemson has now won a nation-best 12 games in a row overall and 12 in a row in the series with the Eagles. After going into half with a 10-3 lead, the Tigers shut out the Eagles in the second half, allowing just 86 total yards (one rushing yard) after half.

The Boston College Gridiron Club, by vote of the ABC broadcast crew, presented the Leather Helmet Award to defensive end Xavier Thomas as the game’s most valuable player. Despite a limited snap count in reserve, Thomas recorded a career-high-tying 2.0 sacks in the victory.

Quarterback DJ Uiagalelei threw for 220 yards and three scores and led the Tigers in rushing for a second consecutive game with 69 yards on 12 carries. Uiagalelei hit three different receivers on the scores.

Clemson got on the scoreboard first with a field goal on the opening drive, as B.T. Potter hit a 35-yarder 3:32 into the contest, capping a nine-play drive that covered 54 yards. On the kick, Potter set the Clemson record for career field goal yardage.

The Eagles tied the game on the first play of the second quarter on a 30-yard field goal. It would represent their final score of the evening.

Late in the first half, the Tigers took advantage of great field position, as Antonio Williams took a punt 20 yards down to the Boston College 28-yard line. Running back Will Shipley found the end zone seven plays later, giving Clemson a 10-3 advantage with 45 seconds to play in the half. Clemson would carry that advantage into the break. Defensively, the Tigers were in the backfield often, racking up nine quarterback hurries and four tackles for loss in the first half.

Coming out of half, the Tigers came up with a quick stop and then Uiagalelei led the Tigers 73 yards on five plays, hitting Joseph Ngata in stride for a 38-yard score with 11:50 to play in the third quarter. Clemson added to its lead on the first play of the fourth quarter, as Uiagalelei found Beaux Collins alone in the end zone on 3rd-and-8 from the 10-yard line. It capped an eight-play, 73-yard drive, and the extra point extended Clemson’s lead to 24-3 with 14:57 to play.

Uiagalelei hit Brannon Spector for a 13-yard touchdown with 4:22 to play, his third touchdown pass of the day to his third different receiver. Uiagalelei had a key rush during the series, picking up 40 yards on 3rd and 3 to help set up the score.

Clemson will be on the road again next week when the Tigers face the Florida State Seminoles. Kickoff at Doak Campbell Stadium is scheduled for 7:30 p.m. on ABC.