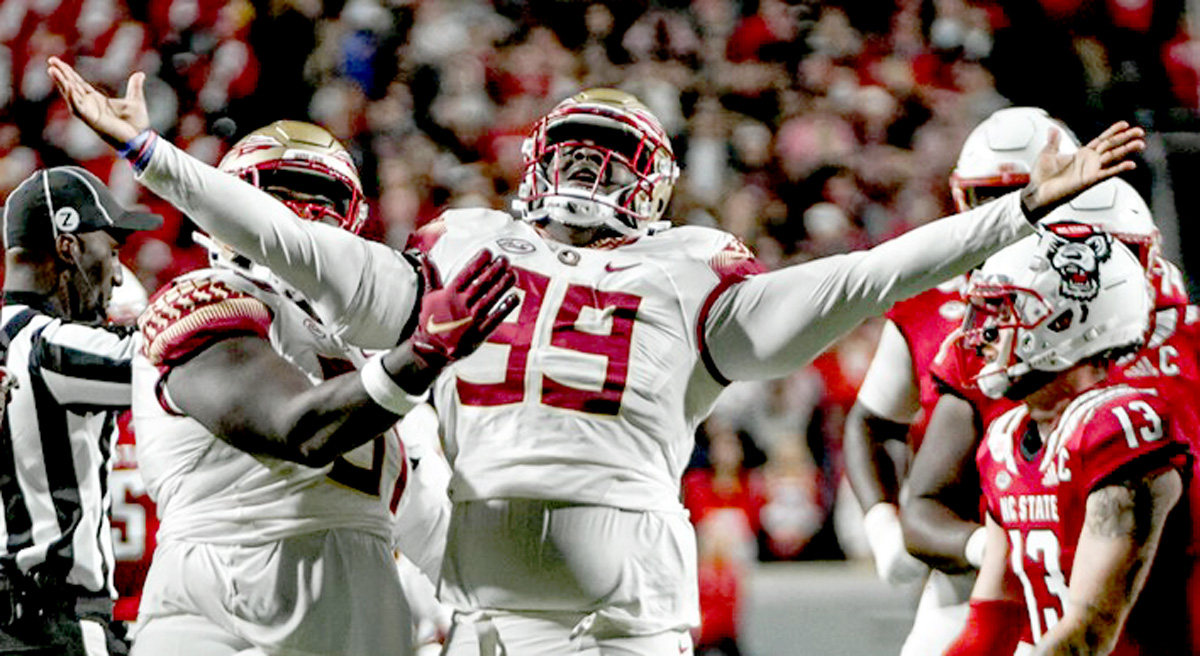 Raleigh N.C. 10-8-22 – NC State intercepted Jordan Travis’ pass in the end zone with 38 seconds left in the game to hold on for a 19-17 win over Florida State in Raleigh, N.C. Saturday night.

The Wolfpack (5-1) relied on four field goals from Chris Dunn and a stingy defense to win their 14th straight home game.

While FSU (4-2) scored all 17 of its points in the second quarter, the Seminoles mounted a game-closing drive moving the ball to the NCSU 22-yard line before the turnover.

Jordan Travis was 15-of-30 through the air for 181 yards and a touchdown with two interceptions.  He was also FSU’s leading rusher with 108 yards on seven carries.  Running back Treshaun Ward had 51-yards on just five carries before an injury ended his night early in the second quarter.

NC State quarterback Devin Leary completed 10-of-21 passes for a touchdown and threw one interception before leaving the game in the second half with an injury.  Jordan Houston led the Wolfpack ground game with 90 yards on 24 carries.

FSU gained 387 yards of total offense to the Wolfpacks’ 307 and the Noles’ defense limited NC State to 2-of-13 on third-down conversions.

NC State opened the scoring with 3:06 left in the first quarter on a 38-yard field goal by Dunn that capped a 7-play, 38-yard drive.

Florida State took the lead 7-3 with 11:29 remaining in the second quarter on a one-handed catch by Mycah Pittman on Jordan Travis’ 14-yard touchdown pass.  The scoring play was set up by a 71-yard run by Travis.

FSU stopped NC State’s best scoring threat of the second quarter when a 34-yard wheel route pass from Devin Leary to running back Jordan Houston put them at FSU’s 48.  The Seminoles’ stuffed the next two plays and safety Jammie Robinson picked off the third down pass attempt at the 28-yard line with under four minutes remaining in the half.

The defensive stand loomed even larger when Florida State drove 72-yards on just seven plays with the next possession to take a 14-3 lead on Lawrance Toafili’s 12-yard run with :48 left in the half.

After holding NC State to a three-and-out and with most of the stadium expecting little over the final :38 seconds of the half, Mycah Pittman appeared to camp under NC State’s punt.  But it turns out he was just drawing defenders to his side of the field while Ontaria Wilson collected the punt on the opposite side and raced 46-yards to set up FSU’s final score – a 47-yard Ryan Fitzgerald field goal to make it 17-3 at the half.

NC State took the opening possession of the second half 84-yards on 10-plays cutting FSU’s lead to 17-10 on a 10-yard pass from Devin Leary to Darryl Jones.

FSU’s defense stopped the Wolfpack in the red zone after a special team mistake set them up on the Seminoles 13-yard line.  Penalties and a dominating defensive front pushed the Wolfpack back to their 37-yard line, but Dunn nailed a career-long 53-yard field goal to make it 17-16 with 12:07 left.

Dunn gave the Wolfpack the lead for the first time since the first quarter with a 27-yard field goal with 6:33 left which proved to be the game winner.

Florida State will host Clemson this Saturday at 7:30 p.m. on ABC.