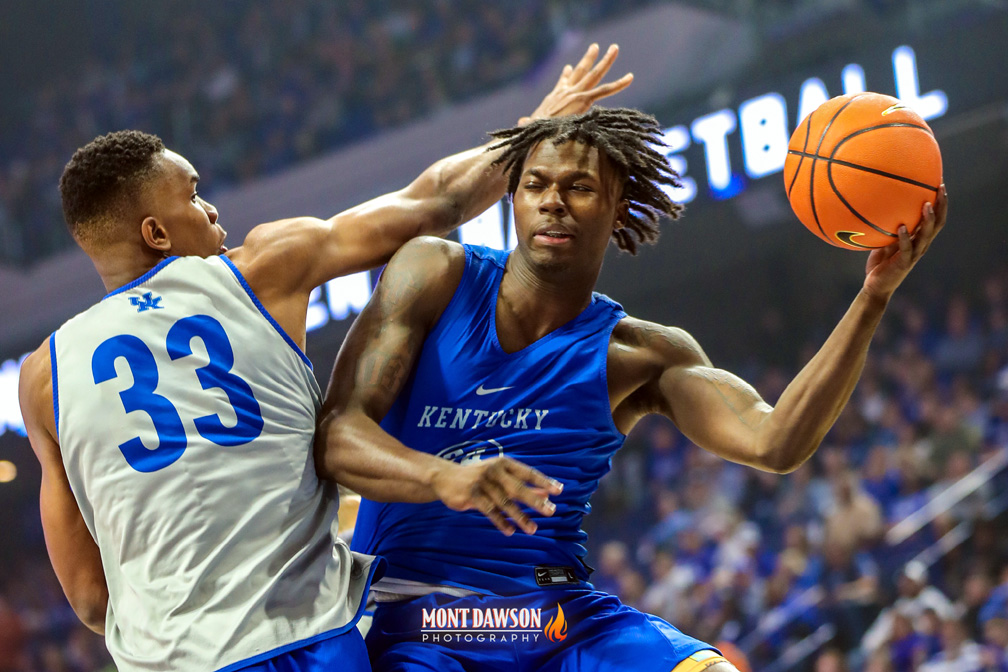 Big Blue Madness tipped off the 2022-23 Kentucky basketball season Friday night. With growing anticipation heading into basketball season in the bluegrass, Rupp Arena was buzzing with energy throughout the night. The night included welcoming back several former Cats to Rupp Arena, while also introducing the 2022-23 versions of the Men’s and Women’s teams.

Next up was the first competition of the night, in the form of a Blue-White Shootout. The team was split into a designation of “Blue” or “White.” Teams would shoot jump shots from about 18 ft. away from the basket from 5 different points below the 3-point arc. The goal was to be the first team to make 5 shots from each location. Team Blue won this event with LSU transfer Ajae Petty making the winning shot.

Finishing out the night for the Women’s team was the yearly short scrimmage to give the fans a quick glimpse of what the team will look like on the court together. This year the scrimmage was only 6 minutes with a running clock. The final of the scrimmage saw the White team beat the Blue team 12-10, with the leading scorers in the game being Jada Walker (4 points), Saniah Tyler (3 points), and Robyn Benton (3 points).

Fans next chance to catch the UK Women’s Basketball team is Saturday, October 22 at 11 a.m. ET as they host their Fan Day and annual Blue-White Scrimmage in Memorial Coliseum.

Between the Women’s and Men’s teams introductions and events, the 24-time national champion UK cheerleading team performed their routine for the Rupp Arena crowd. The UK Dance team followed the cheerleading team with a performance of their own.

The Men’s team portion of the night once again started with team introductions. Returning National Player of the Year Oscar Tshiebwe received the loudest ovation form the crowd as he crutched himself onto the stage after recently undergoing a minor knee procedure. The introductions portion also included former players in attendance including Brandon Knight, Tyler Ulis, Kevin Knox, Nick Richards, Hamidou Diallo, Bam Adebayo, and Michael Kidd-Gilchrist. In Coach Calipari’s tenure at Kentucky, he has been known to perform proud and fiery speeches at Big Blue Madness. However, Calipari was of few words in this years production, simply thanking the fans for coming, recognizing former players in attendance, and encouraging Big Blue Nation to support the team in the upcoming season.

Before the team began their competitions for the night, they had a 10-15 warm up period that saw new Strength and Conditioning Coach Brady Welsh lead them through a noticeably different active warmup than in previous seasons. Oscar Tshiebwe and Lance Ware were inactive for the night.

The first competition for the Men’s team was the 3-point contest. The contest was only one round and saw Illinois State transfer Antonio Reeves win with a score of 19 points. The rest of the participants and scoring breakdown was 2021-22 defending 3-point contest champion CJ Frederick (15 points), Chris Livingston (13 points), and Jacob Toppin (15 points).

Following the 3-point contest was the Dunk Contest. The honorary judges included 2019 NBA Dunk Contest Champion Hamidou Diallo, Kevin Knox, Nick Richards, Brandon Knight, and Tyler Ulis. The participants included Daimion Collins, Chris Livingston, Adou Thiero, Jacob Toppin and Kareem Watkins. Collins first dunk included jumping over teammates Kareem Watkins, Sahvir Wheeler, and Walker Horn while his second was a powerful one-handed slam. Both dunks earned him a combined score of 78. Livingston showed off his athleticism throwing down two powerful dunks that also earned a combined score of 78. Thiero made some athletic attempts and did throw down two dunks but did not qualify to win the contest. Toppin did not plan to take part in the contest but entered himself after the first three completed their dunks. Toppin failed his ultra-athletic dunk attempts for his first round but saw a reverse pump slam go through for his second dunk. Toppin’s second dunk received a score of 49, the highest overall score for a dunk in the contest. Kareem Watkins missed on all of his dunk attempts for both rounds. The winner of the dunk contest was determined to be Jacob Toppin after consulting with former NBA Dunk Contest Champion Hamidou Diallo and a vote via crowd noise.

To finish out the night the Men’s team played an 8-minute scrimmage. The scrimmage finished in a 23-23 tie with the leading scorers being Chris Livingston (10 points), Jacob Toppin (10 points) and Antonio Reeves (9 points).

The next chance to catch the UK Men’s Basketball team is Saturday, October 22 at 6 p.m. ET at Appalachian Wireless Arena in Pikeville, KY.