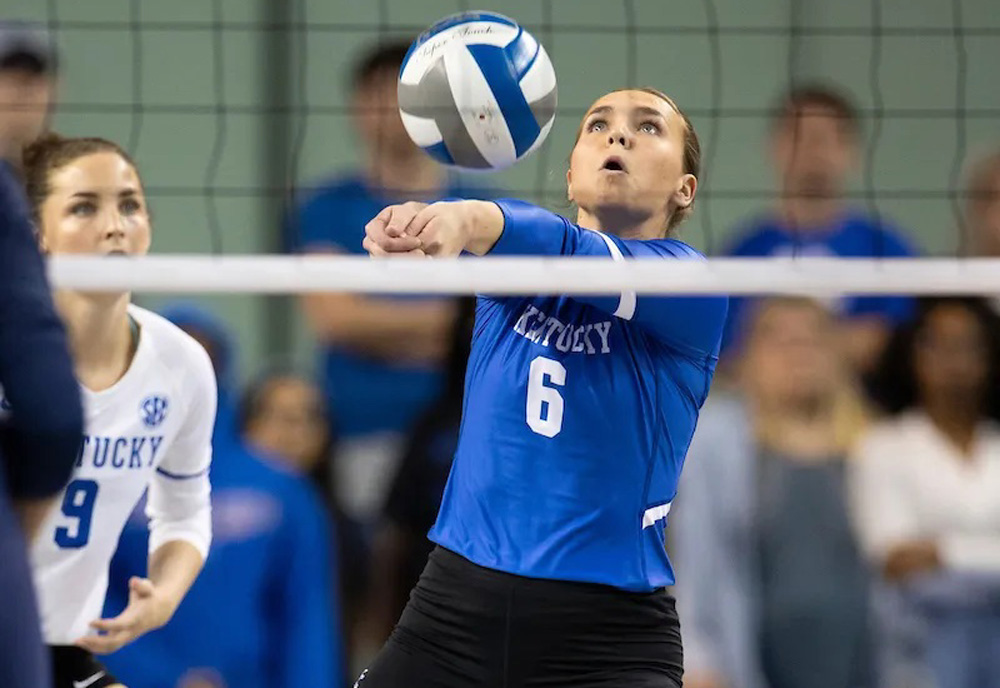 LEXINGTON, Ky. –Adanna Rollins and the No. 20 Kentucky Wildcats that put on a convincing 3-0 (25-21, 25-19, 25-16) sweep of the Auburn Tigers inside Memorial Coliseum on Saturday as the Wildcats held serve with a clinical performance in Lexington.

Kentucky never trailed in sets two and three, gliding to keeping its spot atop the conference with Florida, who also won Saturday to keep pace.

Emma Grome had 46 assists in the three-set win as she helped steer Kentucky to a .369 hitting percentage as she also had three aces and a pair of blocks in one of her best outings of the season to this point.

Rollins put on a show for the Memorial Coliseum crowd as she killed 17 balls on just 31 swings, leading UK with a .452 hitting percentage as the Wildcats with her assistance sided out at over 65 percent for the match to take home the victory.

The series concludes at 1 p.m. ET on Sunday live on SEC Network+ and the ESPN app.

Kentucky raced out to a 4-1 lead thanks to the strong serving of Audrey Whitworth who led off the match with an ace to set the tempo. After Auburn clawed back to even the set and even take the lead of the first time all day, UK won three points in a row to make it a 15-12 advantage at the opening media break after a Reagan Rutherford termination after an extended rally from the right pin. An Adanna Rollins ace, the third of the match for Kentucky, put the Wildcats ahead 18-13 and AU called its first timeout of the match trailing by five. An out-of-system back-row kill from Adanna Rollins pushed Kentucky to a 21-19 lead after a long rally and that pushed the Tigers into their final timeout of the set with UK notching a two-point advantage. Adanna Rollins hit .583 and had a terrific closing swing as Kentucky won the opening set, 25-21. Rollins had seven kills on just 12 swings as Kentucky hit .516 in the frame with no errors to take a 1-0 lead in the match.

It was a much more uneven start to the second set with the Wildcats jumping out to a swift 5-0 lead off the serving pressure of Audrey Whitworth. After the Wildcats made it 5-0, AU got a sideout to cut into the lead, but a huge block from Haley Melby and a swing from the right pin by Reagan Rutherford expanded the Kentucky lead to 12-6 as the Wildcats doubled up the Tigers. Auburn won four points in a row after the UK lead ballooned to six and Kentucky had to spend a timeout with its lead down to just two at 12-10. An ace by Rollins increased Kentucky’s lead to 20-14 as the Wildcats put the punctuation on a 3-0 run and Auburn burned its final timeout, trailing by six. An Azhani Tealer kill from the right pin closed the set and Kentucky took control of the 2-0 lead at 25-19.

The third set started with another consecutive run of Kentucky points as the Wildcats won the opening three points of the frame to jump out to the early lead. Auburn had to call its first timeout of the set trailing by five points at 11-6 following an ace from Emma Grome as the sophomore continued to have terrific service pressure. Kentucky grew its lead to 15-8 and the Tigers called their final timeout of the frame.