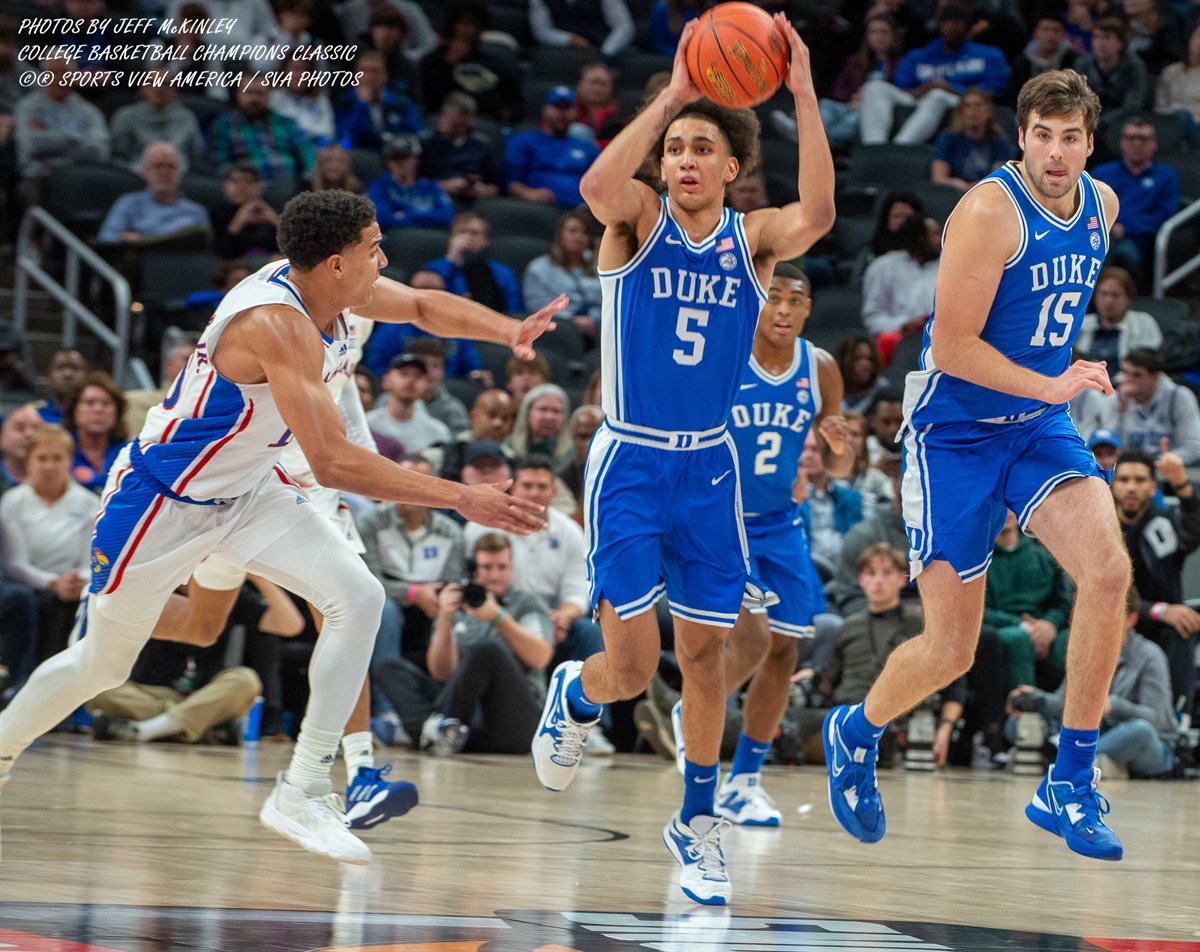 The Kansas Jayhawks and Duke Blue Devils squared off in the second game of the Champions Classic late Tuesday night. The game tipped approximately 40 minutes following the Kentucky-Michigan State matchup that saw the Spartan’s take the win in a double overtime thriller. The reigning National Champions came into the game ranked No.6, while Duke entered just behind at No. 7. Duke has the best record in the Champions Classic of any of the four teams in the event, with an all-time record of 7-4. Kansas has the second-best record in the event at 6-5. The Jayhawks were without head coach Bill Self for the game, as he was suspended for the first four games to start the season due to NCAA infractions. Duke is also sporting a new head coach on the sidelines this year for the first time in 42 seasons, in Coach K successor Jon Scheyer. Kansas returns some championship experience in the form of Harris, Wilson, Adams, Pettiford, and Yesufu. They also add in a big transfer in McCullar and a talented Freshman in Dick. Duke returns just two players form last season’s team in Roach and Blakes but feature a couple transfers and a quartette of talented Freshman in Filipowski, Mitchell, Lively, and Proctor.

The scoring started with a driving layup by Roach for Duke. Kansas’s first points came via a McCullar three-point make. The Jayhawks went on a quick 7-0 run to grow their early lead to 12-6 at the first media timeout. An acrobatic and-one layup by Dick extended the lead to 8, with Kansas then taking a 17-8 lead into the under 12-minute media timeout. Duke went cold from the field midway through the half, hitting just 2 of 11 field goals. Kansas did not take full advantage of the lack of offense from the Blue Devils though, as they led 23-15 with 7:53 to play in the half. McCullar led the Jayhawks offense early with 8 points. Back-to-back athletic blocks by Kansas kept the lead at 27-20 with 5-minute to play. A short scoring drought by Kansas coupled with a 5-0 Duke run shrunk the lead to 27-25. At halftime the score was 33-29 Kansas. Duke shot just 31% from the field in the half (9% from 3!), while Kansas shot 45% from the field and just 15% from three-point range. The Blue Devil’s outrebounded the Jayhawks 22-18. Wilson led the scoring for Kansas with 10 points in the half, while Roach had 11 points for Duke.

The second half scoring started with a Proctor jumper for Duke. Wilson responded with a layup for Kansas on the next trip down the court. A follow-up slam by Lively on a missed layup gave the Blue Devils the lead at 38-37. Some efficient offense displayed by both teams led to a scoring outburst early in the second half. The score at the first media timeout was 43-41 Duke. A 6-0 Duke run extends the lead to 47-41, with the Kansas scoring drought ending with a Wilson layup. Mitchell showed off his athleticism for Duke with consecutive powerful slams down the lane. Duke had a 51-47 lead with 11:09 to play. A driving and-one layup by Wilson ignited the Kansas crowd and gave the Jayhawks a 54-53 lead with 9-minutes left in the game. A 5-minute Kansas scoring drought saw Duke retake the lead with a score of 59-54 at the 4:27 mark in the second half. A quick 4-0 run by the Jayhawks brought the lead within 1, 59-58 with 2:37 left. A deep three by Dick pushed Kansas ahead 61-59, but Duke quickly responded with a three-pointer of their own from Roach to retake the lead, 62-61. For Kansas, Freshman Gradey Dick scored 7 points in a row to allow Kansas to retake the lead 65-62 with 48 seconds to play. An and-one for Adams extended the lead to 67-62. Kansas went on to hit their free-throws late in the game and won by a score of 69-64 to move to 3-0 on the young season. Duke fell to 2-1.

Duke shot 36% from the field (14% from 3) and Kansas shot 46% from the court (16% from 3). Both teams made just 3 three-pointers in the game. Wilson led the charge for the Jayhawks with 25 points. Freshman Filipowski scored 17 to lead the Blue Devils. Wilson and Filipowski also led the way for their teams in rebounds, with 11 for Wilson and 14 for Filipowski. Veteran PG Harris had 10 assists for Kansas, while Proctor collected 3 assist to lead Duke. The plus/minus leader in the game was Kansas’s McCullar with a +8.

Both teams return home for their next games this Friday, November 18 as Duke takes on Delaware and Kansas takes on Southern Utah. Both games will be televised on ESPN+.