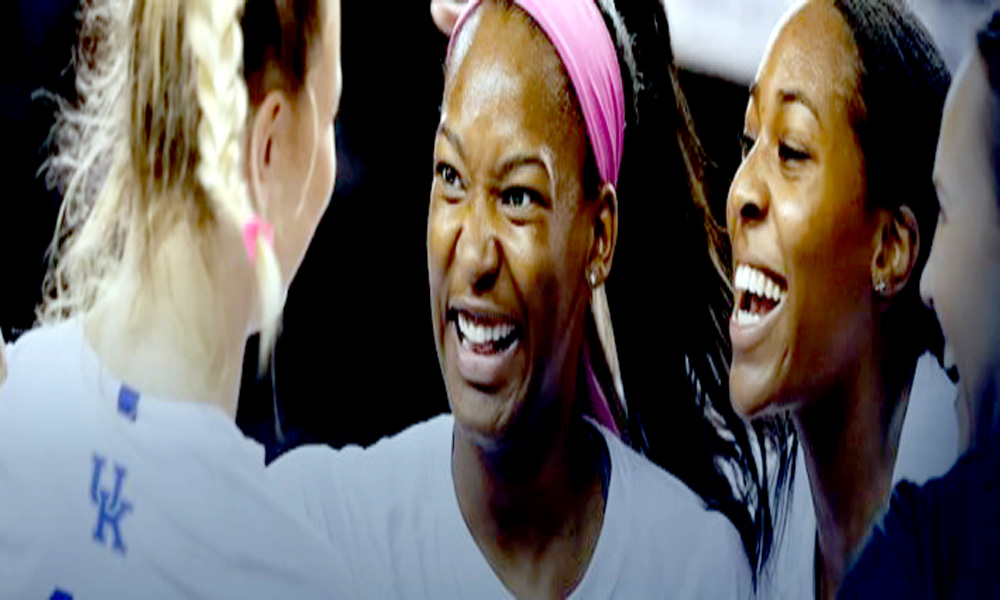 GAINESVILLE, Fla. – Azhani Tealer had 11 kills, hit .333 and stuffed seven blocks on Sunday afternoon as the Kentucky Volleyball team pulled back even atop the Southeastern Conference standings with Florida thanks to a 3-0 (25-21, 26-24, 25-17) sweep of the Gators in Exactech Arena.

With Saturday and Sunday’s series split with Florida, the Gators and Wildcats will enter the final weekend of the 2022 Southeastern Conference season tied with a 13-3 record in league play. Florida plays at Ole Miss and Kentucky hosts a series with South Carolina. The SEC does not break ties for a volleyball championship, so if both teams end with the same record, the league will declare the teams co-champions.

The UK/USC series begins on Friday at 4 p.m. ET inside Memorial Coliseum, with that match also marking Senior Day. Tickets are available at UKathletics.com/tickets.

Adanna Rollins and Erin Lamb both joined Tealer with 11 kills in the match to all co-lead the Wildcats in offense, as Kentucky hit .267 for the match with three players in double-figures scoring. Emma Grome dished out 36 assists and UK had three assists from Eleanor Beavin, as well with two from Riah Walker.

Defensively, it was Eleanor Beavin who led the way with 13 digs and that effort helped lead UK to holding UF with a .163 hitting percentage in the match as only one Gator reached double-figure scoring.

Kentucky started brightly in the opening set with a lead that was as big as three at 12-9 about halfway through the proceedings. The Gators came back to tie the frame at 14 all on an ace from Marina Markova, but a service error on the next point gave Kentucky the 15-14 lead going into the media timeout. After the two teams shared ties and one-point leads for the midsection of the stanza, a block from Adanna Rollins and Azhani Tealer gave Kentucky a two-point cushion at 19-17 and Florida was forced to call its first timeout of the match with UK leading by a pair. The lead ballooned to 21-18 thanks to another block from Tealer on the right side as Kentucky reinstated its three-point lead, the largest since it was 12-9 earlier in the set. An Adanna Rollins kill, her fourth of the set, gave Kentucky a 23-20 lead off an extended rally and Florida was pushed into calling its final timeout. UK called its final timeout at 24-23 and an Erin Lamb termination from the right pin ended the set with Kentucky taking it, 25-23.

Set two started well for the Wildcats, as well with a 3-1 lead out of the gates that grew to a 7-4 lead off a solo stuff from Adanna Rollins on the left side that made things 7-4, UK. The next point was an overpass that Rollins threw to the floor for her team-leading seventh kill of the match as Kentucky took an 8-4 lead, the largest lead for either team in the match to that point and the Gators called their first timeout to talk things over. Kentucky’s lead grew to five at 12-7, but Florida went on a 9-4 run that squared the set at 16 all and UK burned its first timeout looking to stop the Gators momentum. Azhani Tealer stuffed her fourth ball of the set to give Kentucky a 21-20 lead after both teams tied from 18-all all the way through 21 and that prompted a timeout called by Mary Wise and the Florida Gators. A Bella Bell block gave Kentucky a 25-24 lead after it salvaged a set point for UF and a kill out-of-system for Adanna Rollins on the right side handed UK the 2-0 lead and a 26-24 second-set win.

Thanks to the serving of Azhani Tealer in the early part of the set, Kentucky took a 6-3 lead and that led to an exchange of six-consecutive side outs from both teams that made things 13-10 as the teams were even. UF pulled to within a point at 13-12, but a kill from Rollins and a block from Bella Bell in the middle made the three-point lead alive for UK into the media timeout at 15-12. The Wildcats went on a 7-1 run from that point and Florida had to use a timeout after a backrow attack was called and Kentucky was four points from the match at 21-15. Kentucky dominated down the stretch and won the third set, hitting .226 in the frame and holding UF to .000 as the Wildcats secured a 25-17 third-set win.