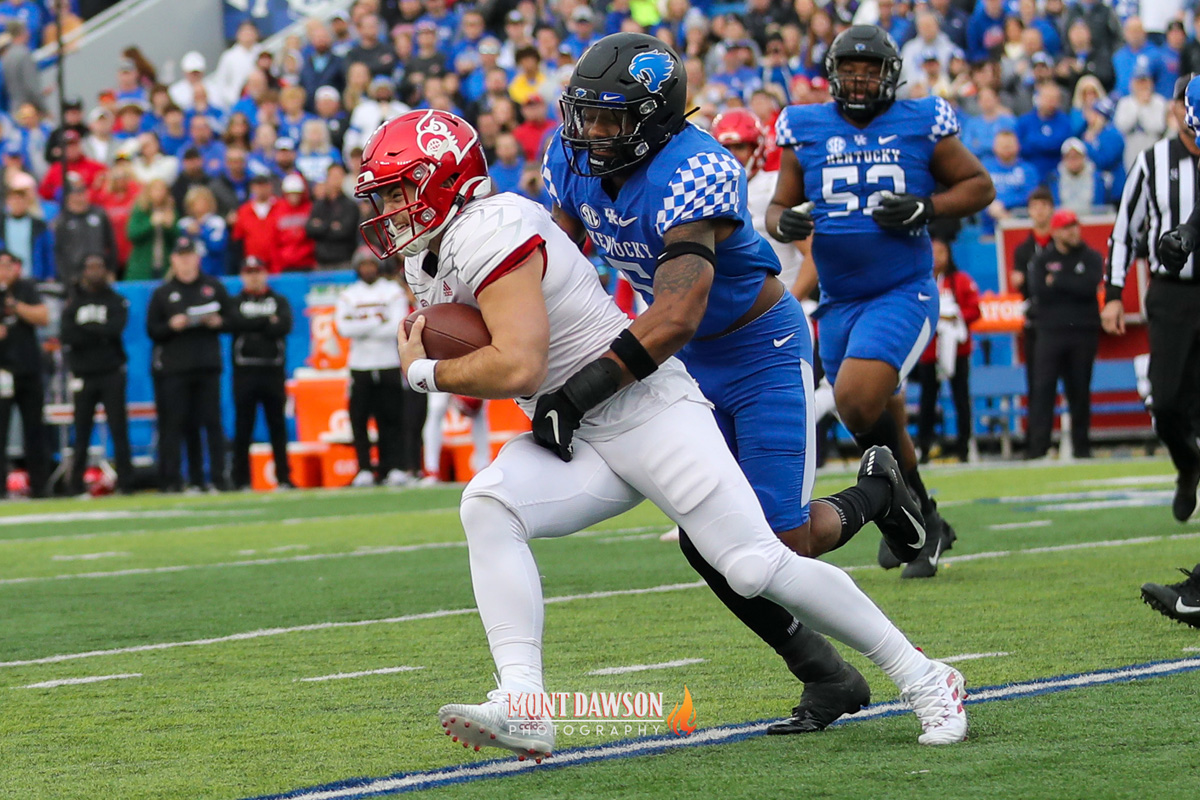 For Kentucky, the annual Governors Cup game against Louisville was more than a chance to beat the in-state rival for the fourth time in a row. It was Kentucky’s opportunity to save a season, that earlier in the year, appeared to be a historically great one. It was also an opportunity to send the Wildcat Seniors off with one last win at Kroger Field.

Thanks to Matt Ruffolo’s perfect kicking, Kentucky kept the Governor’s Cup in Lexington by defeating Louisville 26 to 13. Special teams had struggled the entire season, but played a perfect game to end the season. The four field goals by Ruffolo marked his career high.

Will Levis gained 125 yards passing in the first quarter, but slowed down the rest of the game ending with 188 yards on 11 of 19 passing for 2 touchdowns. Chris Rodriguez had 120 rushing yards and broke the Kentucky record with 20 games with over 100 rushing yards.

The Defense played well once again. They forced three turnovers (2 interceptions, 1 fumble) and gave the offense a short field all night.  J.J. Weaver led the defense with 7 total tackles, a forced fumble, and a quarterback sack. Louisville’s only scored 13 points which is the lowest number of points since their season opener against Syracuse when they scored 7.

Kentucky ends the season with 7 wins and 5 losses. Now the waiting and guessing will begin to find out which bowl the Wildcats will play in. The season expectations were not fulfilled and some would call the season a failure. However, beating your biggest rival to end the season makes the disappointments a little less bad.

Louisville won the coin toss and deferred to the second half. Kentucky’s first possession ended after only 3 snaps before the punted it to Louisville. The Cardinals gained only one first down before punting the ball back to the Cats. A 70-yard pass reception by Josh Kattus set the Wildcats up in the redzone. Dane Key catches an 8-yard pass for a touchdown. (Kentucky 7 Louisville 0). The Cardinals got into the redzone, but a defensive stand took the ball away from the Cards on a 4th and half yard.

Louisville received the football to start the half, but was forced to punt after a 3 and out. Kentucky drove the field, but once again came up short of a touchdown and settled for a 35-yard field goal. (Kentucky 16 Louisville 7) On the second play of the Cardinals following drive Malik Cunningham throws an interception to Kentucky’s Trevin Wallace. Kentucky made the best of the short field and scored a touchdown on a 3-yard pass to Barion Brown. (Kentucky 23 Louisville 7)