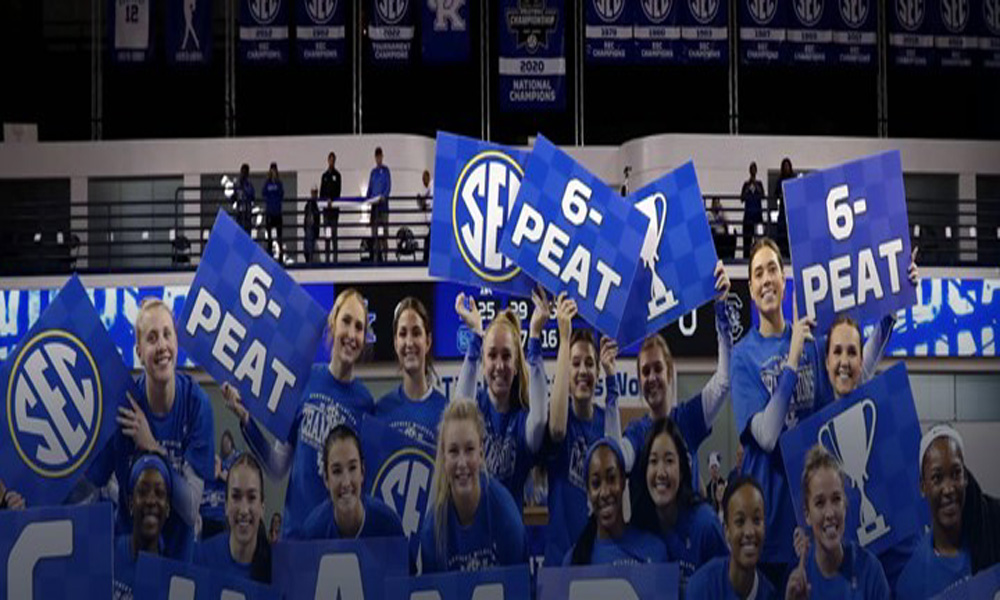 Senior Azhani Tealer once again led the way for the Wildcats, as she hammered home 16 kills on a .520 hitting percentage. She also contributed two blocks. Two other Wildcats also had double-digit kills, as Adanna Rollins and Reagan Rutherford each had 11 terminations. Rollins padded the stat sheet with eight digs, six blocks, and an ace. Rutherford also added four digs and a block.

As a team, Kentucky’s offense fired on all cylinders Saturday afternoon. Emma Grome dished out 44 assists and ran the offense to the tune of a .366 hitting percentage. The Wildcats registered 50 kills in just three sets, marking just the fourth time the Wildcats eclipsed the half-century mark in a sweep this season. In addition to the double-digit trio of Tealer, Rollins, and Rutherford, Erin Lamb contributed six kills, while Elise Goetzinger and Bella Bell had four and two, respectively.

The Wildcat defense was paced by Eleanor Beavin who added 16 digs to her stat column. As a team, Kentucky racked up 42 digs, nine blocks, seven aces, and held the Gamecocks to a .184 hitting percentage for the match.

While Kentucky now has already clinched a share of the regular-season title, a Florida loss at Ole Miss later Saturday evening would mean the Wildcats would clinch the championship outright. If Florida wins in Oxford tonight, the SEC will declare the Wildcats and the Gators co-champions. Because the two teams split their head-to-head meeting in Gainesville, the league would use the secondary tiebreaker of head-to-head points scored to award the automatic qualifier for the NCAA Tournament. The Gators hold that advantage 139-136.

Kentucky now improves to 20-7 on the year, including a 15-3 record in Southeastern Conference play. The 2022 season marks the 12th-straight season of 20 wins or more for the program and the 15th such season in the 18-year tenure of head coach Craig Skinner.

The Wildcats now await the decision of the NCAA selection committee before knowing their next match. Selections, including host sites, seeded teams and first-round matchups will be announced during the 2022 NCAA Volleyball Selection Special, which will air on Sunday, November 27th at 7:30 pm ET. It will be televised on ESPN2 and streamed live on the ESPN app.

SEC awards including All-SEC, All-Freshman, player of the year, coach of the year and libero of the year will be announced Sunday afternoon by the league office.

After South Carolina took an early 4-1 lead, back-to-back kills by Adanna Rollins and Reagan Rutherford were followed up by an Emma Grome ace to knot the game at four. South Carolina was able to build a lead as large as four points, but the Wildcats would continue to claw back into the set, eventually tying the match at 13 on a Gamecock attack error. On the next play, a successful challenge from Coach Skinner reversed an Azhani Tealer attack error into a kill, giving the Wildcats their first lead of the set since 5-4. At the media timeout, Kentucky led 15-14. Kentucky opened up its first multi-point lead, at 17-15, of the opening stanza following a stuff block from Adanna Rollins and Bella Bell. Following a termination from Bell, South Carolina called its first timeout of the set, trailing 18-16. Out of the timeout, Kentucky kept the run going, as a block from Rutherford and Bell was followed up by a service ace from Rollins. This 4-0 scoring run forces the Gamecocks to burn their final timeout of the set, trailing 21-16. Late in the set, a 4-1 burst from Carolina led to a Kentucky timeout, as the Wildcats were nursing a slim 22-20 lead. After the Gamecocks cut the Kentucky advantage to one, back-to back kills by Rutherford and Lamb, in conjunction with a Carolina attack error, gave the first set to Kentucky, 25-21. Three different Wildcats had at least three kills in the first frame, with Reagan Rutherford leading the way with five.

After an extended rally, a kill from Azhani Tealer opened up the scoring in the second stanza. After both teams traded side-outs, South Carolina was able to open up an early lead at 11-7, forcing a Kentucky timeout. The Wildcats were able to find some momentum midway through the set as four straight kills, two from Rollins and two from Tealer, tied the match at 15 and forced Carolina coach Tom Mendoza to use his first timeout of the set two. Immediately following the timeout, Adanna Rollins slammed home an overpass to give the Wildcats their first lead of the frame since 1-0. Back-to-back block assists from Elise Goetzinger, one in combination with Adanna Rollins and one with Emma Grome, stretched the Kentucky lead to 20-17 and compelled the Gamecocks into their final timeout. An ace from Emma Grome at 23-18 gave Kentucky its largest lead of the frame. Craig Skinner used his last stoppage of the set as three straight Gamecock points cut the score to 23-21. After a South Carolina service error gave Kentucky set point, the Gamecocks were able to put together a 4-0 run to gain a set point of their own, but a kill from Erin Lamb knotted the set at 25. After the two sides traded points, an Azhani Tealer hammer gave Kentucky another set point. The frame was finally finished as Lamb and Tealer combined for a stuff block, gifting the set to the Wildcats, 29-27, and sending Memorial Coliseum into a ruckus. Azhani Tealer led the way for the Wildcats in set two with nine terminations. Kentucky hit 22 kills in the second frame on .459 hitting; the 22 kills was a season high for kills in a set.

The Wildcats got off to another strong start as a solo block from Adanna Rollins and back-to-back service aces from Audrey Whitworth gave Kentucky the opening three points of the third set. A pancake dig from Eleanor Beavin, followed by a bump set from Elise Goetzinger, led to an extraordinary Erin Lamb kill that gave the Wildcats a 7-5 lead. The two teams traded points for most of the early part of the set, but a Gamecock attack error sending the set to its media timeout, with Kentucky leading 15-12. Out of the timeout, Kentucky began to pull away, as serves from Eleanor Beavin caused an ace, as well as an easy overpass slam for Azhani Tealer, pushing the score to 17-12. Kentucky kept inching closer to the finish line, as an Adanna Rollins kill ballooned the Wildcat advantage to 22-15. After a Gamecock timeout, a Goetzinger kill and a Carolina attack error set up match point. Elise Goetzinger closed out the match with another kill, bringing the final set three score to 25-16.