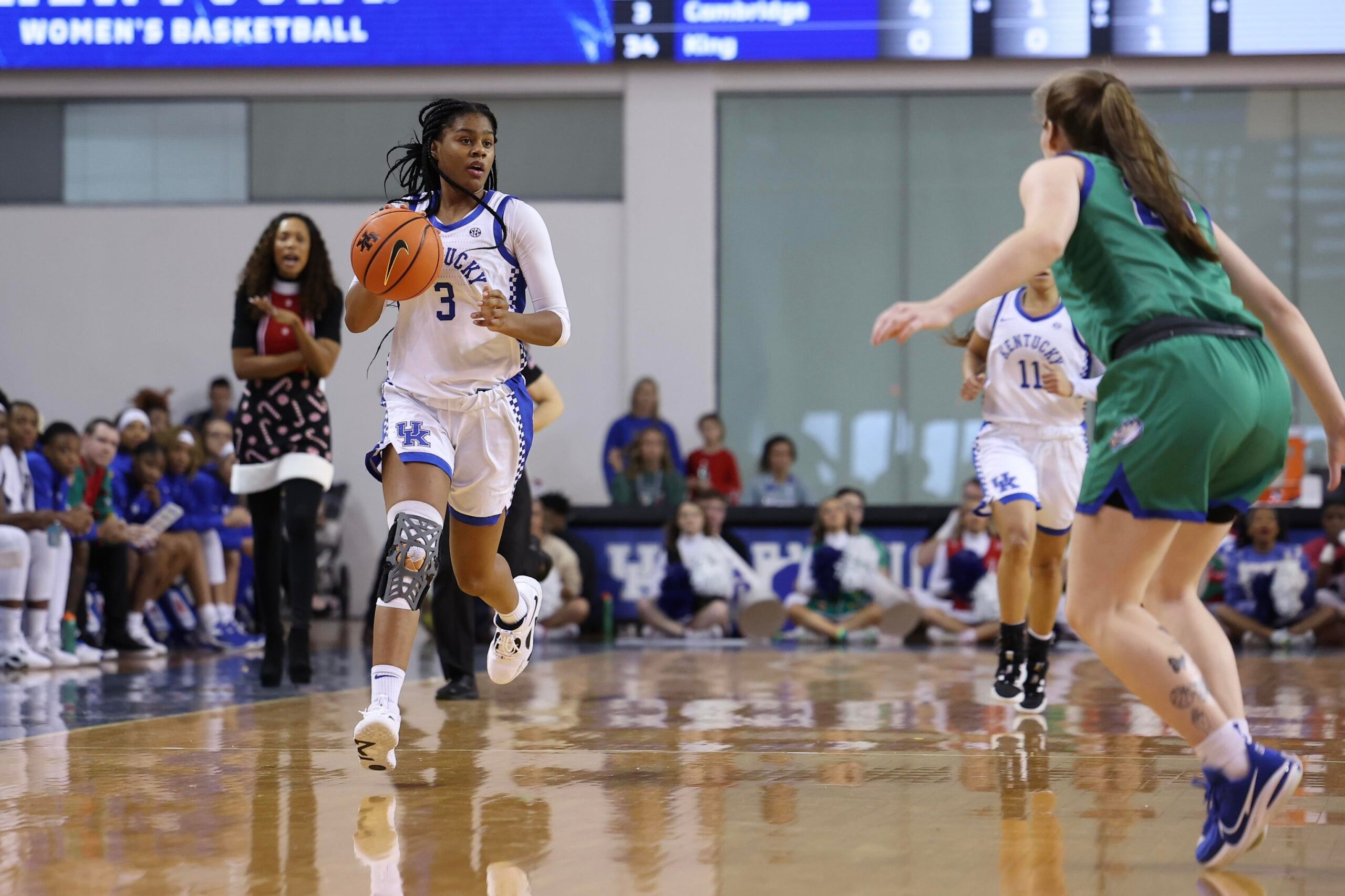 Kentucky fans who were looking for a ‘Cats win this weekend on the hardwood were left with a lot to be desired (UK Men’s loss to UCLA Saturday, UK Women’s 0-2 this weekend). Sunday afternoon was Holiday sweater day for the Kentucky coaches, staff, and fans in attendance, but the ‘Cats were not in the Christmas spirit just yet. With Christmas fast approaching, giving and gifting is in the air in the Bluegrass. However, the only giving the ‘Cats did on Sunday was through 20 gifted turnovers on the offensive end, continuing their season trend. When the final buzzer sounded at Memorial, the Kentucky WBB team had fell to the FGCU Eagles 69-63 for their third consecutive loss (7-4 on the season). This loss comes shortly after the ‘Cats lost to Murray State on Friday night by a score of 51-44 for the Racers first win over Kentucky in program history. FGCU entered the game with an 8-2 record on the season including losses to then No. 2 Stanford (93-69) and Duke (71-48). Some keys to the game for the ‘Cats were rebonding advantage, limiting their turnovers (averaging 16.8 per game), three-point shooting, and developing a consistent post presence.

The starting lineup for the ‘Cats included Benton, Walker, Scherr, Green, and Leveretter.

The game started with an FGCU steal off the tip-off that was won by the ‘Cats, the Eagles then used good ball movement to score the first basket of the game via an easy cutting layup. A lazy pass by Benton to Leveretter was stolen by the Eagles and led to a transition layup to give FGCU a 6-0 lead a little over 1-minute into the game. After an 8-0 Eagles run to start the game, the first points scored by Kentucky’s offense was through a Green driving layup off an offensive rebound by Leveretter. The ‘Cats continued to struggle to protect the ball to open the game, committing 6 turnovers in the first 5-minutes of game action. A corner three by the Eagles pushed their early lead to 9 with a score of 13-4. A shifty move by Scherr to shake her defender have her an open mid-range jumper that fell. Two Walker free-throws narrowed the FGCU lead to 13-8 with 3:22 left to play in the quarter. A steal and transition score by Cambridge gave the ‘Cats a 6-0 run of their own to shrink FGCU’s lead to 3. An Eagles three from the corner ended their 3-minute scoring drought and ended the first quarter with a score of 18-12 FGCU. The ’Cats committed 8 first quarter turnovers.

The second quarter scoring started with a mid-range jumper by Benton to bring the score to 18-14. A couple of Eagles three-pointers followed by a pair of Kentucky scores by Adeyeye and Benton brought the score to 26-22 after a trio of Benton free-throws. A FGCU layup quickly followed by a transition three re-extended their lead to 9 with a score of 31-22. The ‘Cats defense held strong the last 3-minutes of the half, holding FGCU to 0 field goals. The score at the half was 37-31 FGCU. The second quarter saw Benton and Walker combine to score 15 of 19 second quarter points. In the fist half the ‘Cats shot 43% from the field and did not make a three-pointer (0-6). FGCU scored 19 points off 13 Kentucky turnovers in the half and made 6 three-pointers in rout to their 6-point halftime lead. Walker led the way for the ‘Cats in first half scoring with 10 points.

The second half scoring began with a pair of Benton free-throws to bring the FGCU lead down to 37-33. A Green three-pointer from the top of the key left the ‘Cats down 3, 39-36. A forced turnover by the ‘Cats led to a transition opportunity for Scherr where she found Green for an easy layup to get the ‘Cats within 1. The ‘Cats took the lead off a mid-range jumper from Green, 40-39 Kentucky. The Eagles quickly re-took the lead as they led 44-42 at the media timeout. The ‘Cats re-tied the game at 44 with a pair of Scherr free-throws. A 7-0 FGCU run coupled with over a 3-minute ‘Cats scoring drought pushed the Eagles lead back to 7 with a score of 51-44. A couple ‘Cat free-throws and a Benton three at the third quarter buzzer left the score at 51-49 FGCU at the end of the third.

The ’Cats started cold offensively to start the fourth quarter, with their first points finally coming via an offensive rebound putback by Leveretter to bring the score to 53-51. After two Benton free-throws tied the game, the Eagles responded with an and-one on the other end to push the lead back to 3, 56-53 FGCU. Another and-one opportunity off a Kentucky turnover gave the Eagles a 61-55 lead with 3:20 left to play in the game. A Leveretter layup followed by a Scherr steal gave the ‘Cats an extra possession with the score sitting at 62-57 with 1:14 to play. Two Benton free-throws drew the ‘Cats within a possession by a score of 62-59. A trio of free-throws by the Eagles pushed the lead back to 6, 65-59 with 17-seconds to play. The Eagles continued to hit their free-throws down the stretch on their way to a 69-63 upset over the ‘Cats, handing Kentucky their third straight loss (all at home).

FGCU finished the game shooting 42% from the field (32% from three-point range with 8 made threes). The ‘Cats poor shooting continued Sunday afternoon as they shot just 32% from the field and 14% from beyond the arc. The ‘Cats dominated the boards 38-29 (13 offensive) and turned those extra possessions into 14 second chance points. The ‘Cats continued to turn the ball over with regularity in the game, committing 20 turnovers. Benton led the ‘Cats in scoring with 18 points while Walker finished with 14 points. Scherr led the rebounding effort for the ‘Cats with 9 boards. The ‘Cats finished the game with just 7 team assists (Scherr and Walker with 2 apiece). Adeyeye finished the game as the plus/minus leader for Kentucky, posting a +3 in 11-minutes of action. Petty, the ‘Cats best post player and leading rebounder on the season (6.2 RPG) played just 2-minutes Sunday afternoon. The ‘Cats struggled in organization on both ends of the floor throughout the game and led for a total of just 50-seconds in the game.

Coach Elzy and the ‘Cats will look to get back on track in their next game against the Ohio Bobcats on Wednesday, December 21 at 11:00 a.m. at Memorial Coliseum. The game will be available on SEC+.