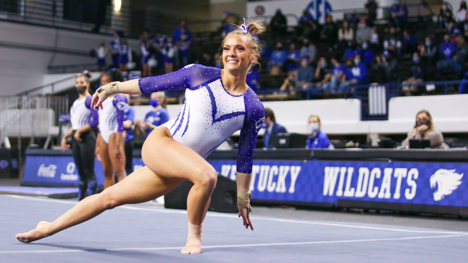 Josie Angeny highlighted the night with the outright all-around title in addition to two shared event crowns, including one with junior classmate Cally Nixon.

In total, the Wildcats matched or surpassed 13 individual season highs—five of which were good for career-high scores by non-freshmen.

Despite exceeding the 49-point threshold on each event as a team for only the second time and matching or bettering season highs on three events, Kentucky needed a come-from-behind effort to capture Friday’s contest. A strong performance on uneven parallel bars gave Arkansas a 49.375-49.250 lead after the opening rotation.

The Razorbacks’ 98.650-98.525 running lead continued after the second go-round, though Angeny tied Arkansas’ Kennedy Hambrick and Maggie O’Hara for the premier bars score of the night with a career-high-tying 9.900. Kentucky managed 49.275 as a team.

Arkansas’ lead grew to 147.925-147.775 after the third rotation, but the Wildcats held steady by way of what proved to be by far their best balance beam score of the season at 49.250. The Cats were ultimately responsible for each of the event’s top five individual performers, led by a 9.875 apiece from Angeny and Nixon, resetting a career high for the latter.

It was during the meet’s final stretch that Kentucky’s fortune was set in stone, as what has traditionally been the team’s most successful event was juxtaposed by a struggle for Arkansas on its fourth rotation. Kentucky totaled 49.225 on floor exercise, while the Razorbacks fell below the 49-point threshold at 48.750 on beam.

Angeny’s second career all-around win was propelled by a career-high 39.500.

Kentucky will look to carry the momentum of its first victory over a top-five opponent into its toughest road test to date, taking on No. 1 Florida (5-0, 4-0 SEC) on SEC Network next Friday at 7 p.m. ET.