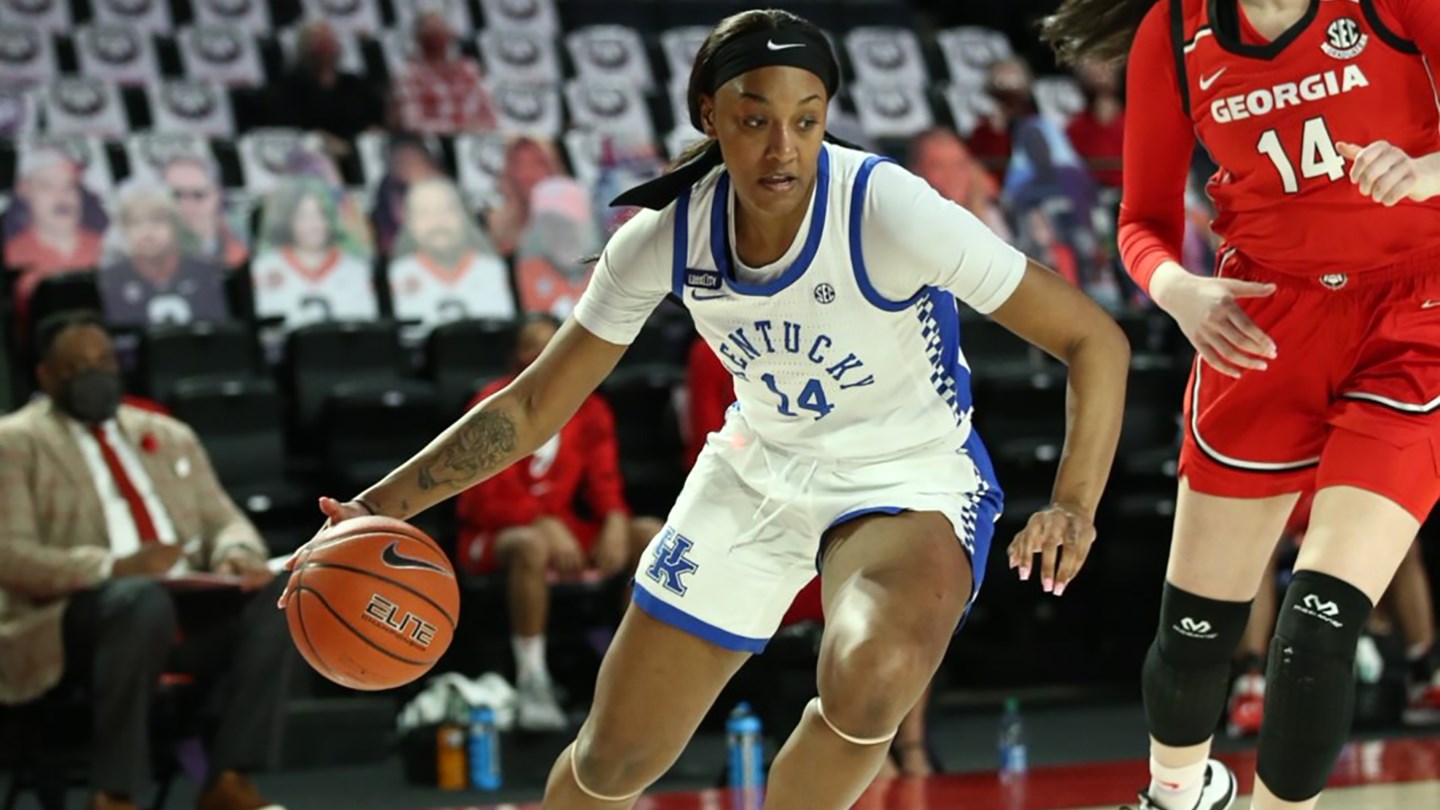 Kentucky (16-6, 9-5 SEC) got 15 points from Chasity Patterson, while Tatyana Wyatt had 11 points and grabbed six rebounds.

The game was very evenly played, but the difference may have been how the teams fared from behind the arc. Kentucky made six of 14 (42.9 percent) of its three-point shots, while Georgia made just three of 18 (16.7 percent). Howard hit all four of her shots from behind the arc.

Georgia scored first on a Jenna Staiti layup but Kentucky scored the next six, on a Patterson jumper, two free throws from Wyatt and a Howard driving layup, to grab a 6-2 lead.

After UK took an 8-5 lead on a Dre’una Edwards layup, Georgia’s Gabby Connally scored seven in a row to give the Bulldogs a 12-8 advantage. But Kentucky would get a Wyatt layup and a Howard jumper to tie the game at 12 apiece.

After Georgia took a 14-12 lead, Kentucky tied the game on a Wyatt jumper with 2:57 left in the period. Staiti gave the Bulldogs a 16-14 lead in what turned out to be the final basket of the period, with 2:34 left in the first. The only point in the period after that came on a Howard free throw with 2:20 to play. Neither team scored for the remainder of the quarter and Georgia held a 16-15 lead after 10 minutes of play.

Early in the second period, UK took a 17-16 lead on a pair of Patterson free throws. But Georgia would score the next five points, taking a 21-17 lead in the process.

That’s when the Cats went on a big run. It started with a Wyatt layup, followed by a Howard jumper. Then, Robyn Benton broke loose for a breakaway layup before Howard hit a jumper and a three. Altogether, it was an 11-0 run that gave UK a 28-21 lead with 4:23 left in the first half.

After Georgia stopped the run on a three-point play from Connally, the Cats would close the half by scoring the last six to take a 34-24 lead into the break. Howard led all scorers with 12 points in the first half.

Georgia started the second half by scoring the first four points, cutting the UK lead to 34-28. After Howard scored on a layup, the Bulldogs scored four more in a row to cut it to 36-32.

Georgia would eventually get within three, 39-36, but Kentucky responded again. Patterson hit a three and then a jumper to extend the lead to 44-36. After a Georgia three, Olivia Owens hit a free throw line jumper to make it 46-39. After a Georgia free throw, Howard scored four in a row to make it a 50-40 lead with 1:43 left in the period. Kentucky would lead 51-44 after three periods.

Both teams struggled to score early in the fourth period. Kentucky made just one of its first seven shots, while Georgia made just two of its first seven. After Georgia scored the first five points of the period, Howard hit a three, then a jumper, to make it 56-49 UK with 4:31 left.

Georgia scored the next four points on two Staiti baskets, but then Howard connected on her fourth three-pointer of the game, giving UK a 59-53 lead with 2:48 to play.

Georgia got three free throws from Isaacs with five seconds left to cut the UK lead to 61-58. With one second left, Patterson hit one of two at the line to make it 62-58, which would be the final score.

Kentucky returns to action on Sunday, facing Ole Miss in the regular season finale at Memorial Coliseum. Tipoff is set for noon ET and the game can be seen on the SEC Network.