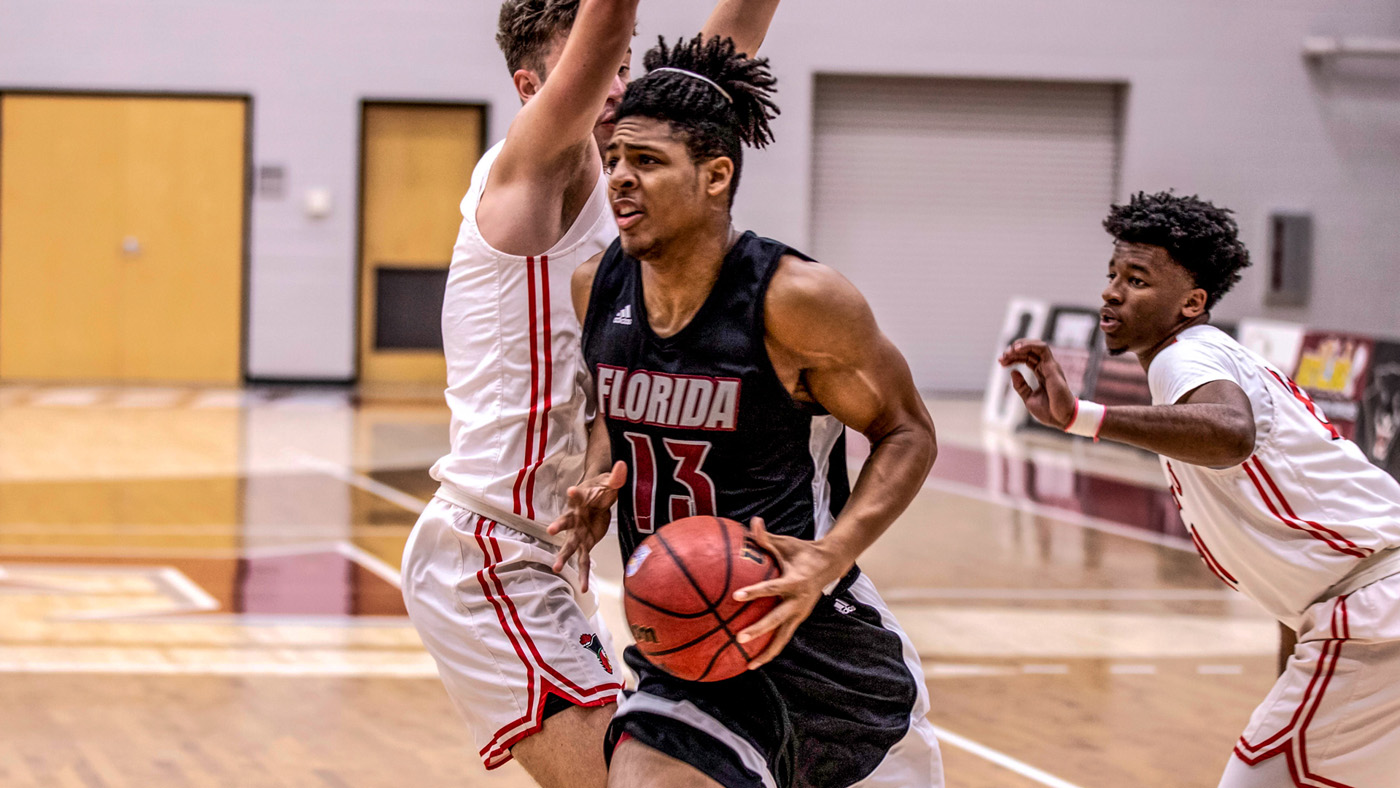 Panthers Come Up Short Against Bucs at Home

MELBOURNE, Fla. – Mekhii Noble recorded a double-double on 20 points, a career-high 14 rebounds and three blocks but Florida Tech (0-2) was unable to overcome a shaky final minutes and lost 77-71 to Barry (2-0) Thursday night at the Clemente Center.

It was a much different story than in the teams’ first matchup just 24 hours earlier, a game Barry won easily by 19 points on their home floor. This time around, Tech led 58-56 with 5:53 to go after a pair of free throws by Runako Ziegler but the Bucs responded with an 11-2 run. Barry then held off a Panther rally in the final moments by finishing the game 5-6 from the field on the way to earning their second win of the season.

“I’m proud of our guys and our effort tonight,” said head coach Billy Mims. “We made one big change in this game from last night, we controlled the tempo and didn’t let Barry turn the game into a track meet. It’s what we had to do to have a chance to win. We made these adjustments in a 24-hour turnaround and I thought we really did a great job.”

Noble led all players in the contest in points, rebounds and blocks while also adding two steals to his stat line. The junior shot lights out, making 10-11 from the field over his 37 minutes in the game.

“After last night’s game with Barry, I took Mekhii aside and told he can play much better than he did Wednesday,” Mims stated. “He’s one of the best post players in this league and tonight he showed it with his amazing play. Mekhii played one of the best games of his career. He was the beast we know he can be.”

Sesan Russell added 16 points, three rebounds and two assists while Sean Houpt tallied 13 points and five rebounds in addition to making all five of his attempts from the charity stripe. Nieja Jordan finished with eight points on 4-8 shooting, two rebounds and two steals and Ziegler recorded seven points, eight assists and four rebounds in the contest.

Niall Harris came off the bench and scored five points on 2-3 from the field with two steals while Elias Martin contributed two points and five rebounds in his second career game.

Justinas Marcinkevicius recorded a double-double with 16 points and 13 rebounds to lead the way for Barry, which had six total players finish with double-figure scoring in the contest.

The Bucs won the rebounding battle for the second straight game (46-38) while Tech had less turnovers (15-18). The Panthers controlled the points in the paint (48-26) but Barry’s bench provided much more support in the contest, outscoring Florida Tech’s 23-7.

Jordan kicked off the scoring right off the opening tip, laying it in to put Tech up 2-0 just seconds into the game. The play was back-and-forth early on with both teams trading buckets, but the Bucs were able to mount an 11-2 run and take an 18-8 lead with 11:57 to go in the first half.

Over the final 10 minutes of the half, Florida Tech was able to fight its way back with a 7-0 run with just under two minutes remaining. Houpt made five straight free throws to cut Barry’s lead to 34-30 and then Noble hit a short jumper with 48 seconds remaining to trim the margin to two.

After Amari Haynes scored a layup on the other end to put Barry up by four with just over 30 seconds left on the clock, Martin converted a layup at the buzzer for the Panthers to make it a two-point game, 34-32, at the half.

A monstrous slam from Noble early in the second half capped off an 11-3 run by the Panthers and propelled them into the lead, 46-45, with 15:04 to go. Tech then took its largest lead of the game at 56-53 off a pull-up three by Russell with 7:45 remaining. Barry responded with a fast break three by Marcelo Perez to tie the game.

Ziegler made a pair of free throws to put the Crimson & Gray back up, 58-56, with under six minutes left. However, Nick Anderson answered with back-to-back threes for the Bucs and they went on a quick spurt to grab a 67-60 advantage with 3:12 remaining.

Russell guided the Panthers back into the game by scoring five points in a 7-2 run, including a huge three with 1:39 left, to cut the deficit to 69-67. Barry answered with a long-ball by Jake Kakar followed by a fast break layup by Perez to regain a seven-point edge, 74-67, with 26 seconds to go.

Houpt was able to get to the hoop for a pair of late layups but it was not enough as the Panthers fell by six points on their home floor.

“Despite the loss, I am super proud of our team,” said Mims. “We were a 100% better basketball team tonight than we were last night. This was two games within 24 hours. We had two weeks off and only had one night to prepare for these games against Barry and our team played with tremendous effort tonight.”

Florida Tech is back in action Saturday on the road at Tampa. Tip-off is set for 2 p.m. at the Bob Martinez Athletics Center in Tampa, Florida.

For the latest news, updates and information on the Florida Tech men’s basketball team, visit FloridaTechSports.com. Fans can also stay up to date on the latest Panthers news by following Florida Tech Athletics on Facebook, Twitter, Instagram and YouTube.