Skip to content
You are here
Home > 01 FEATURED > Kentucky Falls to Ole Miss – SEC Tournament is next week in Greenville, S.C. 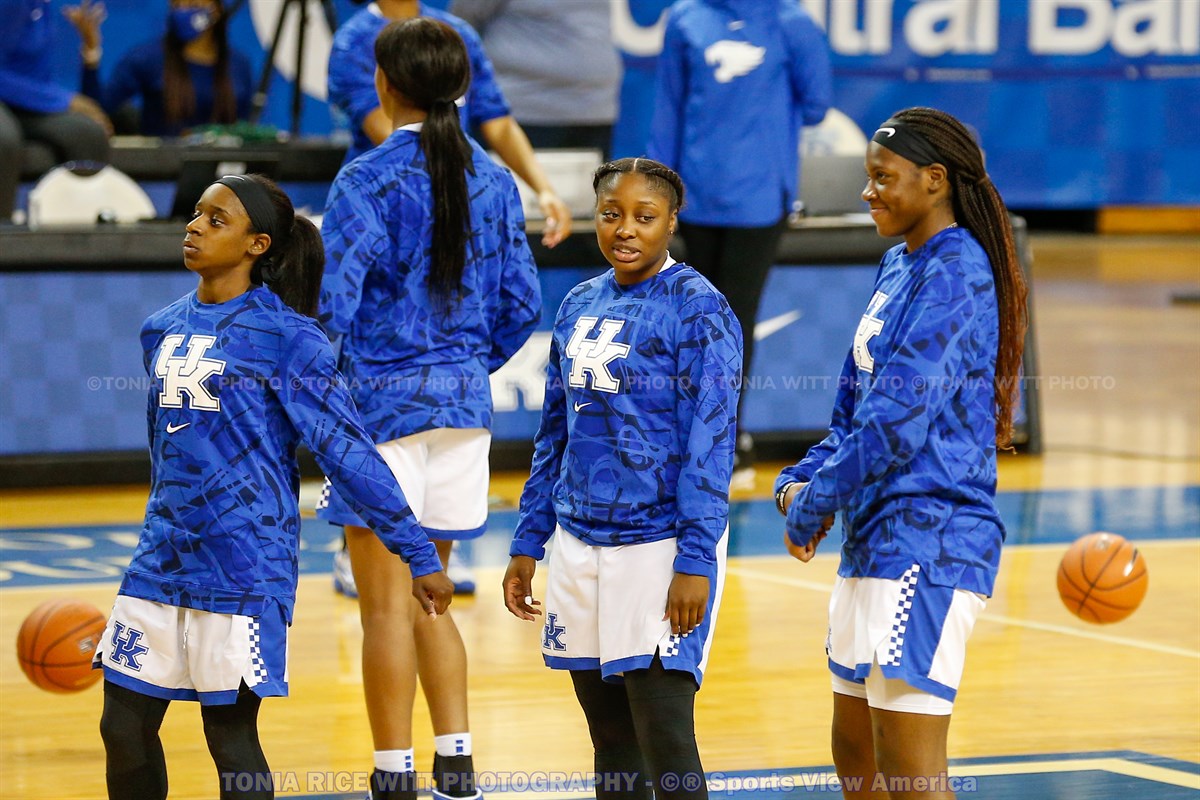 Senior Chasity Patterson, playing her final home game, scored 18 points for the Cats, who are now 16-7 overall and 9-6 in the SEC.

Kentucky struggled shooting the ball the entire game. Kentucky made 22 of 66 (33.3 percent) for the game, including just five of 17 (29.4 percent) from three-point range.

Ole Miss got on the board first on a Donnetta Johnson jumper but Kentucky answered on a basket by Howard. That was the first of four ties early in the game before Kentucky scored five in a row to lead 12-9. After the Rebels got within one, the Cats scored 10 in a row, two free throws each by Patterson and KeKe McKinney, a layup by Edwards and consecutive baskets by Howard, to lead 22-11 with 2:04 left in the period.

The Rebels would snap the UK run on a Shakira Austin basket with 1:13 left in the period. Those would be the final points of the period, which ended with Kentucky leading 22-13.

Ole Miss would score the first two baskets of the second period to cut the UK lead to 22-17. But Treasure Hunt buried a corner three, then Robyn Benton scored on a put back to give the Cats a 27-17 advantage.

Kentucky would grab a 29-20 lead on an Edwards layup with 6:25 left in the half. From there, neither team would score for more than two minutes until Howard connected on a jumper to make it 31-20 UK with 4:13 left in the half. Those would be the Cats’ last points of the period.

Ole Miss would score on a Tiya Douglass jumper, and a three-point play by Austin to cut the UK lead to 31-25, which would be the halftime score. Austin led all scorers with 11 points in the first half, while Howard had 10.

Early in the second half, Ole Miss continued to chip away at the UK lead. The Rebels scored the first four points of the third period to make it 31-29 and to force a UK timeout. But that did not stop the onslaught. Out of the break, Ole Miss got a pair of three-pointers from Snudda Collins, first to take the lead, then to extend it to 37-31.

Kentucky finally got on the board with Edwards his a three with 6:05 left in the third period, cutting the Ole Miss lead to 37-34. The teams would trade baskets, a Madison Scott layup for Ole Miss and a McKinney jumper for UK, before Ole Miss scored four in a row to lead 43-36 with 3:32 left in the third.

The Cats would respond near the end of the third period with a 6-0 run, keyed by a basket and free throw from Howard with 1:55 left in the period which made it 43-42 Ole Miss, which would be the score through periods.

In the fourth period, the teams each made a pair of free throws, keeping the Ole Miss lead at one. Collins then hit a three to give the Rebels a 48-44 lead, but Hunt answered on UK’s next possession with a three of her own, cutting the lead back to one, 48-47, with 7:36 to play.

The Rebels would take a 51-47 lead before Kentucky mounted a run. The Cats got a free throw from McKinney, two free throws from Howard and a Patterson jumper in the lane to take a 52-51 lead. Ole Miss answered right back when Austin scored in the lane, giving the Rebels the lead back, 53-52.

Patterson would score on a driving layup on UK’s next possession as the Cats took the lead back, 54-53. But Ole Miss would get a pair of Scott free throws to re-take the lead, 55-54, with 4:18 to play. The Rebels would extend the lead to 57-54 on an Austin layup with 3:33 left in the game.

Kentucky would continue to chip away at the lead, getting within a point twice. But Ole Miss got a layup from Austin and a three from Collins to lead 64-58 with 1:07 left and the Cats simply ran out of time.

Kentucky returns to action later this week in the SEC Tournament. More information about the date, time and opponent will be determined at the conclusion of play on Sunday.

On how to prepare the team for the tournament….

“You know, we just talked. It was a disappointing loss. Obviously not the outcome that we wanted, and how we wanted to show today. However, it happened, we can’t take it back, all we can do is learn and move forward, and just talk to them about regrouping. We have to regroup and be ready to head into the SEC Tournament.”

“Well, I think it was just frustrating for everyone overall. I thought we had some really good looks, they just didn’t go in, which forced us to play in panic offensively. Some shots that we have been making did not go. I just think we have to do a better job of finishing through contact. So, yes, there were some fouls, but being able to hammer down and finish some of those. So, we’ll go back to work on that.”

On something Ole Miss does to give Kentucky trouble…

“I think they play extremely hard. They’re never out of the game. They’re physical, they’re athletic. I thought we started the game with the intensity that we needed and kind of tapered off. I thought our offense effected our defense.  But overall, today was not our day. Disappointing, but we will go back to work.”

“I’m really proud of Treasure (Hunt). I thought she came in and gave us some really solid minutes in Georgia, and also today, but last week she had one of her best practices. The lightbulb went off. She continues to get better and better. She was efficient offensively. I thought she held her own defensively. Um, and that’s what we’ll need form Treasure going down the stretch.”

On having an experienced team going into the tournament…

On the season going by so quickly…

“Yeah, the season has flown by. I want to give our medical team, Courtney Jones and our administration a shoutout for giving us the opportunity to play, keeping us up to date on the COVID protocols, keeping everyone safe. So, that was big for us to be able to play our games. It has been an extreme blessing to the be the University of Kentucky head coach. It has come with ups and downs. I have learned a lot about myself and the team. We still have a lot of basketball left to play.”

On the fan base having high hopes…

“Well, they should have high hopes. This team has performed extremely well this season. You know, we are very talented. One thing about this team, we have been resilient all year. It is a journey, you will have your ups and downs. The thing is, every time we have been knocked down this year, we have answered the call and stepped up. This time will be no different.”

On your career at Kentucky…

“Thank you. Being a Kentucky Wildcat has been such an honor. I have enjoyed my three years here. Like you said, this wasn’t the outcome we wanted, but I still enjoyed my time here and the season isn’t over. We still have work to do, so I’m looking forward to that.”

On getting off to a good start vs. Ole Miss…

“I feel like we had pretty good intensity. We came out with pretty good intensity. Credit to Ole Miss, they were hitting shots. So, we can’t take credit for that, we give them credit for that. But, I feel like, overall, we just have to buckle down and work on what we need to work on. Ole Miss hit great shots. We played great D (defense), but, you know, we just couldn’t get the job done. There are no excuses for that.”

On how the team will bounce back…

“I am very confident that we will bounce back from this. We just have to go in, go to practice, work on the things that we need to work on. I feel like we can get back in the gym and work on stuff we need to work on. I can’t say right now exactly what we need to do, but we’re just going to play Kentucky basketball. We’re going to lock in on defense. And, we’re definitely going to be ready at the SEC Tournament.”

“It came down to us. We couldn’t hit a shot, and that happens. We’re going to have bad shooting nights. So, I feel like just getting back in the gym, getting shots, and just working on our defense. You know, just coming together, because you know, we’ve been through adversity all season, so I feel like we’re going to bounce back from this, and it’s just another bump in the road for us.”

“Definitely super proud of Treasure (Hunt). She came in and stepped up big time for us. Got a couple of offensive rebounds, got to the line. She has so much potential here at Kentucky, and it’s just the beginning for her and her career. So, I’m excited to see how we move forward with her.”

On memories off the court…