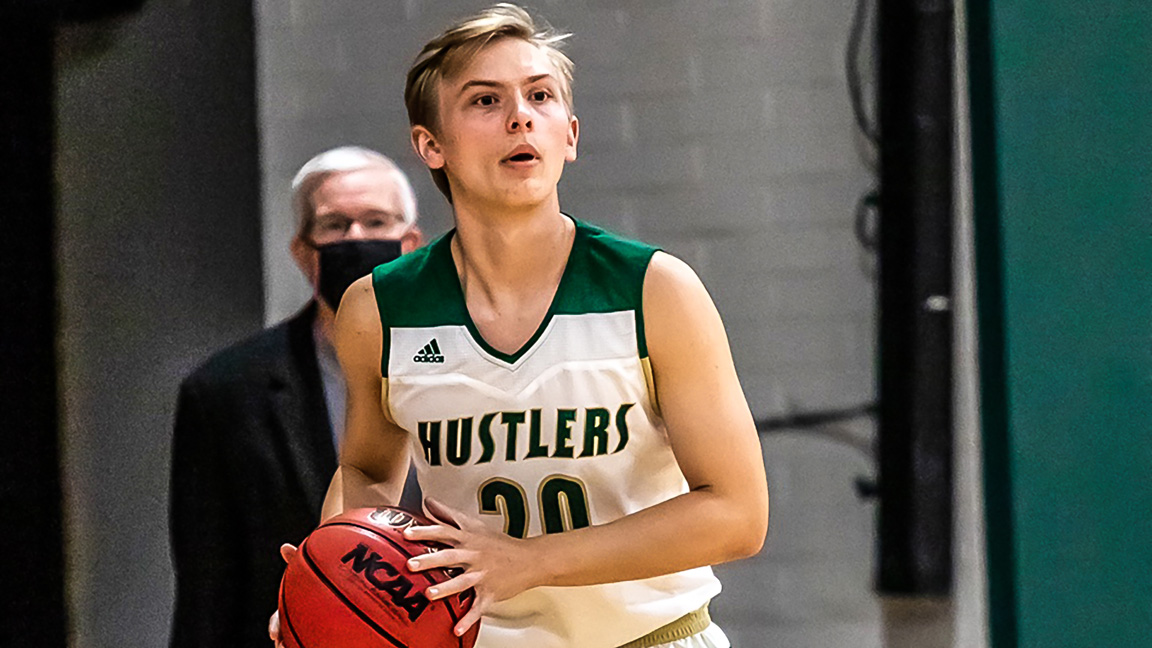 Son of the Panthers’ head coach is joining the program

MELBOURNE, Fla. – One of the top senior guards on the Space Coast, Josh Mims decided to stay local and has signed to play collegiate basketball for the Florida Tech men’s basketball program and his father, head coach Billy Mims.

The younger Mims is looking forward to continuing his education and basketball career at Florida Tech.

“I chose Florida Tech because of the high-quality education it offers,” said Josh Mims. “It’s a perfect academic fit for me with my interest in pursuing a degree in Civil Engineering. I’ve also grown up watching Florida Tech basketball. I was on the sideline when they won the 2012 SSC Championship and even travelled with the team to the NCAA Regionals in Huntsville, Alabama.

“I’ve seen the Panthers against every team in the SSC and watched many big wins over nationally ranked opposition. I’m now excited to be a part of this Panther team and competing against a high level of competition in the Sunshine State Conference.”

Josh Mims is a 6-2 playmaking guard who averaged 10.9 points, 5.8 assists, 4.9 rebounds and just under one steal per game while serving as a co-captain for Melbourne Central Catholic High School as a senior.

He ranked in the top six in Florida Class 3A District 10 in almost every statistical category, including first in total assists (116), double-doubles (3) and free throw percentage (71%), second in made threes (33) and total rebounds (98), and third in total points (217) and free throws made (35).

Mims’ former head coach at Melbourne Central Catholic (MCC) believes Josh Mims is making the right choice to stay on the Space Coast and play for his father and the Panthers.

“What a tremendous opportunity for Josh to play for his dad at Florida Tech,” exclaimed MCC head coach Brent Roberts. “It takes a special bond between father and son to be able to transition to coach and player. With the character and high expectations both have for success, the transition will be seamless. Both men are class acts.”

Prior to his time at MCC, Mims played down the road at Melbourne High School during his freshman through junior seasons.

In 2019-20, Mims helped lead Melbourne to an 18-11 record, a district runner-up finish and regional quarterfinal appearance while averaged 7.9 points, 2.8 assists, 2.0 rebounds and 1.2 steals per game. He ranked first on the team in assists and assist/turnover ratio (1.38) in addition to leading the team in three-point percentage (42%) and free throw shooting (65%).

As a sophomore in 2018-19, Mims was a starting shooting guard for a Bulldog team that was ranked as high as No. 5 in Florida Class 7A, boasted a final record of 25-5, won the district championship and made it to the regional final. He averaged 4.2 points and 1.2 assists per game that season while shooting 36% beyond the arc. One year earlier, Mims became the first freshman in school history to start a game for Melbourne’s varsity basketball team in 2017-18.

In addition to a good prep career, Mims also has a bevy of international playing experience, including playing for England U15 National Team at the FIBA Copenhagen Invitational in the Summer of 2017. He led England with 21 points in the Bronze Medal Game vs. Sweden at the event. Later that summer, Mims was a guest player for the Folkestone Saints at the Wimereux, France Invitational. He was the leading scorer for the Saints and earned MVP for the event.

In the Summer of 2019, Mims was picked as the All-Star Game MVP after scoring 27 points at the Euro Elite All-Star Camp in Heraklion, Crete at the U19 World Championships.

If it was not for COVID-19, Mims would have competed for Great Britain U18 National Team at the FIBA Championships.

“I’m very excited that Josh has chosen to be a Panther, and despite the inherent challenges, chosen to play for me, his dad,” said the senior Mims. “Obviously, I’ve watched him play for his entire career and know his strengths and weaknesses better than anyone. Josh is a true leader which makes him an outstanding point guard prospect. However, he also sees the court extremely well and gets just as excited making a great pass to a teammate for an assist as he does knocking down a big three, and he does shoot it well too!

“Having grown up on the sidelines of a basketball court and watching the college game up close for so many years, he’s developed a high basketball IQ, and he’s the most unselfish player that I’ve ever watched. Those are two pretty important attributes for point guards that are difficult to teach.”

When asked about the challenges of coaching his own son, Mims remarked, “There have ve been a lot of very successful father-son coaching situations in college basketball. Right here at Florida Tech, one of my predecessors, Tom Folliard Sr., coached both his sons, Tommy and Kevin, and they won a lot of games together for the Crimson and Gray. I hope Josh and I can experience the same over the next four years.”

“I have always wanted to play for my dad, ever since I was a little kid,” said Josh Mims when asked about playing for his dad. “To finally be able to do that is very exciting. With the success he’s had, and his knowledge of my abilities, it should make for a rewarding experience.

“It may take a little getting used to calling him Coach, instead of Dad on court, but I’ll start working on that this summer.”

For the latest news, updates and information on the Florida Tech men’s basketball team, visit FloridaTechSports.com. Fans can also stay up to date on the latest Panthers news by following Florida Tech Athletics on Facebook, Twitter, Instagram and YouTube.