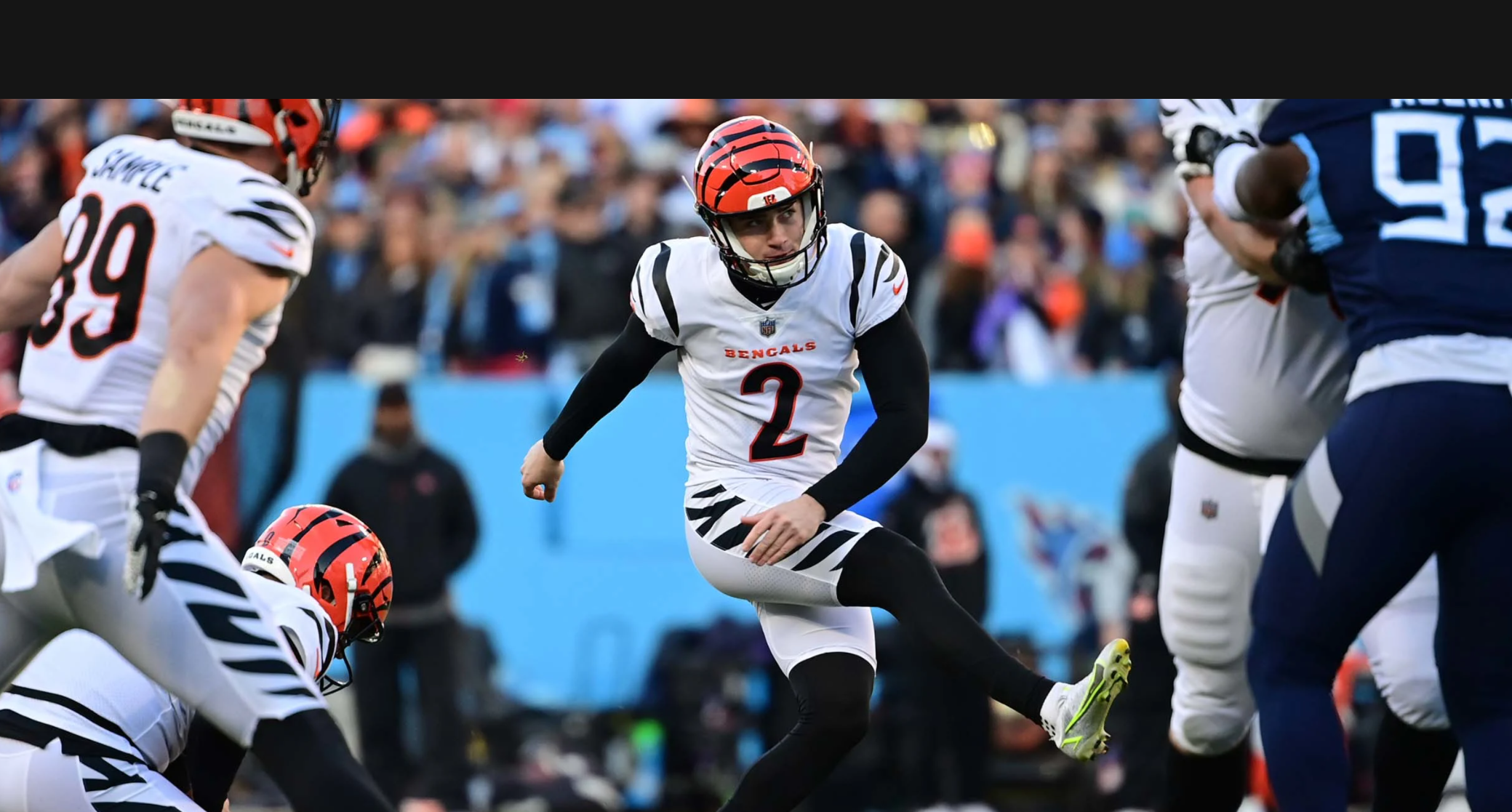 Evan McPherson is the man of the hour after booting the Bengals to two straight postseason wins. Photo Credit Bengals.com

(NASHVILLE, Tn.) – When the Cincinnati Bengals faced off against the Tennessee Titans in Nissan Stadium on Saturday afternoon, something had to give. Cincinnati was 0 – 7 in its previous road playoff games. The Titans hadn’t won a home playoff game since 2003.

As Evan McPherson’s 52-yard field goal split the uprights as time expired, it was the Bengals who ended their ignominious streak with a scintillating 19 – 16 upset over the number one-seeded Titans. Improbable as it sounds, the long-suffering franchise now finds itself a scant sixty minutes away from an unlikely Super Bowl appearance.

“All that was going through my mind was we get one more game, guaranteed one more game,” McPherson said after his heroics. “We get another chance to go out and win another game. And we’re one step closer to our goal.”

“That guy is unbelievable,” said quarterback Joe Burrow about his kicker. “He was talking to Brandon (Allen) as he was going out to kick, and he gave a little warmup swing and he said, ‘Ah, it looks like we’re going to the AFC Championship,’ right before he went out there and kicked it.”

Déjà vu, you say? The winning boot was actually Money Mac’s fourth of the game without a miss. Earlier kicks of 38, 45, and 54 yards had kept Cincinnati fans on the edge of their seats all afternoon long. It was a repeat performance from just a week before when Even Evan also hit four field goals against the Raiders to help his team survive and advance. McClutch now has 27 playoff points which moves him into second place behind Jim Breech’s 52.

Without McPherson’s leg, there would be no glorious celebration on Broadway from the multitude of Cincinnati fans who journeyed down to Music City for the much-anticipated contest. The game was ugly, with the Titans sacking Joe Burrow a postseason single game record of nine—yes, NINE—times. And these weren’t just love taps on the shoulder. These were brutal, body-numbing, appendage-dismembering type poundings you normally see carried out by the mafia members.

Burrow said he was fine afterwards. I’m not so sure. At the minimum, let’s charge Cincinnati’s O-line with malpractice. If Burrow had been injured, manslaughter charges would have certainly been in order. Trust me, it looked even more awful from the booth. With a solid core of young players at the skill positions now in place, it’s paramount the Bengals place all priorities on securing some talent up front to protect their valued investment.

When all was said and done, however, the Tennessee game came down to McPherson…and of course, Burrow. In what might be called a ho-hum contest for him, Joey Franchise still completed 28 of 37 passes for a whopping 348 yards. His uncanny ability to connect with Ja’Marr Chase (5 catches for 109 yards) and Tee Higgins (7 catches for 96 yards) are what Super Bowl dreams are made of.

The running game—missing in action of late—also showed a smidgeon of resurgence. Joe Mixon scored the only touchdown of the afternoon with a 16-yard high-stepping scamper into the endzone, giving the Bengals a 16 – 6 lead with 9:34 left in the third quarter. For the game, Mixon had 54 yards (49 of them coming in the second half) on 14 rushing attempts. If the Bengals are to advance, he’s going to have to recapture much of his midseason prowess.

The Bengals defense turned in a solid performance as well, holding Derrick Henry—who was returning from a foot injury—to 62 yards on 20 carries. In addition, the much-maligned unit also intercepted Ryan Tannehill three times. Jessie Bates cashed in on the first play of the game, thereby setting the tone. Mike Hilton’s bat and pick in the third quarter was huge, snuffing out a Titans’ potential score from first and goal at the nine. And finally, Logan Wilson’s grab off of an Eli Apple deflection led to McPherson’s magical moment.

The Bengals have been known for making a few draft blunders over the years. Many snickered when they “squandered” their No. 5 pick on a kicker. Eighteen games in, they’re riding that pick all the way to the AFC Championships.