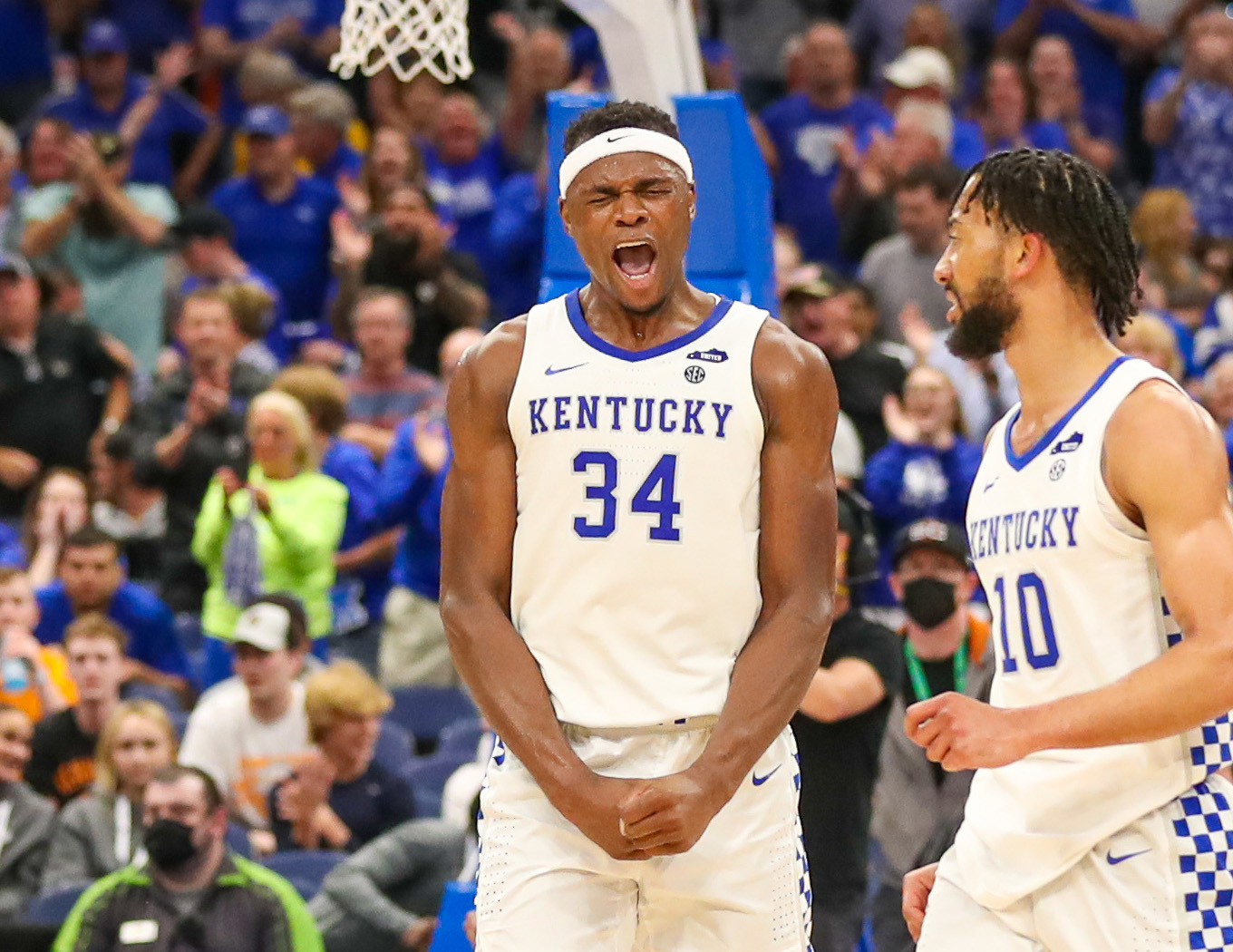 Tampa, Florida – Kentucky and Tennessee split their two games during the regular season with the Wildcats running away with the game in Lexington beating the Volunteers 107-79, but Tennessee administered a little revenge when the two met in Knoxville by taking out the Wildcats 76-63.

This was the rubber match in today’s SEC tournament semifinals and with the 69-62 loss to Volunteers, the Wildcats will now go home to wait for their NCAA tournament destination.

The Volunteers have been the most consistent rival for Kentucky over the years, so that makes this loss even more painful for all the Big Blue Nation who traveled to Tampa for this year’s tournament.  For Kentucky it is more disappointment as the Wildcats have not won a tournament championship since 2018.  With the win the Volunteers will try to win their first tournament championship since 1979.

Tennessee won the opening tip and scored off a rebound put back shot by their Center Uros Plavsic.  It didn’t take long before Tennessee was up 10 to 4.  Back-to-back three-pointers by UT’s Josiah-Jordan James gave the Volunteers a huge momentum.

An Oscar Tshiebwe dunk helped cut the lead to four, but another basket by Tennessee put them up 12-6 at the first TV timeout.

After a couple more three-pointers the Vols led 18-8, when a timeout was called with 11:42 left in the half.  Kentucky was only shooting thirty percent from the field at the time and Tennessee had made four of seven three-pointers.

Just after the teams came back from timeout Oscar Tshiebwe picked up his second foul and had to go to the bench.  A four-minute drought followed for both teams and it was finally ended when Washington threw an alley-op pass to Brooks for a dunk to cut the lead to seven.

Brooks had eight straight points to keep Kentucky within striking distance at 23 to 18, but a waved off basket and missed free-throw by Washington started a mini run for the Vols as they outscored the Cats 5-2 to take a 29-20 lead with 2:50 to go in the half.

Kentucky continued to struggle as everything seemed to be going the Volunteers way.  Several bad plays down the stretch by Kentucky helped the Volunteers build an eleven-point lead and take a 33-22 lead into the dressing room at halftime.

The Cats were shooting a dismal 8 for 29 from the field and 0 for 8 from behind the three-point line, that coupled with the fact that Player of the Year Oscar Tshiebwe only played eight minutes in the first half explained why the Wildcats were in big trouble with an eleven-point deficit to start the second stanza.

Tshiebwe scored the first basket of the second half to give the Wildcat fans a little hope.

The Wildcats were off sync today.  Not having Tshiebwe for twelve minutes in the first half had really disrupted their rhythm.  Tennessee had stretched the lead out to 46-33 when the 12:00 minute TV timeout was called.

Kentucky picked up the defensive intensity and caused several turnovers, which led to a few easy baskets and a mini 10-5 run.  The Wildcats were within eight (51-43) with 8:05 to go in the game, when the Volunteers called timeout.

Tennessee’s freshman guard Kennedy Chandler made two baskets in a row to put the Volunteers back up by twelve, then Kentucky made another run to get it down to six, but a couple of empty possession by the Wildcats let the Volunteers stay at a comfortable distance of eight points.

Two straight fouls were called on Tshiebwe and he had to leave the game with 3:37 left with his fifth foul.  The fifth foul not only removed Tshiebwe from the game, but it kept Kentucky from having a crucial possession when they needed it most.

Despite Tshiebwe’s removal from the game, the Cats rallied from twelve down to only five when Sahvir Wheeler made two free throws with only 1:54 to go in the game.

The Cats could never get closer than four points as they went down to defeat at the hands of the Vols 69-62.

Kentucky was led in scoring by Brooks who had 19 points and Washington who scored 17.  Tshiebwe had another double-double with 13 points and 11 rebounds.

It was poor shooting that kept the Cats from the championship game.  They only shot 34 percent from the field and was a dismal 2 for 20 from behind the three-point line.  Also, Oscar Tshiebwe only played 25 minutes due to foul trouble, so that was a huge issue as well.

Kentucky will enter the NCAA tournament with a 26-7 record.