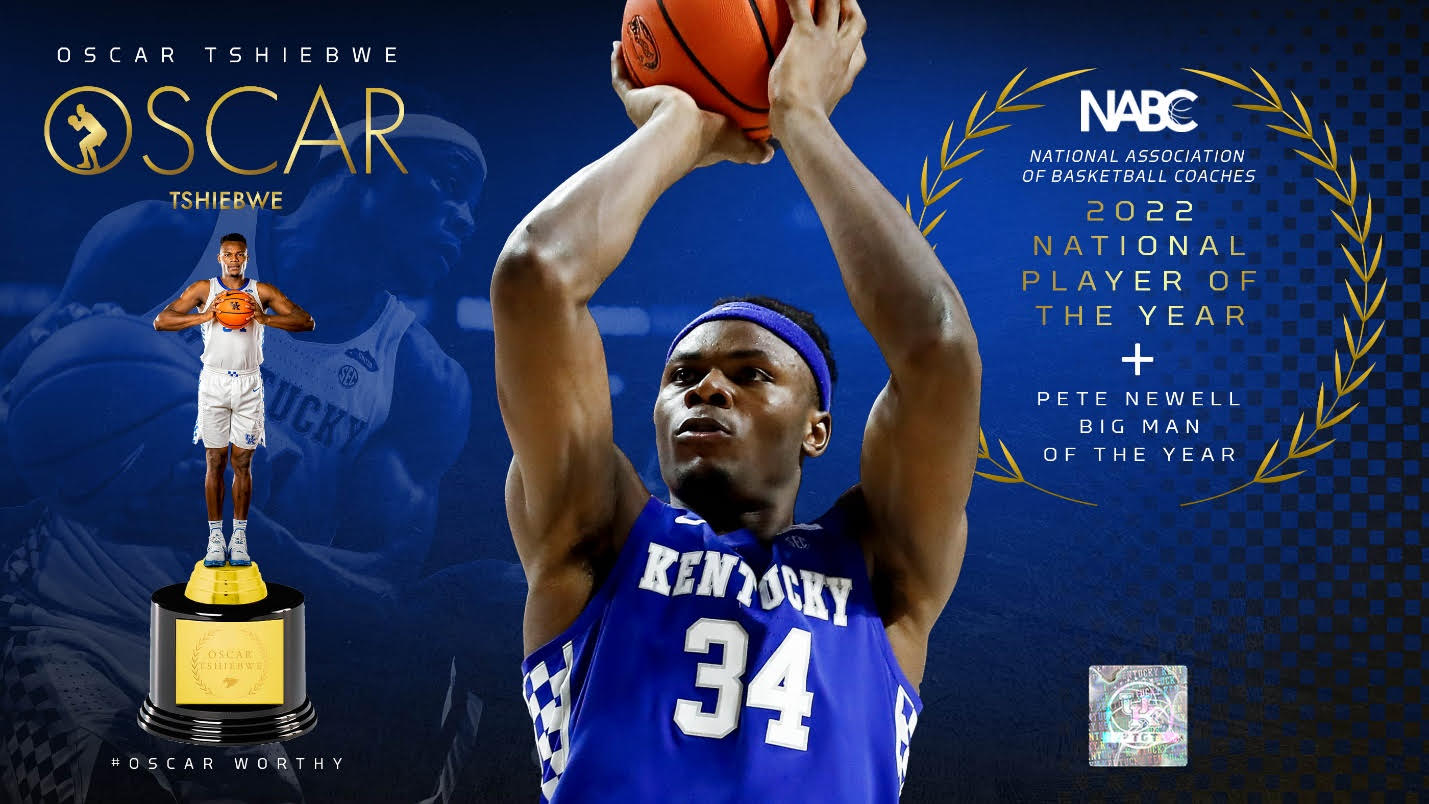 LEXINGTON, Ky. – Following an historic season-long performance on the hardwood in 2021-22, Kentucky men’s basketball junior forward Oscar Tshiebwe made history again on Tuesday. Tshiebwe became the first Kentucky player and the first player from the Southeastern Conference to earn National Player of the Year honors from the National Association of Basketball Coaches. He was also tabbed the Pete Newell Big Man of the Year.

“First of all, I want to thank God for everything that he has done for me and my family,” Tshiebwe said. “I want to also thank my coaches, the UK staff and most importantly my teammates for helping me to get to where I am today. I also want to thank the Big Blue Nation for your support. I’m very grateful for everything. God bless.”

Tshiebwe is the second UK player to earn the Pete Newell award as Anthony Davis also captured the distinction in 2012. He is the second player coached by John Calipari to earn NABC Player of the Year honors as Marcus Camby was the selection in 1996 when Calipari was the coach at UMass.

The NABC has honored the nation’s best player dating back to 1975. The NABC has awarded a Big Man of the Year every season since 2000.

In addition to his offensive and rebounding prowess, on the defensive end Tshiebwe was the only major conference player who averaged at least 1.6 blocked shots and 1.6 steals per game during the regular season. He also became only the third player in program history to amass at least 500 rebounds in a season. Tshiebwe finished the year with 515 boards.

Tshiebwe corralled at least 10 boards in all but two games this season and finished the season with 21 straight games with double-digit rebounds. That’s a record for the Wildcats dating back to the 1967-68 season with complete game-by-game rebounding records. Dan Issel had two stretches of 12 such games. It’s also the longest stretch by any SEC player since at least 1996- 97. It’s also the longest streak in one season by any Division I player since Rokas Gustys of Hofstra had 23 straight in 2016.

Tshiebwe was elite on the glass from the very beginning of the season. He set new records for the Champions Classic and UK debut with 20 boards vs. Duke in the season opener, nearly tied the Rupp Arena record with 20 rebounds in his first home game, and then shattered that Rupp record with 28 boards vs. Western Kentucky. That easily surpassed Shaquille O’Neal’s previous mark of 21. It’s worth noting Tshiebwe did that primarily against the tallest player in college basketball, Jamarion Sharp, who stands at 7-foot-5. With 20 boards the following game against Missouri, his 48 boards tied for the most over a two-game span by any Division I player over the last 25 seasons (according to ESPN Stats & Info).

Tshiebwe concluded the season with 16 straight double-doubles, the longest streak since complete game-by-game rebounding records were kept dating back to 1969 for the Wildcats. He totaled 28 double-doubles this season which is a new UK single-season record.

Tshiebwe was responsible for 37.8% of all of UK’s rebounds this season. Taking away team rebounds, that number jumped to 41.2%.

Tshiebwe is racking up postseason honors by the day. The major honors he’s won so far include: