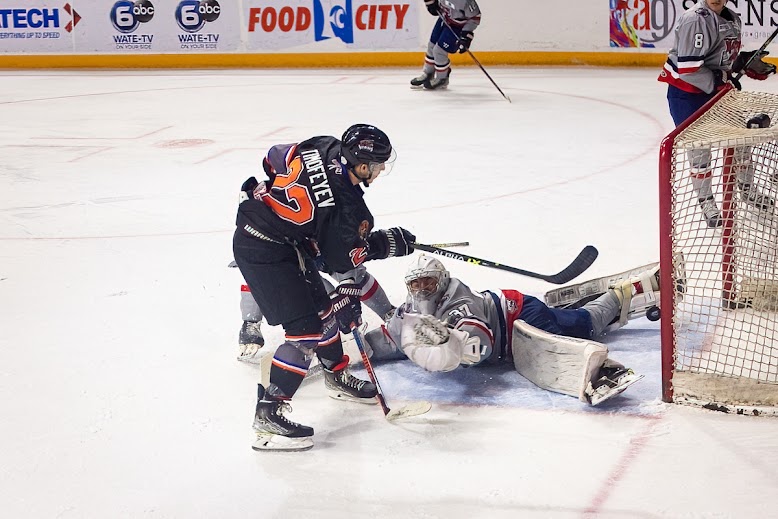 The Ice Bears (38-9-4) have won six straight games and moved into a tie for first place with Huntsville’s loss to Roanoke. The Bulls (15-29-6) were eliminated from playoff contention due to the loss and the Rail Yard Dawgs’ win.

Kyler Matthews scored the only goal of the opening period with a wrist shot from the slot. Razmuz Waxin-Engback tried to feed the puck across the zone from the left circle, but the pass was deflected and came to Matthews between the hashes. Matthews quickly released the puck and beat Austin Lotz at 8:51.

Timofeyev extended his current goal streak to seven games with a one-timer on the power play at 2:56 of the second. Dino Balsamo received the puck on the right side of the crease and slid it across to Timofeyev in the left circle.

Jordan Martin scored on a rebound to get Birmingham on the board less than a minute later. Brody Duncan fired a shot from the left point and Kristian Stead kicked it to his left. Martin corralled it on his backhand side before it could escape and put it back on net.

Waxin-Engback scored off the backdoor at 6:50 to give the Ice Bears a 3-1 lead. Timofeyev tried to find Brady Fleurent from the left half wall, but his initial attempt was blocked back to him. Waxin-Engback snuck behind Lotz and Timofeyev found him for the tap-in for his 22nd goal of the year.

Colton Fletcher slapped a backhand by the crease past Stead to bring Birmingham back to within one with less than a minute to go before the second intermission. Sam Stormoen’s wrist shot from the high slot hit heavy traffic at the top of the crease and Fletcher found the loose puck before Stead could locate it.

Timofeyev put Knoxville ahead to stay when he kept the puck in the Birmingham zone along the left wing, skated into the circle and muscled a shot past Lotz at 11:12.

Scott Donahue scored with just over three minutes remaining on the power play to pull the Bulls within one again. The Bulls had another chance on the man-advantage for the final two minutes, but could get the tying goal.

Stead finished with 14 saves to pick up with 17th win of the season. Lotz made 18 stops for the Bulls.

The two teams will head back to Birmingham to conclude the home-and-home weekend Saturday night.

ABOUT The Knoxville Ice Bears: The Knoxville Ice Bears organization began in 2002 and was an inaugural charter member of the Southern Professional Hockey League (SPHL) in 2004. As four-time SPHL Champions, the Ice Bears are an experienced and established organization, offering the city and its’ visitors a balanced product of highlight-reel hockey, unique and exciting intermission activity and endless fan interaction, presenting the most affordable, family-friendly way to enjoy sports and entertainment. Season, Partial Season and Flex Tickets are now on sale.  For more information, visit www.knoxvilleicebears.com or call (865) 525-7825.