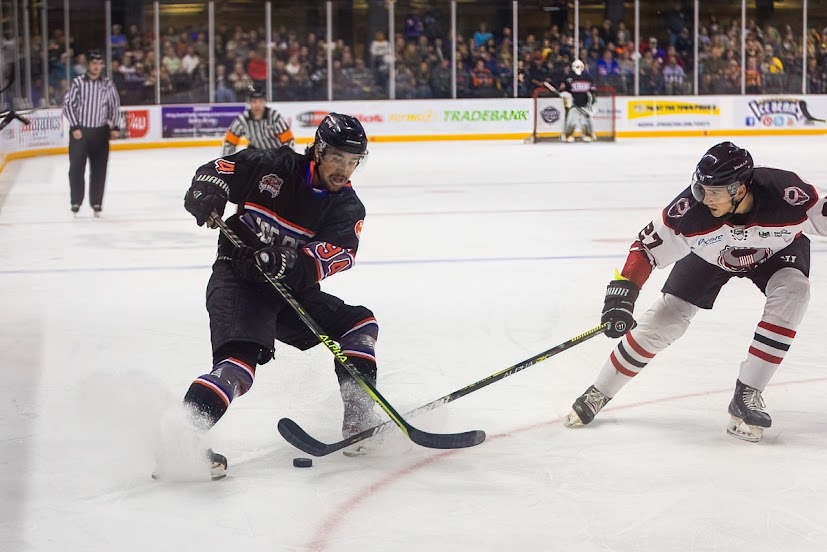 The Ice Bears (40-10-4) remain in first place in the SPHL standings with two games remaining and become just the second team in league history to win 40 games in the regular season. The Rail Yard Dawgs (23-24-7) had a five-game win streak snapped with the loss.

Knoxville struck first when Cale List fed the puck across the Roanoke blue line to Nick Leitner at the right point. Leitner shot the puck towards the net and Jared Nash swept in front of the crease and redirected a shot past Sammy Bernard at 4:54.

Leitner lifted the puck through the neutral zone to Andrew Bellant at the blue line. Bellant split two defensemen and pinpointed a backhand by Bernard’s blocker at 16:55 to give the Ice Bears a 2-0 lead at the first intermission.

Steven Leonard tapped in a rebound from the slot on the power play to make it 3-0 at 5:36 of the second. Bellant and Dino Balsamo worked the puck down low and the cross-ice pass was tipped into the slot by Bernard. Leonard cleaned up the rebound for his third goal of the year.

Mac Jansen got Roanoke on the board when a shot by Travis Armstrong hit a stick and came to him at the bottom of the circle. Jansen used the backdoor lane to slip the puck behind Jimmy Poreda at 11:47 of the second. The Rail Yard Dawgs drew to within a goal when Travis Broughman connected on a one-timer at 17:15. Jeff Jones became Roanoke’s all-time leading scorer with an assist in the second period.

Knoxville pushed its lead back to two goals early in the third when Jason Price scored on the power play at 1:19. Tanner Salsberry finished off a three-on-two with a slick backhand at 5:03 to make it 5-2. Anthony McVeigh beat Bernard top shelf after a takeaway in the Roanoke zone to make it a four-goal game at 8:36.

Armstrong and Nick Ford scored two minutes apart to cut the deficit back to two goals. Stepan Timofeyev scored on an empty net with just over a minute left to cap off the scoring.

Poreda finished with 26 saves for the Ice Bears. Bernard had 17 stops for Roanoke.

The Ice Bears will visit Evansville on Friday before returning home to host the Thunderbolts and close out the regular season. Tickets for the Saturday night game are available at www.knoxvilleicebears.com.

ABOUT The Knoxville Ice Bears: The Knoxville Ice Bears organization began in 2002 and was an inaugural charter member of the Southern Professional Hockey League (SPHL) in 2004. As four-time SPHL Champions, the Ice Bears are an experienced and established organization, offering the city and its’ visitors a balanced product of highlight-reel hockey, unique and exciting intermission activity and endless fan interaction, presenting the most affordable, family-friendly way to enjoy sports and entertainment. Season, Partial Season and Flex Tickets are now on sale.  For more information, visit www.knoxvilleicebears.com or call (865) 525-7825.