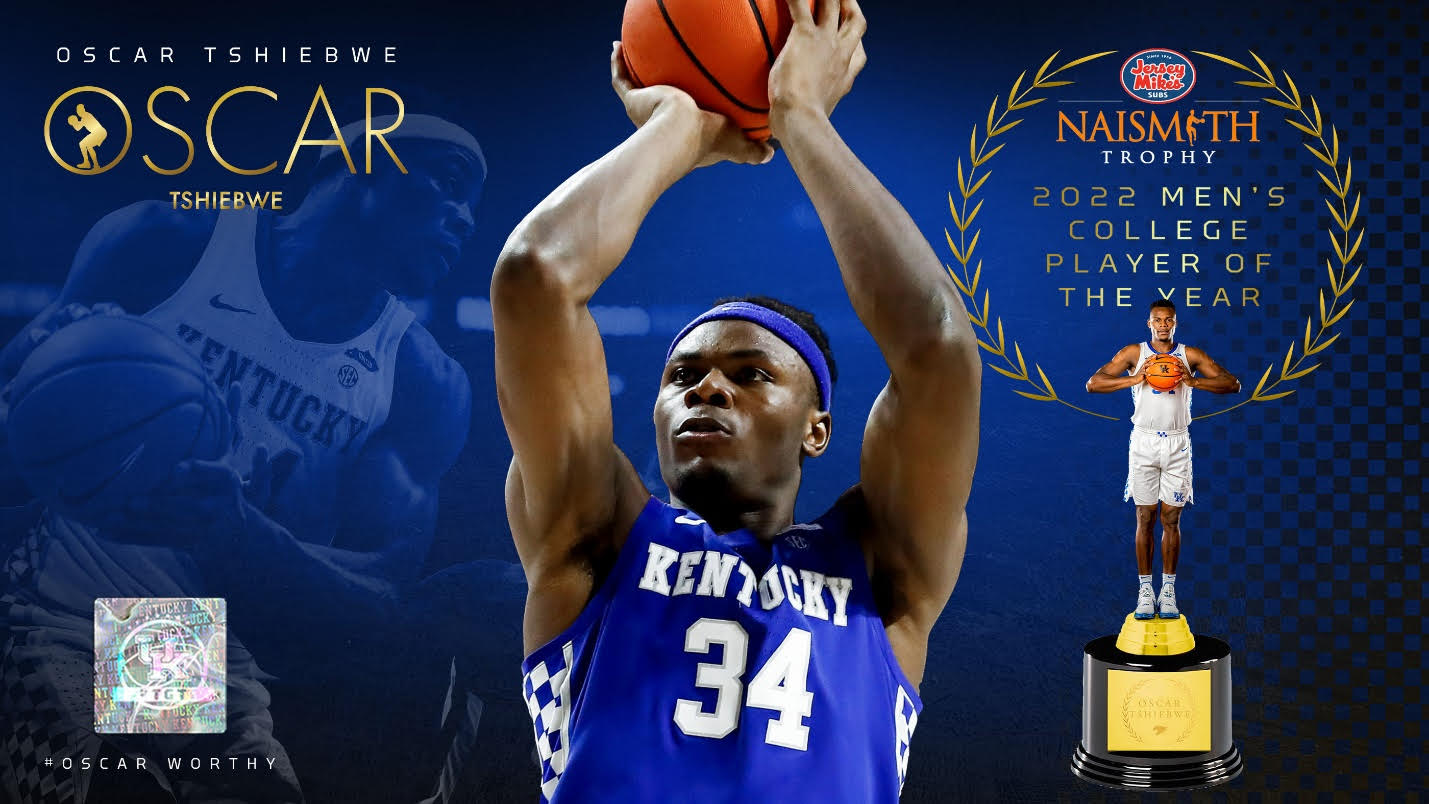 NEW ORLEANS – Sunday in New Orleans Kentucky’s Oscar Tshiebwe was awarded one of the most prestigious honors in college basketball, the Naismith Trophy which is presented to the nation’s best player by the Naismith Memorial Hall of Fame.

The Lubumbashi, Democratic Republic of the Congo native, is the second recipient of the honor in program history. He joins Anthony Davis (2012) as winners of the award. Tshiebwe, Davis and Pete Maravich (LSU – 1970) are the recipients from member institutions of the Southeastern Conference. He is the third player coached by John Calipari to claim the award joining Davis and UMass’ Marcus Camby (1996).

The Naismith Trophy has been presented to the best player in college basketball since Lew Alcindor, who later changed his name to Kareem Abdul-Jabbar, received the first honor in 1969. Tshiebwe received the Kareem Abdul-Jabbar Award, emblematic of the nation’s best center, on Saturday as one of his major postseason accolades this year.

This marks the fifth NCAA-recognized electors for national player of the year honor that Tshiebwe has been awarded. He was also picked as the nation’s top performer by The Sporting News, the National Association of Basketball Coaches, the Associated Press and the United States Basketball Writers Association. The final award, the Wooden Award, will be announced on Tuesday. Tshiebwe is looking to become the first player in program history to become a unanimous selection for player of the year.

In addition to his offensive and rebounding prowess, on the defensive end Tshiebwe was the only major conference player who averaged at least 1.6 blocked shots and 1.6 steals per game during the regular season. He also became only the third player in program history to amass at least 500 rebounds in a season. Tshiebwe finished the year with 515 boards.

A consensus All-American, Tshiebwe corralled at least 10 boards in all but two games this season and finished the season with 21 straight games with double-digit rebounds. That’s a record for the Wildcats dating back to the 1967-68 season with complete game-by-game rebounding records. Dan Issel had two stretches of 12 such games. It’s also the longest stretch by any SEC player since at least 1996- 97. It’s also the longest streak in one season by any Division I player since Rokas Gustys of Hofstra had 23 straight in 2016.

Tshiebwe was elite on the glass from the very beginning of the season. He set new records for the Champions Classic and UK debut with 20 boards vs. Duke in the season opener, nearly tied the Rupp Arena record with 20 rebounds in his first home game, and then shattered that Rupp record with 28 boards vs. Western Kentucky. That easily surpassed Shaquille O’Neal’s previous mark of 21. It’s worth noting Tshiebwe did that primarily against the tallest player in college basketball, Jamarion Sharp, who stands at 7-foot-5. With 20 boards the following game against Missouri, his 48 boards tied for the most over a two-game span by any Division I player over the last 25 seasons (according to ESPN Stats & Info).

He concluded the season with 16 straight double-doubles, the longest streak since complete game-by-game rebounding records were kept dating back to 1969 for the Wildcats. He totaled 28 double-doubles this season which is a new UK single-season record.

At the conclusion of the season, Tshiebwe was responsible for 37.8% of all of UK’s rebounds. Taking away team rebounds, that number jumped to 41.2%.

Tshiebwe is racking up postseason honors by the day. The major honors he’s won so far include: