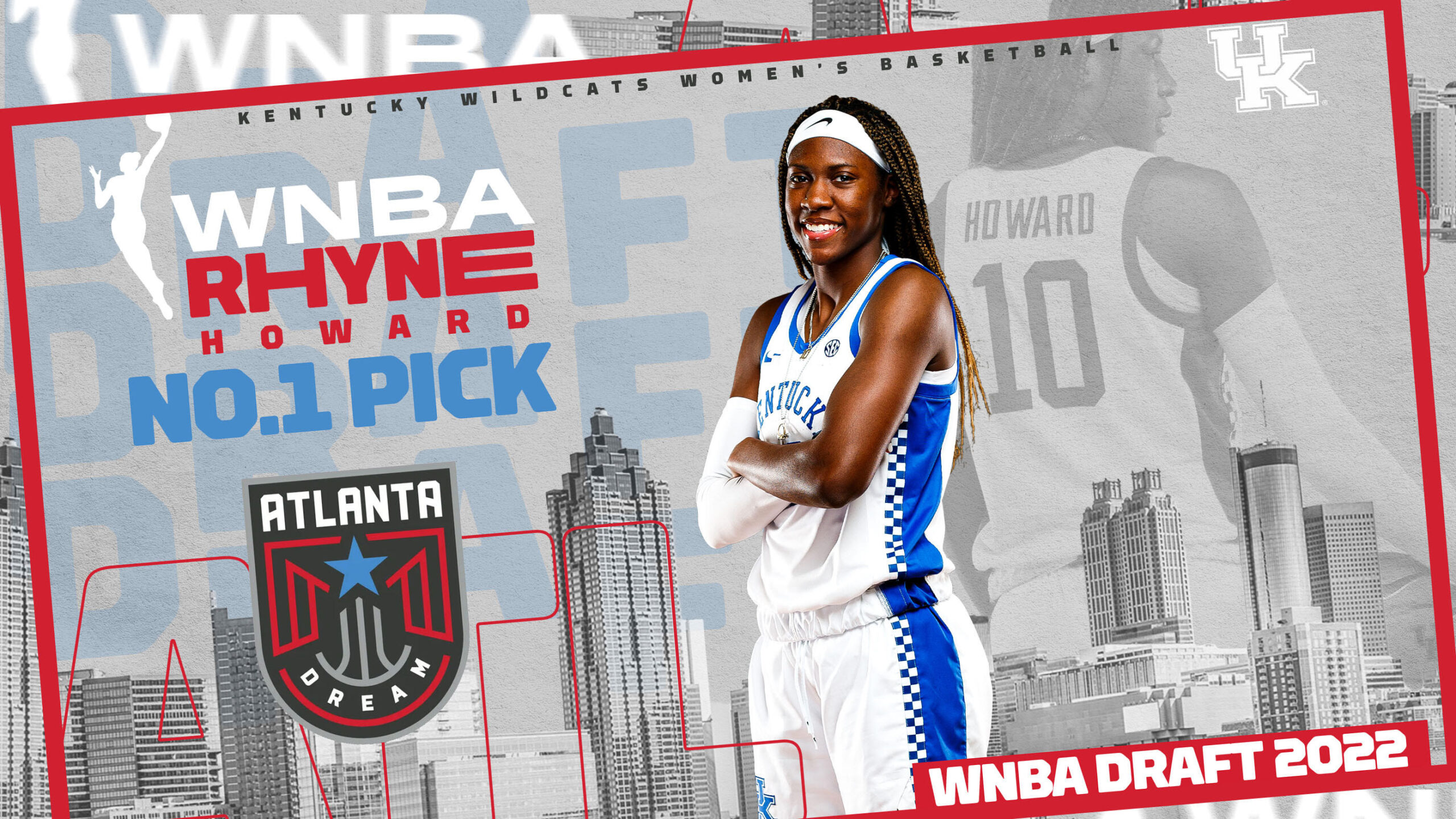 NEW YORK – Rhyne Howard, the most decorated player in Kentucky women’s basketball history, added another milestone Monday as she was selected first overall at the 2022 WNBA Draft by the Atlanta Dream. Held at Spring Studios in New York, Howard made history at the draft, becoming the first Kentucky women’s basketball player ever to be selected first overall.

The native of Cleveland, Tennessee, becomes the seventh player in program history to be selected in the WNBA Draft and the first since Evelyn Akhator and Makayla Epps were both selected in 2017. Akhator was previously the highest draft pick in school history at third overall. Howard, Akhator, A’dia Mathies and Victoria Dunlap are the only first-round picks in program history. Howard’s accomplishment makes Kentucky only the 16th program to produce a No. 1 WNBA Draft selection and one of only five schools in the league to produce such a player.

It was a storybook ending to her UK career, shinning on the national stage in the SEC Tournament, helping Kentucky to its first tournament title in 40 years. The guard was named the tournament’s most valuable player, becoming the second player in program history to earn that honor. Howard scored 88 points in UK’s four games at the event, marking the third most ever by a player in the tournament. The Wildcats won the championship with a huge upset victory over No. 1 South Carolina. Howard was amazing in the game, scoring 18 points with four rebounds, two assists and two blocks. In the semifinals, Howard scored 24 points against No. 15 Tennessee with seven assists, nine rebounds and two 3s. Howard led Kentucky to an upset victory over No. 6 LSU in the quarterfinals, scoring 32 points with six 3-pointers. The guard had 14 points against Mississippi State in the second round of the event.

During the final week of the regular season, Kentucky celebrated Rhyne Howard Day vs. Auburn as the guard played her final game inside Memorial Coliseum and went out in style. Howard scored 32 points in the game, which is the most points ever by a Kentucky senior on Senior Day. Howard hit eight 3s in the game, which was a new school record for 3s made in a game. She had six 3s in the first half, which was a new school record for 3s in half. The eight makes from long range gave Howard 272 career 3s, which made her the school’s career record holder in 3s made. Her 32 points were a season high and the performance gave her the second-most 30-point games in school history with nine.

For her career, Howard scored 2,290 career points sitting second in UK history in points scored. Against Vanderbilt, Howard scored her 2,000 career points, becoming just the third Wildcat in school history – both men’s and women’s – to record 2,000 or more points in 100 games or less. She joined Hall of Famers Dan Issel and Valerie Still in that category. Howard ranks second in school history in career scoring average at 20.1, while she is second in field-goals made with 790, first in career 3s made with 284 and fourth in career 3-point field-goal percentage at 38.2. She is also fourth in UK history in steals per game at 2.298.