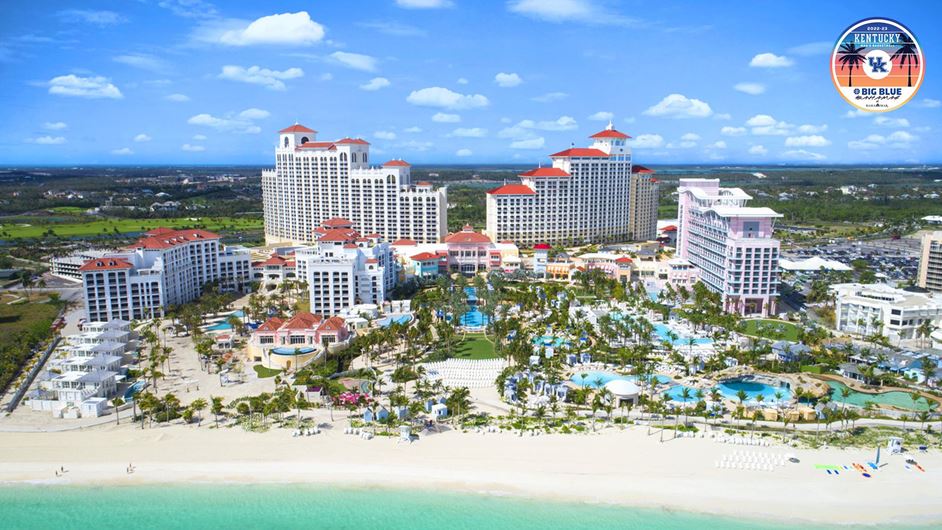 LEXINGTON, Ky. – Pack your bags, Big Blue Nation, because the Kentucky men’s basketball team is headed back to a memorable destination for a foreign basketball tour this August: the Bahamas.

The Wildcats will head to the beautiful Baha Mar Resort in Nassau for a four-game, seven-day trip from Aug. 8-14. UK will train at the world-class resort and play four games during its stay as it prepares for the 2022-23 season.

“I know our fans are excited as we once again make a trip to the Bahamas,” UK head coach John Calipari said. “This has always been a memorable trip for our teams and our fans, and it has always given us a springboard heading into the season. These games will be a challenge for us and will allow us to grow and see where we are at this point. We have a great mix of returning players and newcomers who want to use this opportunity to begin the preparation it takes to win a national title. That’s our goal and it all starts at Baha Mar.”

UK’s returning core is headlined by National Player of the Year Oscar Tshiebwe who led the country with 15.1 rebounds per game and also paced the Cats in scoring at 17.4 points per game. Kentucky will also welcome back Sahvir Wheeler who led the Southeastern Conference and ranked third in the country with 6.9 assists per game. Forwards Daimion Collins, Jacob Toppin and Lance Ware were all instrumental in helping the Wildcats to a 26-8 season a year ago and a No. 2 national seed in the NCAA Tournament.

Kentucky will welcome in four dynamic newcomers including top-10 signees Chris Livingston and Cason Wallace. Both players were Gatorade State Players of the Year and McDonald’s All Americans. Fast-rising prospect Adou Thiero inked with the Cats during the late signing period. UK also added one of the top transfers in Antonio Reeves Jr. who ranked among the top 20 individual scorers a season ago at Illinois State averaging 20.1 points per game.

This marks the third time the Wildcats have ascended on the Bahamas to serve as a tune-up for the regular season, and both previous times the Cats came away with positive results. UK first traveled to the island prior to the 2014-15 season which ignited a magical run that ended with an undefeated regular season, SEC regular-season and tournament titles, and a trip to the Final Four. Kentucky earned a 4-0 mark in the Bahamas in 2018, prior to going 30-7 and reaching the Elite Eight in 2019.

This will be the Cats first trip to Baha Mar, a 2,300-room resort anchored by a Grand Hyatt Hotel, and also features two deluxe hotel offerings, an SLS and Rosewood. The resort features a 100,000 square-foot casino, a new $250 million water park and the Jack Nicklaus-designed Royal Blue Golf Course.

Full information for fans wishing to attend can be found at KentuckyBahamasTour.com. All ticketing options will be sold online directly through the above link.

“Baha Mar is currently the hottest resort in the world and will provide a very appropriate, world-class destination location for Big Blue Nation,” said Brooks Downing, President and CEO of bdG Sports. “Our firm has been working with the Bahamas Ministry of Tourism for the past decade to attract premium sporting events to the country. We are excited to showcase the Baha Mar Resort and the natural beauty of the Bahamas to the University of Kentucky, the players and staff of this year’s team.”

Kentucky’s competition will include: