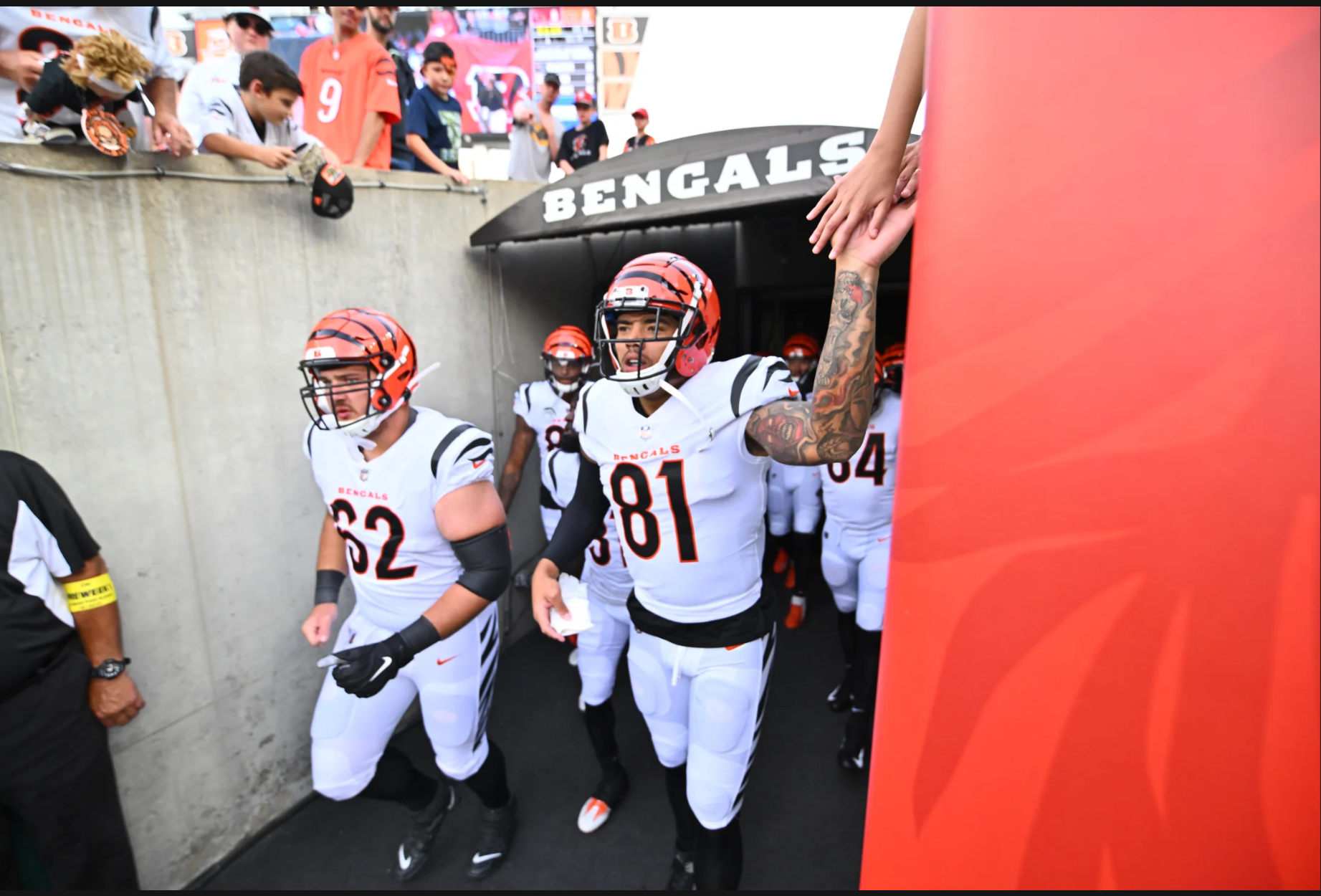 The Bengals’ return journey to the Super Bowl began with an exhibition loss to the Arizona Cardinals (Bengals.com photo).

(CINCINNATI, Oh.) – Jacques Patrick bulled his way in from the one-yard line and Drew Britt hit Kendric Pryor with a 25-yard touchdown pass as the Bengals finally tasted the end zone twice in the fourth quarter in a 36 – 23 defeat at the hands of the Arizona Cardinals.

“We set out to win the game,” said Bengals head coach Zac Taylor in his postgame press conference. “That didn’t happen today, so that part wasn’t what we wanted. But I thought the guys at the end of the game played with real good energy there in the fourth quarter. [They] responded [to] some adversity. So now we get a chance to really evaluate the full scope of the tape and see what kind of got us in the hole. I got a pretty good idea—some of the penalties and a turnover. See how guys responded from some of those bad times. Look forward to doing that tomorrow.”

At least it feels like it for media covering Cincinnati this year. The Bengals, fresh off of only their third Super Bowl appearance in the history of the franchise, were back and raring to go at it again.

And so were the media, buoyed by a magical ride to SoFi Stadium in Los Angeles in February, courtesy of a team no one thought had it in them to even make the playoffs—much less win three straight postseason games. Atmosphere wise, it felt just like old times—the pregame media buffet and postgame locker room access reestablished after a two-year hiatus due to that nasty Covid pandemic.

“Because we have such great personalities on this team that I want people to see that so they can appreciate that and enjoy it,” Taylor said. “So when they watch these guys on game days, they got their favorites that they’re pulling for. You can ask 20 different people who your favorite Bengals player is, and you’ll get 20 different answers. That’s a really cool thing about this team.”

I’m not sure I agree with Taylor. Ask 20 different people about their favorite Bengals player and 19 of them will tell you it’s quarterback Joe Burrow. Unfortunately, the NFL Comeback Player of the Year last season—entering year number three of his pro career—has been sidelined since earlier this summer after a surprise appendectomy.

“Every day has been a very encouraging day for him,” Taylor said. “I’m not going to make a prediction [on when he’ll return to game action].”

Taylor did hint that missing tonight’s game won’t be a hindrance in his star quarterback’s eventual comeback. Hardly any of the starters played in the first preseason contest anyway.

Protection of “Joey Franchise” is of paramount importance. Fortunately, management agreed, as evidenced by the beefing up of Cincinnati’s much-maligned offensive line. After Burrow was sacked more than any other quarterback last season, the Bengals’ front office came to their senses and wisely signed La’el Collins (right tackle), Alex Cappa (right guard), and Ted Karras (Center) to the roster. They’ll now join Jonah Williams and Jackson Carman as part of Burrow’s new and improved protection package.

For the record, Arizona easily won the preseason contest this evening. But like everything else that reeks of exhibition, most of the 60,760 that graced the newly named Paycor Stadium really weren’t fixated on who won or lost. Cincinnati’s defense, complete with their number one draft pick Dax Hill at safety, resembled Swiss cheese. Their offense, without the likes of Burrow, Ja’Marr Chase, Joe Mixon, and company, predictably sputtered over the first three quarters.

Brandon Allen started at quarterback for Cincinnati and completed all three of his passes for 29 yards before leaving the game with a concussion. Jake Browning took on the majority of remaining snaps, completing 13-of-24 passes for 190 yards with three fumbles (losing one) before Britt finished up with his curtain call.

The always dependable Evan McPherson drilled field goals of 23, 58, and 56 yards to account for the loudest cheers of the night.

“I thought it was kind of weird,” Money Mac admitted. “Because normally for a field goal, you kind of just stay quiet and that’s pretty much it. It’s kind of cool to see the crowd kind of get involved.”

“That was as good a crowd as I’ve ever seen for a preseason game,” Taylor said. “Probably the best I’ve ever been around to be honest with you. So, you could feel the energy and the excitement. Wish we would have come out a little faster to really give them something to cheer about that first half. We do appreciate the excitement. Just driving into the stadium, you could feel it. You could feel the energy all around the city. Just for preseason game number one, that’s really cool to see and we appreciate that.”

House money or not, it’s good to be back on the NFL beat.