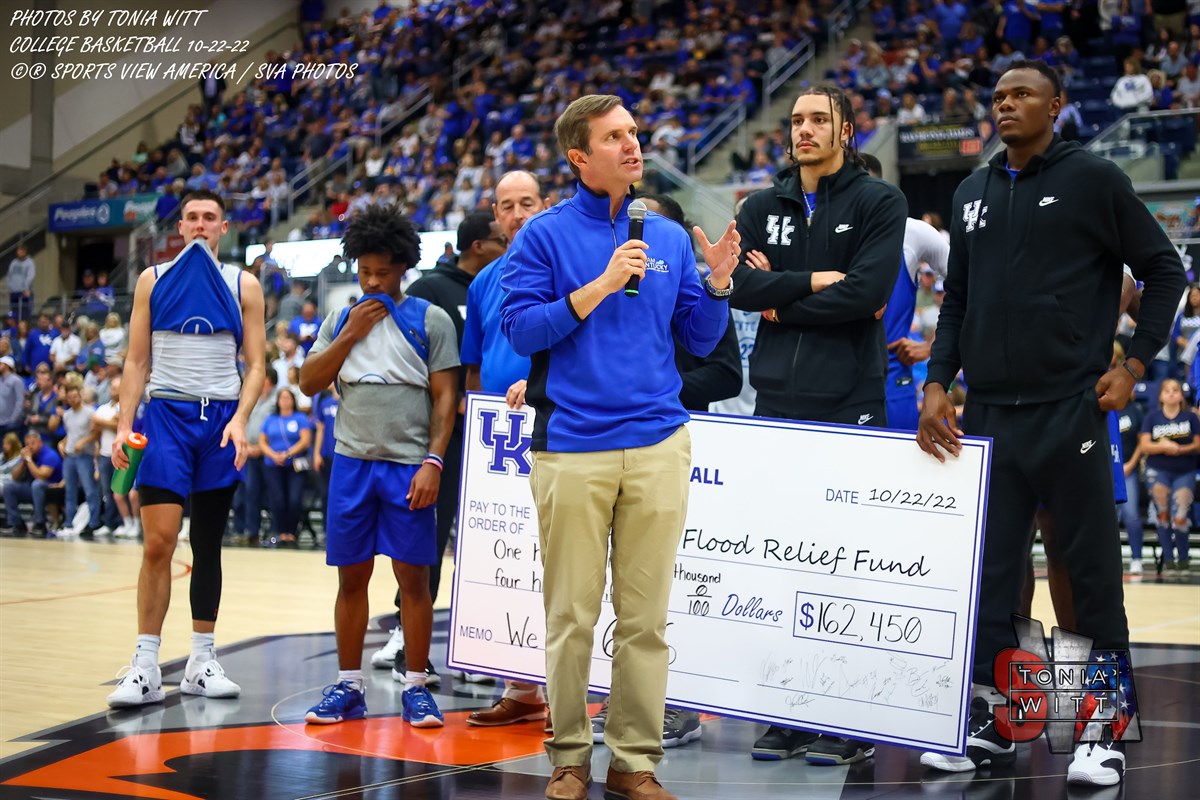 For the 2022-23 edition of the University of Kentucky Men’s Basketball annual Blue-White scrimmage, the team took the Bert T. Combs Mountain Parkway down to Pikeville in an effort to help raise money and awareness for the Eastern Kentucky flood victims.

As the team arrived in Pikeville around 4 p.m. the team exited the bus surrounded by sea of blue. Coach Cal took the stage to speak to the fans who arrived to the arena early, with the team joining him on stage shortly after. Some other highlights of the night outside of basketball was the presentation of a $162,450 check from the team towards the Eastern Kentucky flood relief fund. Governor Andy Beshear was in attendance, greeting numerous flood victims and Kentucky Basketball fans throughout the game and night. In the pregame address to the fans, Coach Cal notes that “We haven’t forgotten, that’s why we’re here” referring to the team making the trip to Pikeville for the Blue-White game this year. The scrimmage did tip off about 30 minutes later than expected due to some fans still making their way into the arena. During that time, the team progressed through some of their normal drills and warmups. Also of note is Sahvir Wheeler, Lance Ware, and Oscar Tshiebwe were inactive for the scrimmage. As always, there was some question in regard to the effort level that would be displayed by the team in a preseason team-on-team scrimmage. Early on, it was clear that the game would be played at a high level and a pace similar to that of a regular season game.

The first half started out with an early Thiero 3-pointer for the Blue team and a driving layup by Collins for the White team. Reeves and Livingston both displayed strong drives to the basket, with Wallace adding in a deep corner 3-pointer for the White team. With there being no true point guard on the white team, it was Reeves and Thiero who primarily handled the ball, with Reeves looking especially comfortable in transition with the ball in his hands. Onyenso (Fr.) (added to roster in August—missed Bahamas trip) made an immediate impact altering shot at the rim with 2 blocks in the first 8 minutes of action (finished with 4 blocks in the half). Thiero also made an early impact for the Blue team, scoring 11 points in the first 10 minutes. The team displayed premier athleticism in the first half, playing with high effort throughout and efficient scoring. Reeves led the way for the Blue team in the first half, scoring 22 points (4 3-pointers). Frederick and Wallace led the White team at the half with 15 points apiece. The halftime score being 52-48 White team over Blue team.

The second half was shortened to 10 minutes to allow for the team to have plenty of time to sign autographs for fans after the game. A key takeaway in the short half included Onyenso making some strong post position moves around the basket over Collins. The intensity of the scrimmage picked up even more in the final 4 minutes of action, the score being 65-63 Blue late in the game. The tight score allowed for coaches to draw up some designed plays for a chance to mimic a regular season possession. The White team drew up a 3-point attempt to Toppin, who drained it, giving White the lead with 35 seconds left in the game. After a failed possession by Blue, the White team took the win by a score of 70-67 in 30 minutes of action.

Overall, the ability of Reeves and Thiero to handle the ball was very impressive. Both looked confident and comfortable running the offense on the offensive end for the Blue team. Reeves led all scorers with 27 points in the game (5-12 from 3-point range). Onyenso and Collin’s ability to impact shots is something the Wildcats were missing last year and should compliment Oscar’s style of play well when they are on the floor together. Frederick also looked very comfortable on the court, making 4-5 3-point attempts in the game. The game featured high intensity effort and possessions throughout, with teams scoring efficiently but also playing with intensity around the rim on the defensive side.

The next chance to catch the UK Men’s Basketball team is Sunday, October 30 at 7:00 p.m. against Missouri Western State for an exhibition game at Rupp Arena.