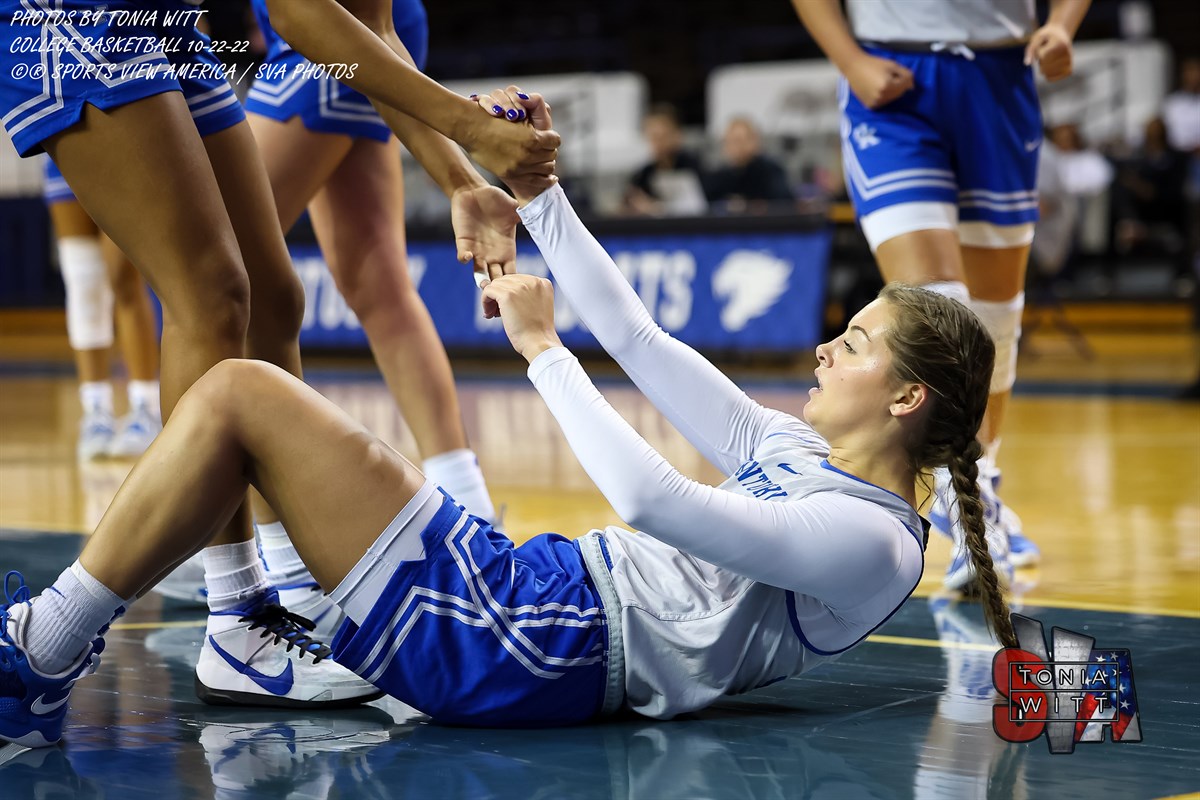 Lexington, KY 10-22-22
Saturday, October 22, the 2022-23 edition of the University of Kentucky Women’s Basketball team took the court for the annual Blue-White scrimmage at Memorial Coliseum. The scrimmage provided an opportunity for fans to watch the Women’s team in an organized scrimmage for the first time before the season officially start November 7 against Radford. The team was recently picked to finish 7th in the pre-season SEC media day poll.

In addition to the annual scrimmage, Saturday also acted as Fan Day for the Women’s team. Festivities included pre-game interviews on the court, a season poster giveaway, and a post-game autograph session. A reintroduction of the players to the fans preluded the tip of the scrimmage. The scrimmage was normal game length in the form of four 10-minute quarters. The Blue team featured most of the projected impact players for the Wildcats this season. The starting five for the Blue team included Scherr, Benton, Green, Walker, and Leveretter. The White teams starting lineup featured King, Thomas, Russell, Tyler, and Petty.

The scrimmage was slow offensively to start, with both teams going scoreless for the first several minutes. The first score saw Freshman Amiyah Jenkins drive to the basket for a layup for the White team. Jada Walker quickly pushed the ball down the court to even the score for the Blue team the next possession. Tempo was a focus for the team to start the scrimmage. Some notable plays in the first quarter included a confident display of shooting from Blair Green in the mid-range area and a strong driving layup from Cambridge that resulted in an and-one layup. The score at the end of the first quarter was 11-6 Blue over White.

The second quarter saw the Blue team start to take control of the game. The Blue team looked much more comfortable moving the ball on the offensive side and stepped up their defensive intensity leading to a multitude of turnovers. The quarters highlights included a no look assist from Scherr to Green for an easy transition layup and a strong finish at the basket from LSU transfer Ajae Petty. The halftime score was 40-17 Blue team.

In the second half the deep shots started to fall for the Blue team. The featured scorers in the half being Blair Green and Jada Walker, both making multiple 3-pointers throughout the half. Turnovers still an issue throughout for both teams, but the offense looked to be running much smoother than in the first half. The score at the end of the third quarter was 70-28 Blue. The final score of the scrimmage was 91-47 Blue team over White team.

One of the key takeaways from the scrimmage was the overall effort displayed by the Wildcats on both sides of the ball. The two teams totaled 20 steals combined in the game. While the team lacks a go-to post presence down low on the offensive end, the length of Thomas, Adeyeye, Petty, and Leveretter is apparent and can disturb teams in passing lanes and by altering shots at the basket. The confident display of shooting by Green and Walker proved that duo can be efficient in their decision-making and scoring ability, as they combined to go 23-32 in field goals for 55 points. Another takeaway was Scherr’s ability to handle the ball in both half court sets and in transition, having great court vision and distributing the ball effectively to open teammates. Overall, the Blue-White scrimmage was a success for the Wildcats on Saturday, helping highlight their strengths to build upon and weaknesses to refine before heading into the regular season in the coming weeks.

The next chance to watch the UK Women’s Basketball team is Wednesday, November 2 at 7:00 p.m. against the University of Pikeville at Memorial Coliseum.