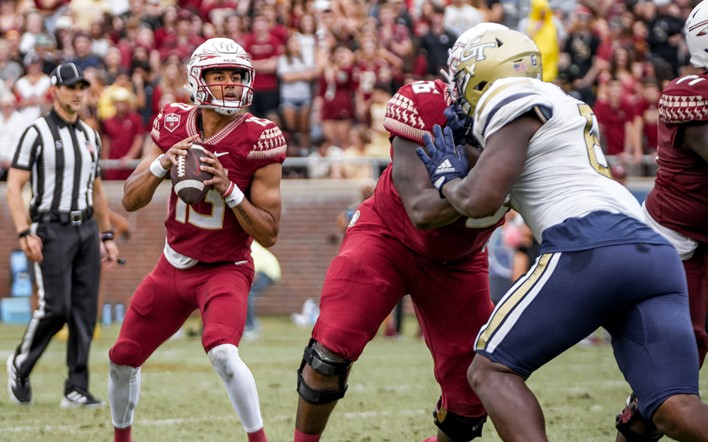 Florida State churned out a season-high 642 yards and held Georgia Tech to just 2-of-13 on third-down conversions in a 41-16 win in Doak Campbell Stadium Saturday afternoon.

FSU quarterback Jordan Travis completed 24-of-38 passes for 396 yards and a career-high-tying three touchdowns.  Running back Trey Benson led all rushers with 111 yards on 18 carries.  Lawrance Toafili gained 70 yards on 13 carries and scored once on the ground and on a 62-yard reception.

Georgia Tech quarterback Zack Pyron was under heavy rush all day but completed 18 of 28 passes for 198 yards and a touchdown.  No Yellowjacket running back gained over 50 yards.

Georgia Tech scored first taking a 3-0 lead on a 38-yard field goal with 3:58 left in the first quarter.  It looked like FSU would score first but the Seminoles fumbled a direct snap from the Tech one-yard line and Charlie Thomas scooped the ball and raced 71-yards to the FSU 24 before being tackled from behind by Jordan Travis.

The Seminoles took the lead for good 7-3 on Toafili’s seven-yard touchdown run with two seconds left in the first quarter.  The score capped a nine-play, 80-yard drive that began on FSU’s 20.

Florida State stretched its lead to 14-3 with 10:34 left in the half on a 78-yard touchdown pass from Jordan Travis to Johnny Wilson who shook off a defender at midfield and raced to the end zone.

The Noles increased their lead when Jordan hit Toafili perfectly in stride on a seam route and he took it 62 yards for a touchdown to put the Noles up 21-3 with 2:52 left in the second quarter.

The Seminoles made it 25 unanswered points in the first half with a 35-yard Ryan Fitzgerald field goal as time expired taking a 24-3 lead at the half.

FSU’s defense completely dominated Tech in the first half allowing just 24 yards of total offense and one first down.

The Yellowjackets surprised FSU with an onside kick to open the second half taking over at the FSU 44.  Five plays later, quarterback Zack Pyron hit EJ Jenkins with a 32-yard TD pass to cut the Seminoles’ lead to 24-10 just under two minutes into the third quarter.

FSU bounced back on the ensuing possession driving 91 yards on 12 plays capped by a 24-yard TD pass from Travis to Ja’Khi Douglas to go up 31-10 with 13:06 left in the third quarter.

FSU’s final score came with 1:09 left and with a number of starters on the bench.  The Seminoles used 12 plays to drive 97 yards with running back C.J. Campbell scoring on a 7-yard run to make it 41-10.

Georgia Tech scored with no time left on the clock and an extra point was not attempted to make the final score 41-16.

Florida State will travel to Miami next Saturday to face the Hurricanes at 7:30 p.m. on ABC.