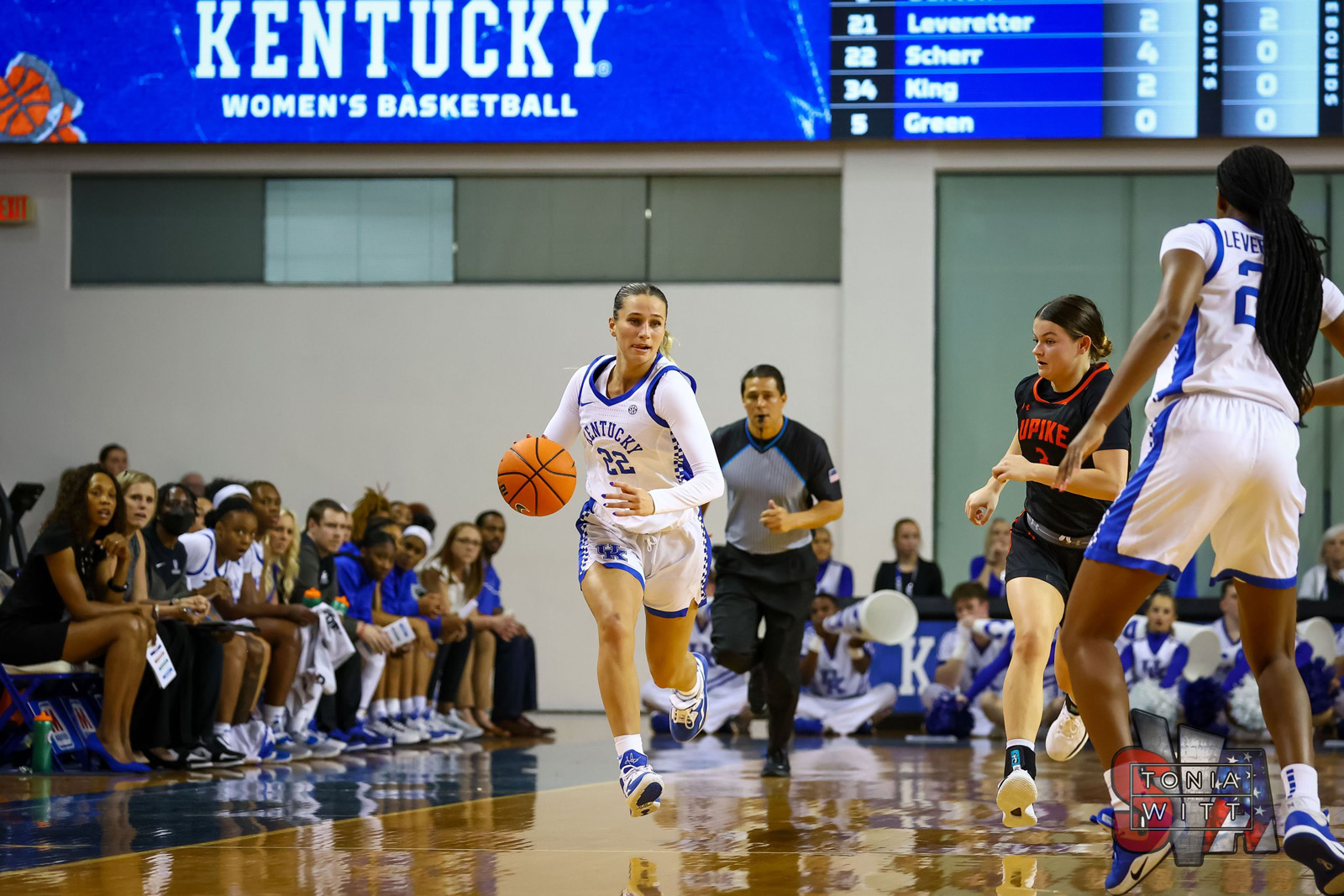 The Wildcats took on the University of Pikeville Bears on Wednesday night in the only exhibition game of the season before the regular season kicks off next week. The Bears are led by head coach Clifton Williams, who is in his 7th season at UPIKE. The Bears are in the NAIA and made the NAIA postseason tournament last season, winning their first-round game before being eliminated in the second round. For the Kentucky Women’s Basketball team, the exhibition game acted as the first look at the ‘Cats in a competitive game that was not scrimmage based.

The first score of the game saw Scherr drive to the basket for an easy layup. Early on it was clear the ‘Cats would be active in the passing lanes throughout the night, with four deflections leading to four UPIKE turnovers in the first 2 minutes of action. Kentucky started the game with a 17-2 run, eventually growing the lead to 25-7 at the end of the first quarter. LSU Transfer Ajae Petty showed off her athleticism and length with a steal and putback layup in the quarter.

The second quarter started with a quick cutting layup by Benton. Scherr added in a steal and a assist to Green for a layup to bring the lead to 33-8 ‘Cats a couple minutes into the quarter. Adeyeye was active on the boards in the second quarter, finishing the half with 12 total rebounds (6 offensive and 6 defensive). Freshman Cassidy Rowe saw her first action of the game midway through the quarter, as she was tasked with point guard duties with Scherr on the bench. She showed off her court vision with a no look assist for an easy layup. Petty led the scoring effort for the ‘Cats with 10 points. The ‘Cats team defense induced a whopping 17 first half turnovers from UPIKE. Kentucky led 43-14 at the half.

The third quarter scoring started with a Walker stop-and-pop mid-range jumper. Scherr then quickly followed with the first 3-point FG of the half. Scherr and Benton were both active on the defensive end for the ‘Cats in the quarter, while also leading the charge on the offensive end. Amazingly, the ‘Cats first free-throw attempt of the game came midway through the quarter. A 10-0 run at the end of the quarter saw Kentucky’s lead grow to 74-28 at the end of the 3rd.

Benton again started the scoring in the fourth quarter with another driving layup. The ‘Cats started the quarter slow, as they only outscored the Bears 9-7 4 minutes into the quarter. With both teams getting some of their bench players in the game, the pace and efficiency of the offenses slowed. Petty continued to impress throughout the quarter, consistently gaining position on the post and getting open looks around the basket. The Bears went on a late 8-0 run of their own that saw the score draw to 88-43 Kentucky. The final score saw the ‘Cats come out with a 93-45 win.

Some key stats saw Kentucky outrebound UPIKE 59-37. Of the 59 Kentucky rebounds, 24 were offensive, leading to 26 second chance points. The ‘Cats ability to drive to the basket and gain position in the post led to 76 of their 93 points being scored in the paint. Kentucky’s defense constricted UPIKE’s offense to a 21 FG% (just 15 % from 3-point range). The Bears did improve their ball protection in the second half, finishing the game with 25 turnovers (17 in first half). Kentucky finished the game with 13 turnovers of their own. The leading rebounder was Adeyeye with 15 boards in the game. The leading scorer in the game was Petty with 15 points. In the second half, it was clear the ‘Cats were focusing on getting Petty the ball and running the offense through her at times. Benton and Walker were just behind Petty with 14 points of their own. Scherr and Petty made an immediate impact on their new team I their first competitive game of the season. Scherr was comfortable with the ball in her hands, driving and distrusting the ball as needed to open teammates, and making open shots of her own (2-2 from 3-point range in the game). Petty was athletic, long, and strong in the post, consistently getting to her spot and getting in passing lanes that led to easy transition baskets for the ‘Cats throughout the game.

The next game for the Wildcats is Monday, November 7 against Radford at 7:00 p.m. at Memorial Coliseum in the fist game of the regular season.