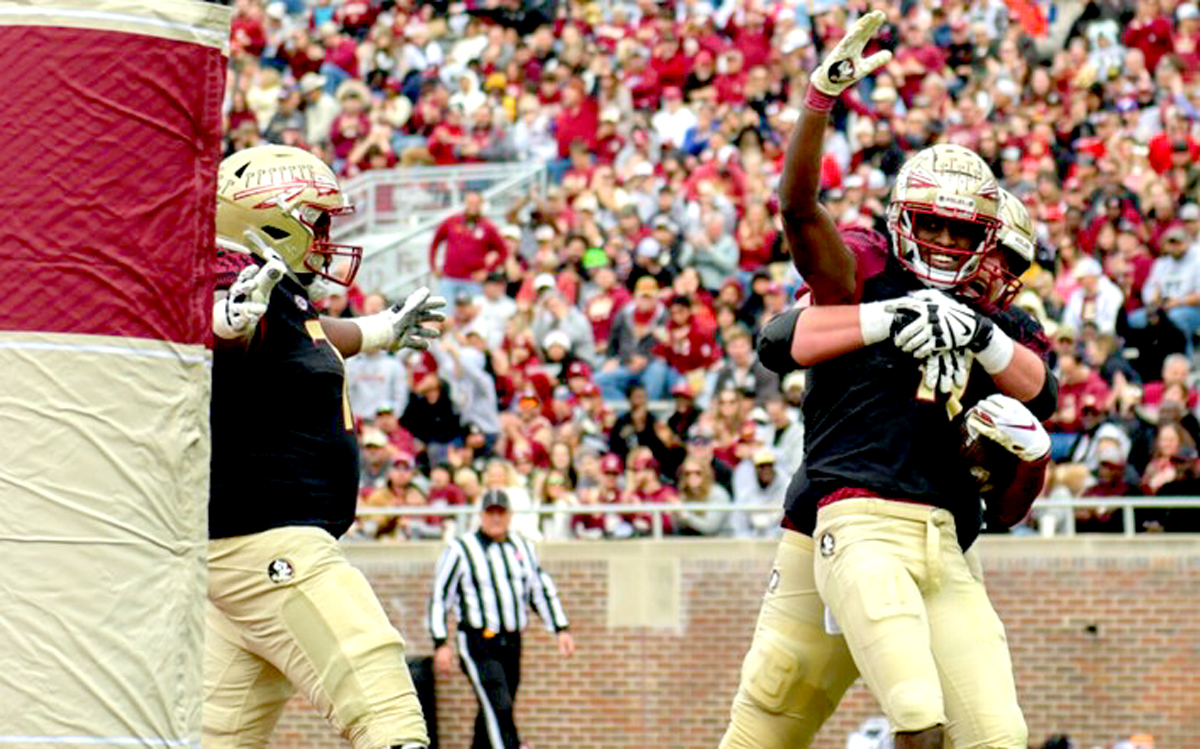 » Florida State improved to 8-3 with a 49-17 win Saturday vs. Louisiana. It was the
first meeting between the teams. Head coach Mike Norvell is now 19-5 in the month of
November, including 3-0 this season.
» FSU has won four consecutive games by at least 25 points, the longest active streak
in the nation, the second-longest streak in the country this season and FSU’s longest
since a nine-game streak in 2013.
» Quarterback Jordan Travis ran for a pair of touchdowns – from 3 and 13 yards – and
is now 11th in FSU history with 22 rushing touchdowns in his career. Travis was 9-for-14
passing for 112 yards and one touchdown; he had 38 yards on five rushes with two TDs.
» Along with being 11th in career rushing touchdowns, Travis is also: 13th in career
passing yards (5,200), 20th in season completions (186), 13th in career completions
(386), 16th in season passing touchdowns (21) and 11th in career passing touchdowns
(42).
» Travis has completed at least 60 percent of his passes in 12 of his last 15 games.
Over the past three games, Travis has accounted for 11 touchdowns and thrown nine
incompletions.
» Florida State ran for 251 yards, the sixth consecutive game rushing for over 200
yards and the seventh this season. The last time FSU had a longer 200-yard rushing
streak was 1987, when FSU did it in seven consecutive games.
» Treshaun Ward scored a 36-yard touchdown – the longest of his career – out of the
wildcat formation on FSU’s opening drive. He added a 1-yard touchdown in the second
quarter, and Ward and Travis both tied their career-high rushing touchdowns.
» The last time FSU had two players with multiple rushing touchdowns in the same
game was December 2, 2017, when Cam Akers and Jacques Patrick both scored twice
against ULM. FSU ran for five touchdowns, its second game this year with five or more
rushing touchdowns (6 vs. Duquesne).
» Travis and Ward now have five rushing touchdowns on the season, tied with
Lawrance Toafili for second on the team. Trey Benson – game-high 80 yards and a
touchdown – leads FSU with six. Entering Saturday, Georgia and Tennessee were the only
teams with four players with five or more rushing touchdowns.

Douglas for a third-quarter touchdown, both players first of their career.
» ACC Defensive Player of the Year candidate Jared Verse had a sack on Louisiana’s
first drive of the second half. His 7.5 sacks and 14.0 tackles for loss are the most on
the team, and he has at least 1.0 tackles for loss in all 10 games he has completed. He
entered the game leading the ACC in sacks (0.72) and tackles for loss (1.4) per game.
» DJ Lundy earned his second start of the year and had 1.5 sacks, matching his
career total. He is the 14th different Seminole with at least 1.0 sack this season…Joshua
Farmer had a fourth-down sack. He has 2.0 sacks and his 6.0 tackles for loss this year
are the most among ACC freshmen…FSU’s four sacks tied a season high (Georgia Tech,
Wake Forest, LSU).
» Defensive back Jammie Robinson had six tackles, all in the first half. He had 1.0 TFL
and one of FSU’s season-high nine pass breakups. Robinson also returned a punt seven
yards, his first as a Seminole…Lundy and Brendan Gant also had a team-high six tackles.
» Defensive tackle Fabien Lovett forced a fumble in the third quarter that was
recovered by Shyheim Brown. It was Lovett’s first career forced fumble and Brown’s first
recovery. Florida State has recovered seven fumbles this season.
» The Seminoles did not allow a sack for the third time this season and only the 15th
time in the last 10 seasons. The last time FSU allowed 0 sacks in three games during the
regular season was 2012; the last time FSU allowed 0 sacks in three games all against
FBS opponents was 2009 (4 times in regular season and vs. West Virginia in Gator Bowl).
» The Seminoles held Louisiana to 46 yards in the first quarter and 121 in the opening
half. FSU’s defense is holding opponents to an average of 128.8 yards of total offense in
the first half, with an average of 56.3 rushing yards and 72.6 passing yards in the first
half of games this season.