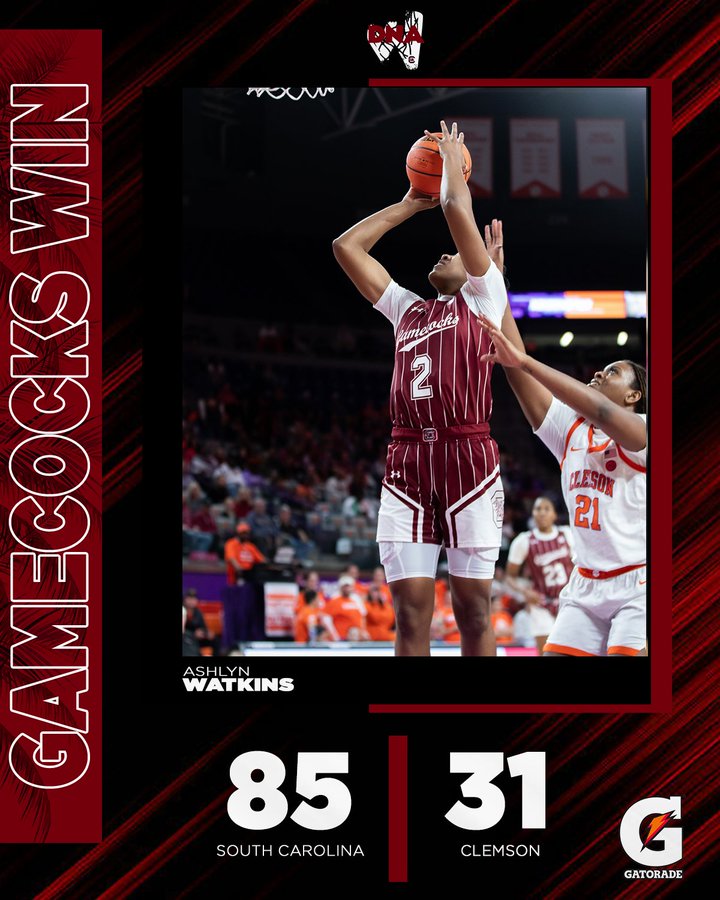 It was the Gamecocks’ 12th straight win over their rival.

Five-star freshman Ashlyn Watkins had 14 points, including a fourth-quarter, one-handed dunk that brought the South Carolina bench to its feet in celebration.

The Gamecocks (3-0) used smothering defense and on-target shooting to put away the Tigers (3-1) with a 16-2 run in the opening period to take control.

Clemson had no answers for the defending national champions, who shot 64% in the first 20 minutes while holding their opponent to 7 of 27 from the field to lead 46-16 at the break.

The highlight for Clemson came early — very early — when Brie Perpignan’s layup put the Tigers up 5-2 less than two minutes in. South Carolina then took off on a 16-2 run, making seven straight shots to take control.

Cooke came up slowly after one first-quarter collision and went to the bench. But after a few minutes with a muscle-loosening device on her left thigh, re-entered and continued her perfect half (she was 4 of 4) as she drained a 3-pointer right before the buzzer to end the first quarter.

But the Tigers went cold and missed 16 of their 18 second-quarter attempts. Clemson finished with the fewest points in a game in coach Amanda Butler’s five seasons.

South Carolina, who rely more on smothering defense than accurate outside shooting, had both in this one. The Gamecocks shot 68% the first 20 minutes and made all five of their 3-pointers.

Even Victaria Saxton, the 6-foot-2 forward known for her inside game, joined in the shooting party with her first collegiate 3-pointer in three career attempts just before halftime for a 30-point lead.

Cooke, Boston, Bree Beal and Saxton, all starters on last year’s NCAA title winners, sat out the final quarter with the game well in hand.