Skip to content
You are here
HOME PAGE / 01 FEATURED / Whispering About the Wildcats – The Kentucky Wildcats Fight to the End, but Come up Short 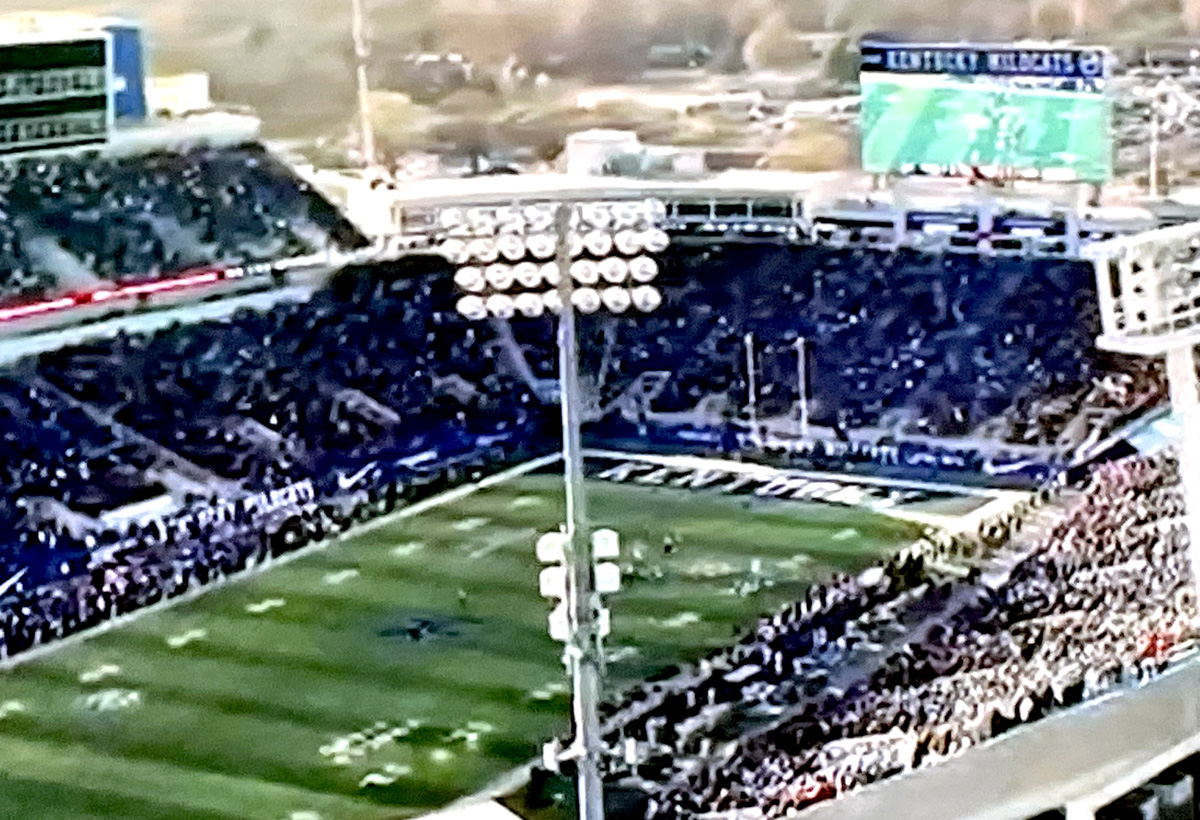 Kentucky falls to the #1 ranked Georgia Bulldogs 16-6 in what continues to be a disappointing season.

Most Kentucky fans did not expect to beat Georgia going into the season, but it was a hope that the Wildcats would come into this matchup fighting for a chance to go to the SEC Championship game in Atlanta.  Instead the Wildcats limped into the game off a disastrous loss to a Vanderbilt team that had lost 26 straight SEC games.  Factor that in with disappointing losses to Ole Miss and South Carolina and this has been one of those seasons of what could have been.  Now the Wildcats find themselves fighting to finish the regular season with an above .500 record as they go into their last game of the season, playing the arch rival Louisville Cardinals.

For today’s game it was a gritty battle between two strong defenses with Georgia’s coming out on top.  The defending National Champions looked every bit the part as they outplayed the Wildcats from start to finish on this blistery cold day at Kroger field.  It was the Wildcats that seemed to be frozen to the turf especially during the third quarter of the game.

The Wildcats received the opening kickoff and mishandle the football after signaling a fair catch, so they had to start from their own four yard line.  Kentucky challenged the call because it looked like Barion Brown was reaching up to catch the ball and not signaling for a fair catch.  But after the review the call stood as called on the field.

After two unsuccessful runs and a procedure penalty.  UK quarterback Will Levis finds Barion Brown down the right sideline for a 31 yard completion and a Wildcat first down.

The Wildcats moved down to the Georgia 31 yard line, but were stopped on fourth down and relinquished the ball over to the Bulldogs.

Georgia had a 13 play drive that was stopped at the Kentucky 10 yard line and led to a Jack Podlesny 27 yard field goal which gave the Bulldogs an early 3-0 lead.

After the ensuing kickoff went out of the end zone.  Kentucky started from their own 25 yard line.  Two passes from Levis to Dane Key put the ball out to midfield.  With Kentucky facing a 3rd and 11 the first quarter came to an end.

A hands to the face defensive penalty by Georgia kept Kentucky’s drive alive and moved the Wildcats into Georgia territory for a second consecutive drive.

After several running plays, Levis kept the ball on a quarterback draw down to the Georgia 16 yard line, but was injured on the play.  Freshman quarterback Kaiya Sheron came in for one play, but then Levis returned.  On third down, Leviss threw an interception into the end zone.  Georgia’s cornerback Kelee Ringo returned the ball out to the 47 yard line.  This ended Kentucky’s hope of taking the lead.

Georgia drove down to the Kentucky six yard line, but the Wildcat defense once again stiffened and the Bulldogs had to settle for another field goal.  The Podlesny 24 yard field goal gave the Dogs a 6-0 advantage.

After the Georgia score, the Wildcats could not move the football and were forced to punt.

Georgia then had an 11 play drive, which went down to the Kentucky 19 yard line, but again the Kentucky defense was able to put a stop to the drive and this led to another Podlesny field goal.   This field go was from 37 yards out.  The made field goal gave Georgia a 9-0 lead at halftime.

The biggest difference in the first half was taking advantage of opportunities.  The Wildcats had two scoring opportunities, but came away with zero points.  On the other hand, Georgia scored field goals on each of their three possessions.

Kentucky comes up with a huge play on Georgia’s first possession of the second half, when UK safety Jordan Lovett intercepted a UGA quarterback Stetson Bennett pass at the Kentucky eleven yard line.

The Wildcats blow a great opportunity to get some momentum going their way as the offense was held to a three and out after the crucial interception.

After the Kentucky punt, Georgia drives 58 yards on eight plays, which was capped by a nine yard Kenny McIntosh touchdown run which gave the Bulldogs a 16-0 lead with 6:22 to go in the third quarter.

Once again Kentucky ran three plays and then punted.

Georgia had moved the ball down to the Kentucky one yard line when the quarter ended.

The Wildcats defense made a great fourth down stop at the goal line to deny the Bulldogs offense of extended its lead.

The Kentucky offense inspired by the defensive stand goes on a 9 play 99 yard touchdown scoring drive.  The longest scoring drive of the season for the Wildcats.  This touchdown drive ended with a eight yard pass from Levis to Brown.  The Wildcats were unsuccessful on their two-point conversion try.  The score cut the UGA lead down to 16–6.

Kentucky with Levis targeting Barion Brown moved the ball down to the Georgia 20 yard line, but could go no farther and had to settle for a field goal attempt.  The 37 yard Matt Ruffolo attempt sailed wide left and the Cats were left with what could have been.  This missed opportunity was the final nail in the coffin for the Wildcats.

The Kentucky defense had a lot of standouts and were led by Jordan Wright’s 10 tackles, but four other Wildcats had eight or more tackles, so it was a total team effort.  The Wildcat offense was stagnate for most of the game, but came alive late.  Levis finished with 206 yards passing and 26 yards rushing, while freshman receiver Barion Brown had a career high 145 yards receiving on ten catches.  It was not the most exciting game, but at least the Wildcats showed up and gave their best effort.

With the loss the Wildcats fall to 6-5 on the season.