Skip to content
You are here
HOME PAGE / 01 FEATURED / Whispering About the Wildcats – UK shows little effort in loss to Gonzaga, Coach Cal blames loss in part on Oscar 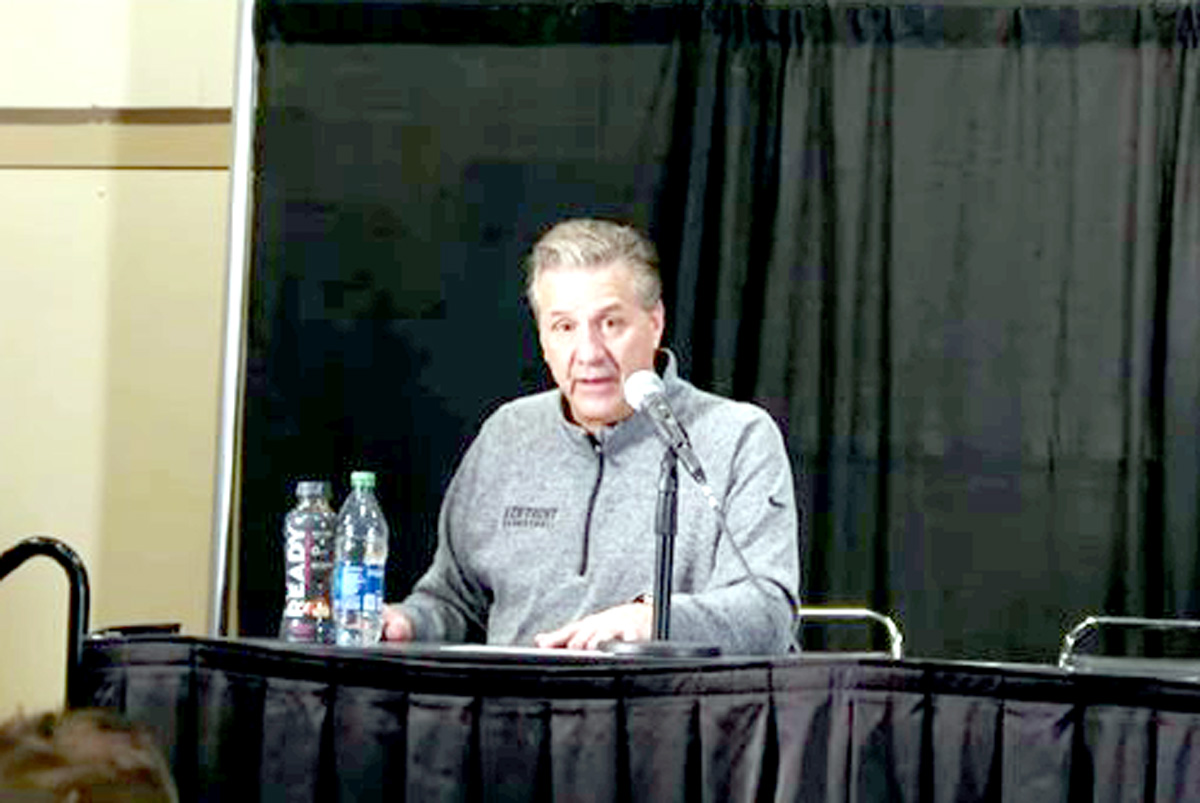 Spokane Washington 11-20-22
This was supposed to be aa matchup of two of the best teams in the country. #2 Gonzaga against the #4 ranked UK Wildcats. It definitely did not turn out to be the contest most fans expected. In fact, it was an embarrassing display by UK especially in the first half. Both teams had a common opponent already this season in Michigan State. Gonzaga defeated the Spartans by 1 point and Kentucky lost in double overtime to Michigan State, so this game figured to be a close contest.

Kentucky, contrary to Kentucky Coach Cal’s post game comments, have had several games together as well as practice time. Kentucky played in the Bahamas, played a couple exhibition games and 4 games in the young season. Oscar Tshiebwe has played in all but 2 of those contests. Why is it significant to bring up Oscars playing time? Simply put, Coach Cal tossed his Player of the Year workhorse, under the bus as a big reason why UK lost the game. Never mind that Tshiebwe is in his second year with UK and has played in at least 8 contests since this season started. Never mind that Oscar had 20 points and 15 rebounds despite, according to Calipari, that he didn’t know the plays due to lack of practice time.

Kentucky, who came out extremely flat, played lackadaisical and couldn’t throw the ball in the ocean in the first half. Not all of this is on Coach Cal, as Cal doesn’t shoot the ball, make passes or rebound the ball. As one ESPN analyst said during the halftime show, UK was out played, out hustled and out-coached. Cal again appeared to be late in making adjustments, waiting until the second half. UK didn’t run any plays and moved very little without the ball. Tshiebwe looked exhausted at times, partly because his motor is going non stop, again, he still had 20 points and 15 boards against the number 2 team in the country.

It is odd that Coach Cal would blame his best player for not running plays and lack of practice time as an excuse when this team has played and practiced together for at least 8 games. I have never believed in throwing any player under the bus as an excuse for losing especially not a Player of the Year player with a full season under his belt in your system.

This is the second game that UK has not made the proper adjustments to win the game. Kentucky blew two absolute golden opportunities against Michigan State only to lose a very winnable game. Against Gonzaga, they got the lead to as close to 4 points in the second half before running out of steam. Gonzaga made the right moves down the stretch and ended up with a solid 88-72 win.

Kentucky fans have expressed a growing sentiment that they are tired of excuses by Coach Cal and want results. With the talent UK has had over the years, most Kentucky fans have expected a National Title and want to win every game. After a terrible losing season two years ago then last seasons 1st round exit in the NCAA Tournament, UK fans are losing patience with their Cats not showing up to games like against Gonzaga or blowing games like they did against Michigan State.

Below is Coach Calipari’s press conference after the loss to Gonzaga.

Coach Cal’s transcripts after the Gonzaga beat down.

And Gonzaga played well. They played well. We only had 11 turnovers. You want to know, though? When we got the game to four, there were two of them right then. What? And we gave up a three and we fouled, and all of a sudden it’s back to nine. What in the world just happened?

I had to change how we were playing offensively at halftime. What did you see, if you know basketball? What did I do? So most of you really don’t know. I couldn’t get Oscar (Tshiebwe) to run the plays right. You know why? He hasn’t been practicing with us. So I said, Go to the baseline. We’re going to play dribble drive around you. And that’s what we did the whole second half. I ran two plays. That were pass, pass, make a play. Couldn’t run a play. Told them, man, you know, we got to practice and get together as a team and get better.

Offensively in the first half it was so embarrassing that we couldn’t even run a play. Couldn’t run a play. Not one. And it wasn’t just Oscar. It was our guards too.

But here’s the great thing. We come back and get it to four or five and have our chance to win the game and that’s when I want to see who can step up and make plays. I’ve got to watch the tape and see where the breakdowns happened because we, that would have been one of the great wins of all time.

But I think we only had a few people thinking we were going to win that game. Didn’t have enough on the bench, like, you know, let’s go. We got this. And they played well.

JOHN CALIPARI: Well they lost, they —

So I mean, we’re a ways away. He took too much time to shoot balls in the first half, so he had two turnovers. There were balls just ripped from him. But, again, we missed, you can’t miss every open shot. Missed a layup. I think Oscar may have grabbed that and dunked it. I can’t remember.

Most of the time, like I say, guys, I got to watch the tape.

JOHN CALIPARI: Just didn’t make ’em. They’re not machines and robots. But like I said, we had some guys, like miss like almost every shot. Can’t be that guy. And we had guys play a lot of minutes and miss almost every shot.

We got the game close and that’s why I wasn’t subbing. I tried to put Ugonna (Onyenso) in and his man dunked one on him. We’re learning. I would like to have played Chris (Livingstgon) more, but what I ended up doing is we needed a bunch of shooters out there to get back in the game. So that’s what I did. I put shooters out there.

JOHN CALIPARI: It’s early. Start the game. It’s early. Sometimes that’s the worst thing that can happen to you. You’re up 22 and all of a sudden at halftime you’re up six. So, early in the game, I’m not that worried. I was a little worried that they were imposing their will on us instead of us — we talked about it for two days. We have to impose our will on them or you won’t win this game. And we didn’t do it. We just didn’t.

JOHN CALIPARI: I’ll just play different guys, whoever wants to fight. I’m going to play different guys. We got enough guys. I let those guys get in there and fight and understand, when you’re into your own head about how you’re playing instead of just play for us, and we’re training every day about playing a certain way, play that way.

And we got — look, I wouldn’t trade my team for any team in the country. I wouldn’t. I wouldn’t. I’m not happy right now. We lost the game that we start awful, can’t make a shot, get back in the game, and then when you do all that, you finish those off. It shows we’re not ready. It was Michigan State. We had a chance to finish people off and we, you get up five and six and all of a sudden you miss a layup, you miss a free throw, all that stuff is coming back to haunt us.

But it’s a long season. Like I said, it’s November. They’re good. They played great teams. We’ve had our share of games and now it just keeps going. We still got a bunch of really good teams and our league is real good too.

The biggest thing happened to us offensively is we couldn’t run anything because we had one or two guys, we haven’t practiced enough. So we were trying to run stuff, and I’ll just be honest with you, the first play of the game, prior to the game, I did it in the huddle, I did it before they walked on the court, the guy went the wrong way. Like what just happened?

So we have to demand the execution of what we’re trying to do. But to be honest, dribble drive may be the best way for us to play. Stand on that baseline, get open, we’ll try to throw it to you. Run in transition, we can post it. Short of that, we’re going to play this way. And I think we can play that way some, and other games you got to screen, you got to make hard cuts. You got to, you know.

But like I said, I wouldn’t trade this team. We’re good. I shortened the rotation in the second half because I was trying to win the game. Just I didn’t play a whole lot of people. I was like let’s get out of here and try to win.